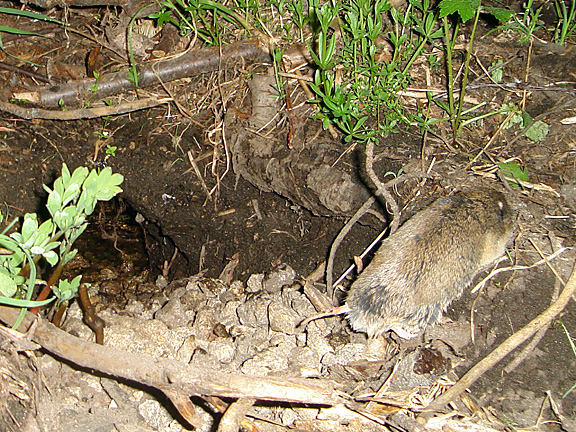 It's not a very good picture of a gopher, and I am not even sure of the species.

It could be the montane pocket gopher, but I suspect it's the common garden variety -- Botta's pocket gopher. Both occur in the area.

Yes, we are still at the Aplodontia burrow in the thicket beside the Yuba River.

I am posting the photo because camera trapping a pocket gopher is a rare event.

At night gophers do move about above ground, especially when dispersing from their natal range, or the land of their birth.

That's when the barn owls pick them off, and judging from the abundance of pocket gopher remains in owl pellets, there's a awful lot of nocturnal gopher traffic above ground.

Apparently this gopher succumbed to wanderlust too, and Bill's camera captured three images of it when it stumbled into the showtl burrow.

In the last photo it is heading in the opposite direction.
Posted by Camera Trap Codger at 6:55 PM

Well, they're top of the diet in the San Joaquin valley, and they take a lot of kangaroo rats there, too.