What a difference a month can make during the growing season.

We bumbled about looking for the underground cams.

Alders in full leaf and knee-high grass covered the landmarks we expected, and we fell back on the GPS and Audrey's cognitive map to find the underground cameras.

But showtl didn't let us down.

Our rodent made almost daily appearances, which means the site was probably located near its nest. 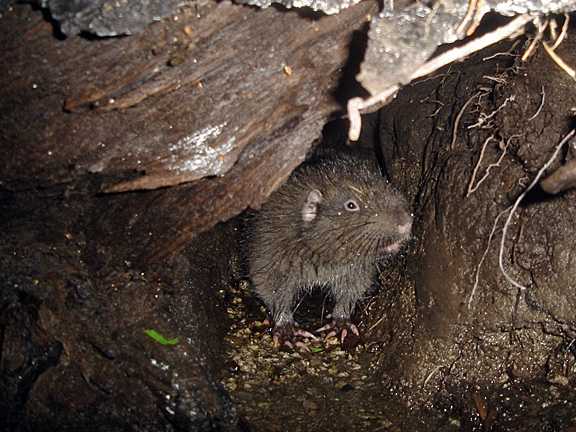 Only 21% of 281 exposures however contained animals. The rest were blank images. 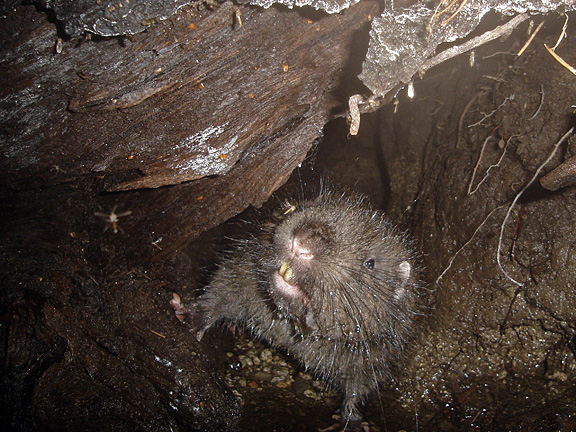 Normally we'd blame this on moving vegetation and phantom puffs of hot air which the infra-red sensor can't distinguish from animals, but this doesn't explain false exposures in the showtl's cool burrow. 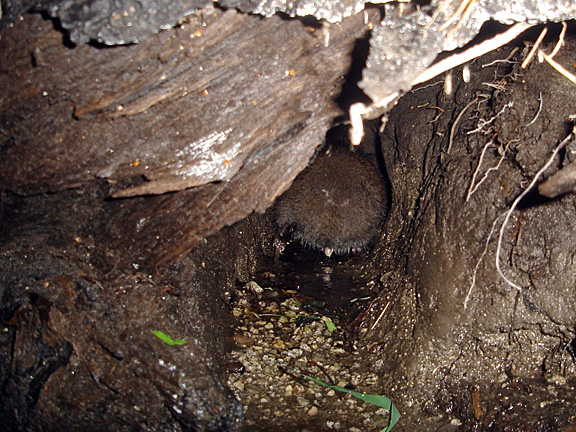 It is more likely the rodent was zipping back and forth, and the camera was often too slow to get pictures of it.

Despite false exposures, we still got 57 images of our quarry, and what you see here are the best.

What you don't see are the two predators lurking in the tunnel.

They're coming soon.
Posted by Camera Trap Codger at 7:56 PM

Amazing job Codge! This set is one of the coolest, most innovative sets I have ever seen. You set the bar high, but this clears it by a wide margin. Gives me ideas about trapping rodent tunnels that may be frequented by the cold-blooded, legless creatures who hunt them. Now we need the arboreal rodents whenever you are game to make a trip out to the coast.

I agree with Jake - stellar job Codge and crew. Not only did the cam and set allow you to get terrific pics, but the pics show the boomer in its true domain, and you can't get any better than that.

What's next - you going to try and get every species that's been documented to live in their burrows? :)

Btw - you may like this video - an aplodon was just found on the road near Mono Lake with a broken leg, and is being taken care of at the local animal rescue. Seeing the animal in hand gives an interesting perspective on its size and features...

Yes, the crew was pretty pleased with the results of their handiwork, and we'll definitely try to document life in the tunnel, though we'll miss the salamanders. Working on that now. Thanks guys, and you've got to admit, that Aplodon in the pet hospital was a darn good patient.

These shots blew me and Kimberley away Codge. Great photos and you and the crew definitely hit the jackpot!

Sweet shots Codg. Great job to you and Carl finding this burrow set in the first place.

It took some doing to figure out what this animal was! Your spelling of "aplodon" led me to a moss, and "showtl" only led me back to your blog -- but either "aplodont" or "showt'l" does the trick! Great pics of an interesting critter!

Beautiful. You should frame one of these portraits for the showtl to hang on his wall.

And thanks to RT for the video. So cool to see one of these guys moving around!

Another aspect of these shots I like - you get a sense of how the showtl uses its whiskers for feeling its way around its burrows.

WOW! This is amazing! Excelent job!

I've always wanted to try something like this and wasn't sure whether it would give worthwhile results, but this is great.

Now if only somebody could invent extra hours in a day, or even better extend weekends by a couple of days... Then I might just get time to try this on the mole rats we have over here...