Striped-Face in a Bluffing Mood 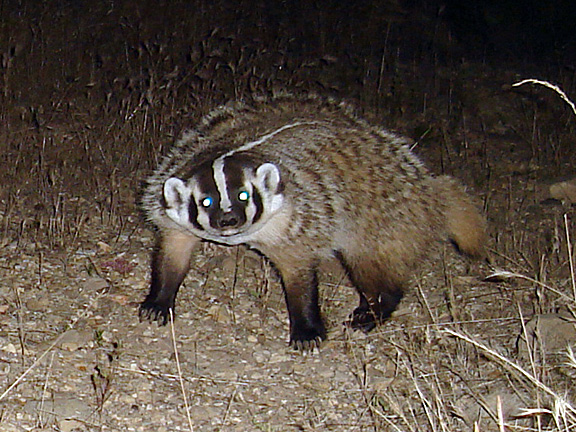 Is this badger's body language telling you anything?

If you think he looks like any other badger, kinda cute and snuggly, look at the next picture. 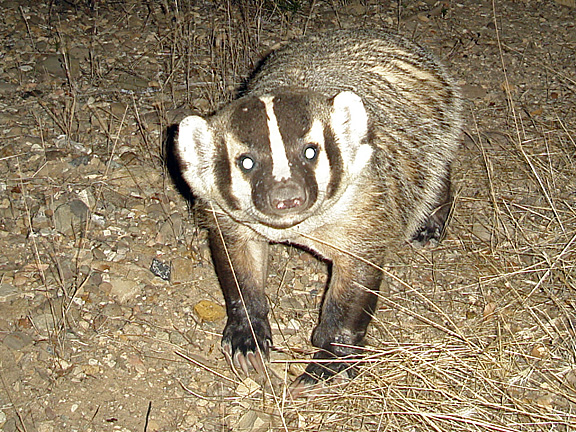 This is the usual appearance of Striped-face when he encounters a camera trap on the trail.

The animal is composed and attentive, and you might even say he looks curious.

That's how the working badger usually looks when snapped by a camera trap.

What about the badger in the first image -- the one stiffly braced on spread legs and looking as round as a cream puff?

If you still think he looks cute and snuggly I hope you never meet this fellow.

Note that his back is up, and he seems to have raised the hair on the far-side of his body.

That grizzled badger hair so famous for shaving brushes also outlines the creature's contour and shows off its bloated appearance rather nicely.

This is the "broadside display" of a bluffing badger. It's a defensive threat that shows off the animal's size to best advantage.

For badgers it's an unusual reaction to a camera trap.

Old Striped-face may be a tough customer, but he's a rambler who strays far from his burrows, and sometimes he stumbles into hungry predators larger than himself (not to mention the occasional scary camera trap).

That's when bluffing is a good defense.

Wemmer, C. and Wilson, D.E.  1983. Structure and function of hair crests and capes in African carnivora.  In Behavior and Ecology of Mammals, edited by J.F. Eisenberg and D. Kleiman, American Society of Mammalogists, Special Publication Number 7:239-264.
Posted by Camera Trap Codger at 8:57 PM

Two different animals, yes. And the facial markings differ too, but I am not sure about the stripe changing during threat. It's possible that more stripe is exposed when the hair is raised. They usually don;t allow you to part their hair however, so we'll have to check some study skins at the museum.

Or if you can't see the difference, you've got to ask yourself "Do I feel lucky?" Well...do ya? :) Great shots. I'd love to find one of those guys around here. No one seems sure if we have them or not.

Just looked in Grinnel to see what he had to say about the white stripe. Take a look. Seems that the white stripe is the most variable of features on the badger, but that the Mexican subspecies (T.t.berlandieri) tends to have a longer stripe going down the length of the body whereas T.t.neglecta has a strip that usually stops at the base of the neck but may extend a bit past the shoulder. Not sure if these are still recognized as sub-species, but Chimineas is somewhat close to the sub-species border (fig 131). Sad that the dot in Santa Cruz is no longer valid.