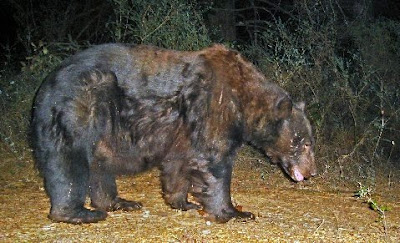 Rich just sent me the latest pics from the mountain, where the bulked-out individual seen above or one of his kin, dug a sizable hole in the woods searching for Emperor Norton's Treasure.

(To appreciate Emperor Norton it helps to be a San Franciscan or perhaps a Brit. The city was riddled with fox holes in the '50s when one of the newspapers sponsored a contest called . . . you got it! "Emperor Norton's treasure." )

This might have been Bruin's last aerobic exercise. He looks rather hangdog, obviously ready to retire for his winter's nap.

Other treasure seekers stopped to muse over his handiwork. 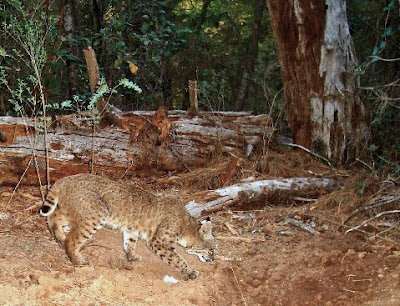 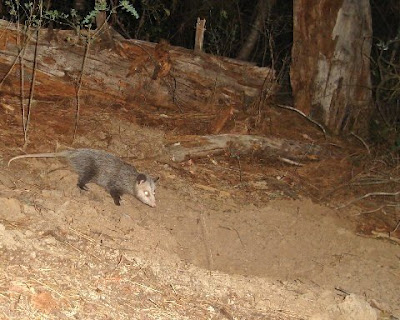 But the flicker couldn't care less about the bear's hole. 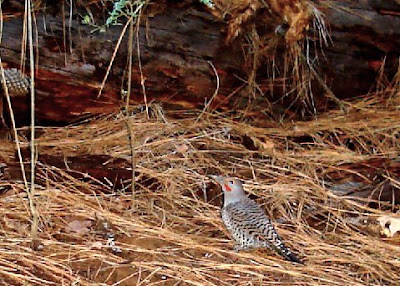 (Hey, remember the one about how to catch a polar bear? My daughters won't let me tell it to the g'kids. Unfortunately, by the time they're old enough to hear it, I'll be too damn old to remember it. )
Posted by Camera Trap Codger at 1:18 PM

Hey - I'm an SF Bay Area boy - don't be saying anything bad about the Emperor! :)

Any idea what the bears dig for? I see some pits like this around our property and haven't figured it out. They don't seem associated with burrows or ant hills or termite mounds...

Here's a great pic for you and cliff from some new trappers on flickr that shows 2 cougars that have no problem at all with camera traps. They give it the big ignore, and might even be sniffing out the human scent!

Thanks, RT. Getting cougar shots is as good at giving you a lift as a double espresso or a 5 mile jog.

The digging was at the site of an old salt lick.