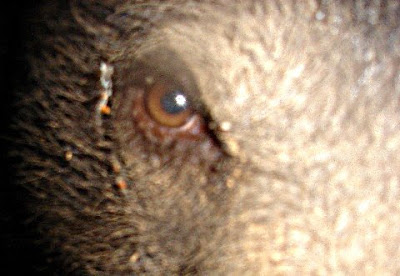 I ran this post by Cliff Wheeler, a seasoned woodsman and one of the best camera trappers around, and I am happy to say that he shares my views. If you haven't been checking his blog, well, you've been missing a lot of great wildlife images and tips on camera trapping.

So getting back to the lecture, here’s how we see it.

Point 1) Despite our best efforts to hide them, our cameras don't go unnoticed.
Point 2) The response to the flash differs among species, but not all individuals react in the same way. 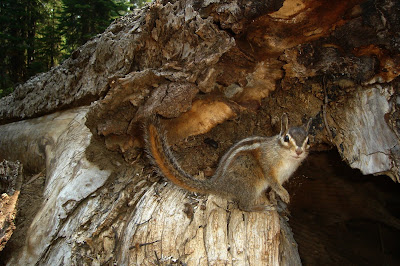 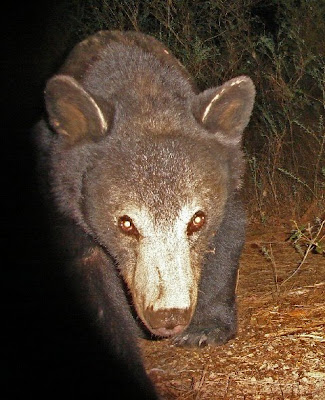 The evidence tells us that camera traps do not hurt wildlife or disrupt the lives of wild animals in any harmful way.
Posted by Camera Trap Codger at 5:15 AM

How do the commercial "Trail" camera's compare with your homebrew camera trap? I am considering another camera because I have the "disease" now and you gave it to me. lol

If you want to buy a commercial cam, I'd suggest one with a removable camera, as in Camtrakker,Pixcontroller, Trailwatcher, or Trailmaster.You can also pick up used home-brew units off the camera trap forums such as Real Deal Hunting Chat or Pixcontroller. Or we can make you another or two. Rich just bought kits from Whitetail Supply and is ready to jump in.

Great post. As a scientist, I wanna push back a little and am hoping you don't mind the discussion. How do you know that your use of white flash isn't causing animals to change behavior? Couldn't animals be seeing the flash and then avoiding the area thereafter? I.e., you talk about a white flash not being harmful to the animals (and I agree), but not whether or not it's harmful to the study. As I think I've mentioned in previous posts, this is especially important to me because I'm trying to study animal transits and behaviors within a fixed property. Anything that might shift them off the trails or property could corrupt the results (and I would surmise that animals living around humans are even more sensitive than those living in deeper wilderness such as the ones you typically study).

I'm currently using a Moultrie with an IR flash. The quality is so-so, but it definitely doesn't seem to bother even the most skittish coyotes. For example, here's a fun closeup of a coyote pooping on a rock!:

Downsides of the Moultrie... it's slow, pics aren't great quality, and b&w's are, well, b&w, and animals are colorful.

BTW - I noticed that you didn't mention bobcats and cougars. My findings are showing them to be the most shy and likely to change patterns. They seem very sensitive to poorly hidden cameras. I've gotten several shots where it's obvious they've seen or heard the camera and have turned off-trail to avoid it.

Thanks for your wisdom.

You're nicer than me. To those who complain...I'd simply say:

"I don't gots to show you no stinking badges!"


You do good work...don't let the whackos get ya down.

Sorry Codger but I couldn't bite my lip any longer.

Randomtruth, Your findings on bobcats and cougars is entirely wrong. They are not shy, do not change their behavior and are not concerned with a camera that is in plain site. My studies as a non-scientist proves this point. The only thing that will change their habits and location is the food supply.

The trick to getting good photos is to find their food supply at that particular time of the year, the trails they use and set the camera. This takes a lot of work and trial and error, there's no shortcut for good photographs.

Like Cliff, I haven't gotten the impression that the cats are more camera shy than other species. But they are less likely to be encountered than raccoons for example, because there are relatively fewer of them. I believe that if you locate their core area of activity, they will pass the cam more often than otherwise (for example on the fringe of their home range). A friend and I got a pile of photos of a bobcat last spring in San Mateo county -- on three out of four cams. There were also multiple shots per session, especially at the cam that we set at a pool that was frequented by birds. In the case of mountain lion I have gotten as many as 10 to 20 pictures at a time using scent. Other times I have gotten only one or two shots. And using bait you can get a lot more, as has been shown on some of the trail cam forums. In the end what someone needs to do is to design a field experiment using both IR and flash cams. If we could get enough interested camera trappers to cooperate we could do this with a decent sample size and independence of results.

PS -- Random Truth, those are some fine pictures of the coyote. I love action shots like that!

Great info guys. I'm not sure on the cats, which is why I asked. I've had an awful time getting pics of them even though I know they're there (scat, kills, etc.). Perhaps the several pics I've gotten of bobcats seemingly turning off-trail to avoid the camera are purely coincidental, and the issue is scarcity over sensitivity. Any other possibilities? Are they more sensitive to human scent - should I be cleaning the camera and area?

BTW - if I didn't make it obvious, I agree with y'all that the white flash and cameras don't harm the animals in any way. They experience numerous unknowns surprises daily and have to adapt to them - what's a camera flash compared to falling trees, lightning, fires, avalanches, ambush predators, or rattlesnakes? I would also expect that any shy animal will quickly acclimate to having a camera around and ignore it (w/ or w/o white flash). Animals are just good like that. Adapt or die.

For general animal surveying, I can't see this potential "acclimation gap" being an issue. But for more focused studies it could be. For example, the black bear that comes through our property seems to have a territory transit cycle of about 2 weeks. If I start using white flash, might she change her path? Permanently? Or maybe it would only cause a blip in her behavior that would average out of any long term transit study.

I could see the same question coming up for scientists trying to use the cams for animal counts or individual IDs too. But again, maybe it would be moot if the camera were left out for long enough. And/or lots of cameras were used. Codger's white v IR study would answer this pretty darn quickly.

Glad you liked the Wile E. Coyote pic Codger. I laughed hard when I saw it on the little lcd screen on the cam. And the kids in the family love it of course. We can't walk by that rock w/o chuckling.

Started using the camera to study if woodrats have any color preference for objects they take, but jays and finches keep taking the colored string! :)

Once again, thanks much for the wisdom gents.

RT -- on the wood rats -- just try aluminum foil for starters. They'll haul it to their stick nests even at considerable distances. (There's a paper somewhere in the Journal of Mammalogy about this as a way of measuring the size of their home range.) They'll stick the foil in the heap of sticks where you can see it, whereas they'll line their nests with the yarn (where you can't see it).

randomtruth - you are on the money with your comment about lightning.

Over some years of consulting to wildlife scientists and researchers, and supplying custom camera trap systems for their field research, I am constantly asked about the effects of white flash on animal behaviour.

Camera Trap Codger mentioned setting up an experiment using both infrared and white flash cameras - I took a slightly different approach. I have been using an infrared video unit with a wide field of view placed some distance away from the camera trap. The video camera unit triggers as the subject animal approaches the camera trap - and therefore records the actual instant the flash occurs, and the animal's reaction following. Consider it a fly-on-the-wall way of monitoring behaviour before, during, and immediately after the shot is taken.

I am happy to discuss further and provide some clips from my archive as examples...... By the way CTC if you happen to read this - you will know me better as seavisionburma - hope you are well!