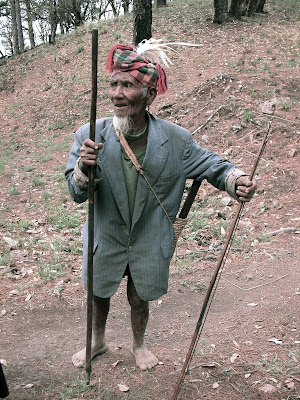 Location: the tail of the Himalayas (just a place you pass over while watching the inflight movie)

The trail straddled a ridge covered with pines and rhododendrons. In burned clearings were thickets of Himalayan blackberries and brackens. To the south a vast canyon, in the distance slash and burn.

A light-footed stranger came down the trail.

He was armed -- spear, long bow, a bamboo quiver of arrows, and a dah (machete). No shoes. He wore an oversized suit jacket.

There were no villages nearby.

His name was Boomenai, and he was 76 years old. He had two wives and ten children. Two are still living.

He was on his way to Kanpetlet, a two-day march from his village. He had slept in the forest, and roasted a bird for dinner last night.

I would like to know him better, but have to be satisfied with his picture.

Anyone who carries a spear, hunts with a bow, and sleeps in his suit jacket is my kind of guy. 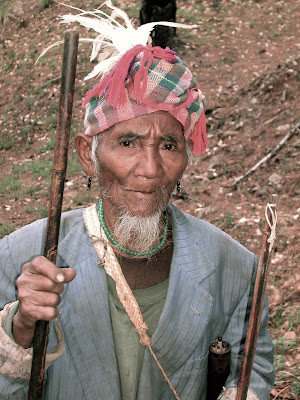 Posted by Camera Trap Codger at 8:35 AM

Dang Chris...you're so much more than a window gazer and we all benifit from that.

(and are stiff necks part of being a red-head?...I've got a bad one, too. I hope yours gets better)

Thanks a lot Beverly -- the link has done been added! And it must be a linked gene.

Glad to see people like that are still out there- I feel the same about the old Kazakhs,

You and I have the same taste in guys.

In the first picture the look on his face says "Who is this stranger, and why is he taking my picture?". What I want to know is, where are his pants?

He was wearing shorts. All the better to run in.

He is certainly well dressed he has a designer coat on.
Ted