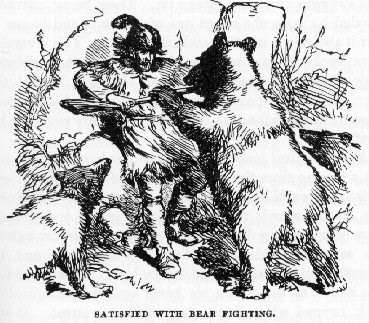 Three bears are sleeping in a den. Your camera trap is 10 feet from the entrance. How do you check it without waking them up? That's what Reverend Dick was wondering. I answered that bears sleep soundly.

But not as soundly as true hibernators like ground squirrels whose core body temperatures drop to a few degrees above freezing.

According to bear specialist Lynn Rogers, "black bears in the North hibernate so deeply that they may be jostled and prodded for several minutes in mid-winter before they awaken.”

This fact emboldened biologists to crawl into dens with sleeping bears in order to record their rectal temperatures. This is one of those punctuated achievements in field biology that begs the question, who tried it first, and was he sober?

Bears apparently don't roll over and look affectionately at the guy with the thermometer. Dr. Raymond Hock, a pioneering bear researcher in the 1950s observed, “When a hibernating bear is awakened, he tends to be cross as a bear.''

Hock however seduced slumbering black bears to cooperate with a bucket of maraschino cherries. When the sleeping bear smelled the cherries it briefly became wakeful and rose to its feet. Hock deftly inserted the probe and removed the cherries, and the bear went back to sleep.

This brings me to a mountain man and "grizz" story.

If bears didn't sleep soundly in the winter, I wonder if mountain man Joseph L. Meek would have lived to kill three denning grizzly bears in the 1830s. This is one of those mountain man stories that I suspect improved with re-telling. Writer Stanley Vestal did not annotate his references in his book about Joe Meek, as he did in other accounts of mountain men, so I can't go to the original sources.

Here's the story and my interpretation of it.

Meek found bear tracks in the snow leading into a cave in the Snake River country.

Meek, Claymore, and Hawkins entered the cave while a fourth mountain man, Doughty waited with loaded rifle at the entrance.

The cave "was about twenty feet square and high enough to stand up in." Sounds feasible.

"There the three men found three bears standing up to receive them." It seems unlikely the bears were standing, which would mean they were wakeful.

If so, they would have attacked the men. More likely the bears were sleeping or perhaps awakening in response to the disturbance, like dreamy bears smelling maraschino cherries. This is born out by the following statement.

"As soon as Meek was near enough, he whipped out his wiping stick and hit the big bear a smart blow over its sensitive nose."

There is no mention of the use of torches, and the description suggests it was not a particularly shallow cave. Unless the den was a rock fissure admitting some light, they must have used fire to see what they were doing.

"At once the big bear rushed out of the cave." . . . where it was shot by Doughty. The wounded bear "teared back into the cave growling and snarling" where the three men shot and killed it.

At this point Hawkins "started to sing and jump around and joined the others in striking the middle sized bear to make it run out".

Doughty despatched this one at the den opening.

"It did not take long to drive out the little bear", which was shot by three of the men.

Vestal refers to the bear as "he", but it was probably a female with cubs of the same litter, perhaps of differing size. It's less likely they were subadults of two different litters, separated in age by two or more years.

A great story, and one I would like to believe was based largely on fact.

Interesting story. I can see it all now...a wounded female griz charging back into the den where she has two cubs, then 3 black powder rifles let loose fire and smoke with enough noise to wake the dead. I really don't think you would have to hit one of the cubs on the nose to get it out of the den, more like trying to find some air to breath.

I have to admire anyone that would go into a bears den with a rectal thermometer. I know if it was me going in and I saw the bear, the temp on the thermometer would read 98.6 degrees on it when I got out and if anyone complained they could go back in try again after I buckeled up my pants.

Yes, you have to be a little crazy to be a field biologist, and bear biologists are a breed of their own.