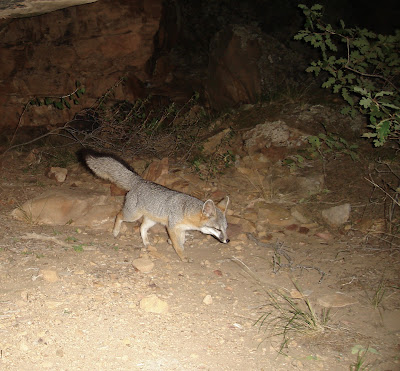 THIS is the place, I thought.

A sandstone arcade where ringtails, foxes, bears, and pumas stroll. And maybe an occasional hog-nosed skunk. Perhaps even a coyote now and then.

The kind of place where local wildlife might surprise an edible neighbor.

A long low recess at the foot of the rimrock, clear of rubble, protected from above, but only a few leaps from escape in the boulders and thickets below.

An intimate place and a camera trapper's haven.

I sprinkled a few drops of fermented fish oil on the rock, and it worked.

But not on bears or pumas. 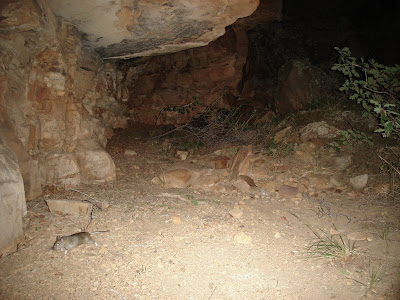 Providence rewarded me my usual allotment of wood rats and gray fox. Wherever I go they are waiting to give me their pictures. 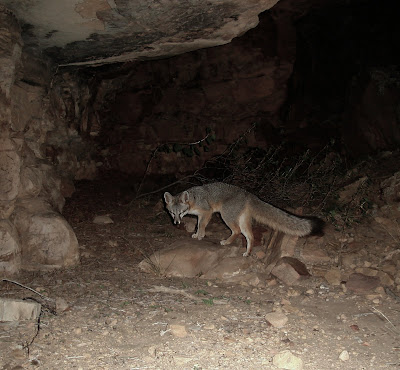 I'm not complaining, because sooner or later something unusal happens, like the monogamous pair in the same picture. 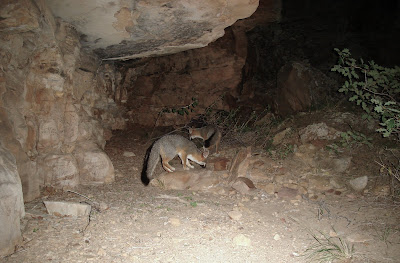 Or a meeting of fox and skunk, both drawn to that delightfully smelly smudge of fish oil.

Though the skunk is partially hidden, its flag is up, ready to about-face and lay the fox low with a blast of hideous gas. 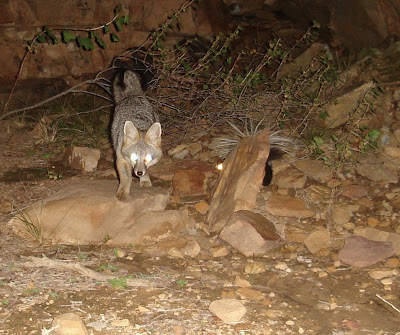 Br'er fox is not about to be skunked. His flag is also raised, but for the moment he's avoiding eye contact with the little bully. Or maybe his gaze is on the camera.

Either way, I suspect he's been skunked before.
Posted by Camera Trap Codger at 6:30 PM

You ole fox you sure don't get "skunked" very often with your results. Another great story caught for all of us to enjoy. Thanks again!

How cool is it to get a twofer. I came close to getting skunked myself recently (see http://naturejournals.blogspot.com/search?q=skunk)

Gotcha Jace, I read your posts regularly on Bloglines, but I'm not sure your counter catches the hit since I don't have to open the blog. Keep those journal entries coming.