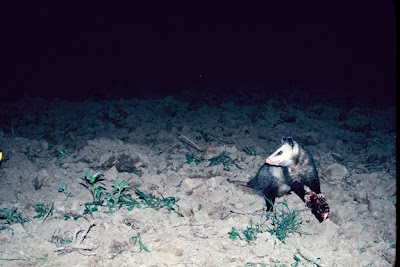 It was 1978 in Front Royal, Virginia, when this fine possum took the bait and its own picture.

At the time, we were experimenting with a camera trap to take to Indonesia.

The Nikon FE had a motor drive, and the external electronic shutter release on the front of the camera body could be wired to a trigger.

We tried two kinds of triggers.

A waterproof pressure pad had to be buried and covered with dirt.

It was sensitive only to animals heavy enough to press together the internal contacts. This excluded dickey birds and mammals smaller than rats. Another disadvantage is that cold and icy weather made the plastic stiff and less responsive to heavier animals. All the same, often I have wished I could rig a Sony s600 to a pressure pad.

The other trigger was the Sti 2090 photoelectric cell. It was powered by a 9v battery and worked in tandem with a reflector. It triggered the camera whenever the beam was broken. Its disadvantage was that it was totally indiscriminate as to what broke the beam. On a windy day in November you could get 36 slides of autumn leaves in an hour. And oh yes, the trigger could be deactivated if a deer or cow bumped the reflector or the photoelectric cell.

But I have also longed for a simple photoelectric alternative to the PIR sensor on controller boards used with current trail cameras.

So here's a toast to an earlier era of camera trap technology.

Wire barbecued ribs to a stake at the edge of an alfalfa field. Tastefully place photoelectric cell and reflector over the ribs, but outside the camera's view.

You can see the edge of the reflector in the upper left margin. The photoelectric cell is out of sight.

Below you can see the pork ribs wired to a stake.

One last thing. The flash on this setup was a power-hungry battery eater. 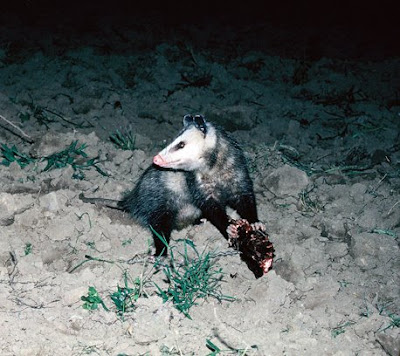 Hi
I'm enjoying your stories and posts, good work. I'm an amateur snow leopard conservationist and am keen to learn a bit about how camera trap photography really works as they are using it in a lot of snow leopard field work. Does one of your posts have a (laypersons) explanation?
regards, Sibylle, Melbourne, Australia