On the blog again 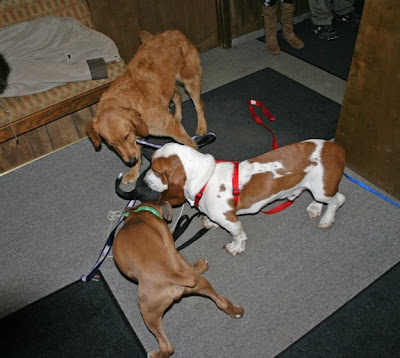 Fred beseiged (he's the little guy with the white-tipped tail)
I'm as happy as a pup. My computer is back, and I'm blogging again.

I was uploading scans from Costco -- 35 mm slides from several decades ago when the CD got stuck. It took a week to get it fixed, and I was having serious computer withdrawal symptoms.

But speaking of pups, Fred is growing (15 lbs this week) and has become a popular member of the extended family.

He is crate-trained and house-broken (though we don't take any chances), and he is not bad on the leash.

His trick repertory includes sit, speak, shake, lie down, roll over, and turn around. We're still working at come and stay.

We taught him with the clicker, and I see now that the energetically easiest ones (sit, speak and shake) are his best.
He worst habit is chewing the water tubes in the garden. He play bows and barks at the mousetrap deterrents, but they have definitely helped.
Harrassing the redhead as she sweeps is an irresistable misdemeanor.

A snuggle pup he is not. He is unable to deactivate his play-biting jaws, but our yelping, growling, and barking subdues it.

He goes to a dog socialization class once a week. He's the smallest and most playful dog there.

He gets a daily two-mile walk, and is good at tracking and finding animal sign, which was one of my main reasons for getting him.

He sniffs carnivore scat, but tries to eat horse puckies, deer pellets, and turkey turds. I don't encourage or reward the scat attraction, because parvovirus is rampant around here, and even with shots, he is still at the susceptible age (11 weeks).

We'll get into serious tracking and scat detection training later on, and you'll hear about that too.

It may not be pertinent.
On the front of the CD/DVD drive is a small hole. The expedient method of extracting a disc from a drive that won't open is to straighten a paper clip and gently push it into this small hole. A short way in, you encounter a slight (sometimes not so slight) resistance. Push gently, and the tray should open.

Fred seems to be coming along very well. Keep us apprised!

Fred sounds like a "Keeper" as well as a handful. No doubt he will soon become your "best" friend.