Return of the Motown beaver 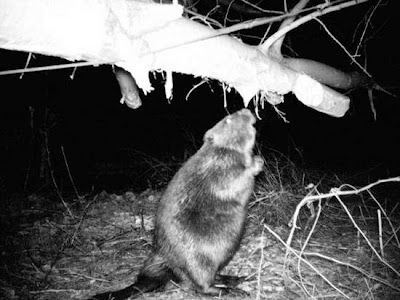 [Photo by Detroit Edison]
Hot off the press via The Outdoor Pressroom -- beavers are returning to the Detroit River after an absense of nearly a century. While Detroit has its problems, and this isn't going to fix it,  its still a happy wrinkle in the troubled city.

And the good news is that the beavers aren't covered with sores. In other words, the river's water isn't toxic.

And what's more, the Detroit riverbanks have requisite trees and woody vegetation that beavers eat and so cleverly craft into architectural wonders.

Check out the video of the Motown beaver at work here.
Posted by Camera Trap Codger at 12:01 PM

Chris, are you suggesting there ARE beavers covered with sores? I've heard of such things with regard to the innards of fish, and even sexual changes in frogs; not to mention what pollution is doing to other creatures (birds and insects)

I wonder just how long we'll keep our heads stuck in the sand and pretend we don't know why there are so many creatures sick or even disappearing. It's amazing people are told they can fish a river, but cautioned not to eat the fish.

That something like a beaver is injured by the river in which it lives is just criminal.

Thank you for bringing a more heartening story to us. It's good to know there is some good going on, too.

When I lived back in southern Ohio we used to hunt the farm fields surrounding a DuPont chemical plant that processed phenol. We eventually quit hunting the area because all of the cottontail rabbit we took would have large cankers, tumors, or other sores on them that made us afraid to consume the meat.