Passion on the beach 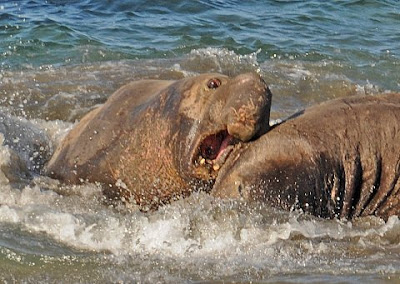 My camera trapping buddy, University of the Pacific Professor Rich Tenaza just sent me these pictures.

At this time of year he takes his marine mammals class to Piedras Blancas beach on the San Luis Obispo coast.

There the northern elephant seals are heavily into the annual rite of reproduction. This is a topic you expect students to be interested in.

In the category of free-wheeling fighting and fornication it puts to shame the spring break antics on any beach in Florida. 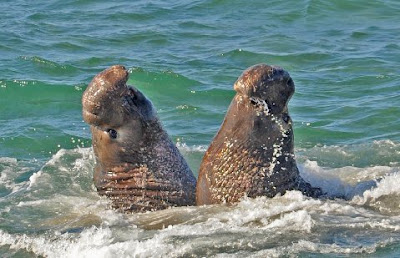 But Rich says the students just don't get off on field trips the way we did. Apparently, some view them as an inconvenience.

I suppose we were a minority even among the biology undergrads, but nowadays the minority is even smaller. 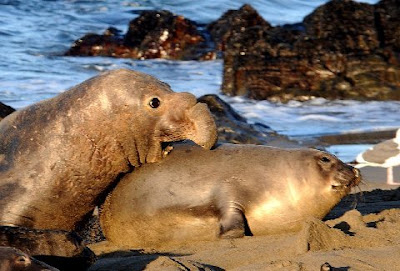 I remember my one and only trip to Ano Nuevo Island with Dr Robert T. Orr, and Dr Thomas C. Poulter.

What a privilege. I was a highly impressionable undergraduate, and it was simply thrilling.

It wasn't just the din and wonderment of battle-scarred pinnipeds.

It was the place -- the abandoned coast guard station with sea lions looking out the second story windows, the rugged California coast, the tides we battled to reach the doodoo-covered rocks. It was being there at the edge of the Pacific Ocean, the very same ocean that lapped Asia thousands of miles away . . . it was terribly stimulating. 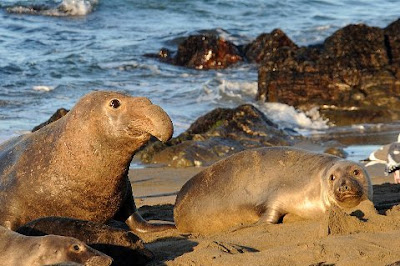 I guess that's why Rich found one student's comment so strange (and I paraphrase): "Why should we go on a field trip and pay money for a motel when we can see those animals on Animal Planet?"
Posted by Camera Trap Codger at 8:28 PM

I hope Rich's answer was "why the heck are you in this class wasting my time kid?"

I was just down at Piedras Blancas myself. Never saw a tv show anywhere near as good.

Why should you eat fresh veggies and steak when you can get all your nutrition through a bland protein/fiber mash?

Reminds me of a girl I dated who asked why I'd spend money on concert tickets when I could own the CD forever for the same cost.

I should have known then it wasn't going to work.

Unfortunately the majority of todays youth spend too much time watching television and are not exposed to the outdoors as much as we were as kids. It's a sad commentary when a college student has an opportunity to see first hand the beauty and dynamics of nature lead by an outstanding biologist to interpret the behavior,
but would rather watch it on TV.

Ah- but you can't SMELL them on Animal Planet...

Unebelievable. It'd be wonderful to see these magnificent animals in such a glorious setting, to smell the sea air and hear the sounds...In person. Thanks for posting the photos. I enjoy your blog very much.

...cringing about the typo... mea culpa. Tis my keyboard's fault, not mine!

just found yr blog, very thrilling to learn of the 'booomer' (mtn beaver, north american wombat)..you see, I created a club called wombats (women's mtn bike & tea society--acronym). Anyhow, now I WANT TO SEE ONE.
A pair of somethings jumpt into Bon Tempe one twilight this autumn, and sort of swam around waiting for me to jog on by..I thought: fishers? muskrats? but boomer is just as likelly, or not? Are they ONLY in Pt. Reyes?
Recently learnd of a pair of cats I'd never heard of : pallas and sand cats. So strange to be 53 and learning of new, if not perfectly common, mammals...
Jacquiephelan.com is my blog

That is a sad comment. How could they compare the fantastic experience of actually being in nature to watching it on TV! I'm just in my 20's but I find that comment really ignorant, it says a lot about the state of our society - arm-chair adventurers.

A couple of people were spot on with this. You never get the same experience until you are there. I camped ride outside a elephant seal colony and fell asleep to their own snores and snorts and what ana amazing thing it was.

I was a biology student not too long ago and wished there were more field trips. I had the chance to go to three and they are still my fondest memories of my undergrad time.

It is up to us to encourage more of the arm-chair people to experience nature. When doing this you will notice that they will find nature fascinating, they just need someone to show them.