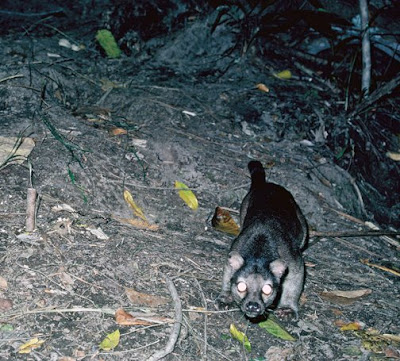 [Macrogalidia approaches the camera trap]
"Macro" eventually made an appearance, and was even curious about the camera, but we didn't have the satisfaction of knowing this until we were back in the states and had the film developed.
However, our spirits were buoyed whenever we checked the camera's film counter. Sometimes a 36-exposure roll was exposed in a couple days.
What we eventually learned was that most of those exposures were made by night flying moths and falling leaves. They had all passed through the 6-foot pencil-thick beam of light between the sensor and reflector.  (See this post for camera details.) 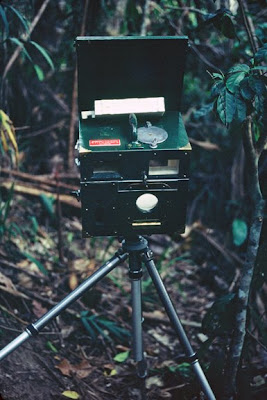 [the camera trap: Nikon FE and flash housed in a wooden case
and wired to an external photoelectric trigger.]
We baited the site with a live chicken, tethered above but just beyond the sensor's beam. 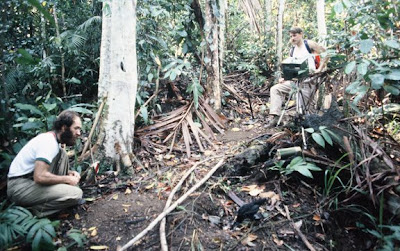 [Ken Lang and CW preparing the site, photo by Larry Collins]
We hauled 20 lbs of river sand and spread it on the trail so we could see tracks. The final incentive was a ripe banana hung on the tree in the background.
It was a time consuming process, and checking the cam required a 1000 ft climb from Watling's hut on the Mewe River to the game trail on the ridge. 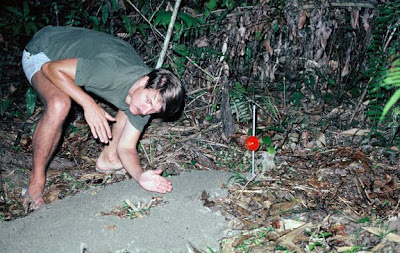 [CW testing the photoelectric beam alignment]
The civet came and fetched the banana. 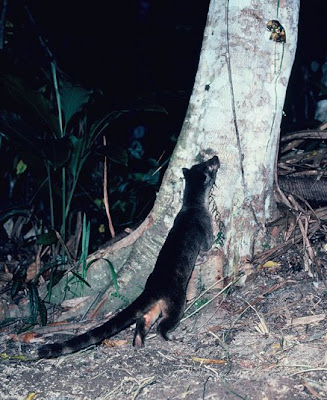 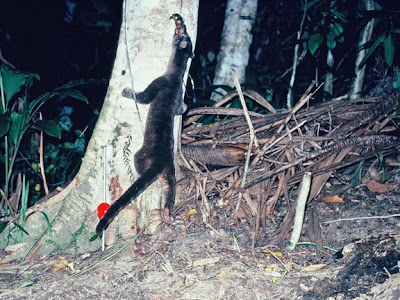 Then it killed and ate the chicken. 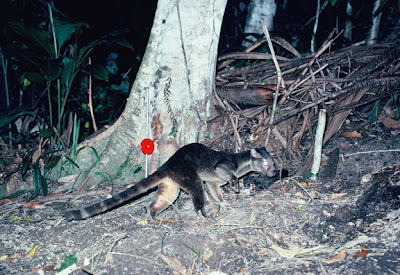 In 1999 or so, a film maker from New Zealand wrote to me and proposed a documentary on Macro.

It was a splendid offer to revisit Sulawesi and take part in the story, but I was overcommitted and very much involved in a project in Burma. I told him that Jack West, who lived nearby in Australia, spoke Bahasa Indonesia, and had been very much involved-- was his man.

Jack spent 5 months in the field, and it took 18 months to trap another Macro, but now it is a matter of record. Jack got excellent footage of the civet moving about in an enclosure, and it is all in the film.
Posted by Camera Trap Codger at 4:53 PM

I look forward to reading your blogs about your career experiences which are always fascinating and extremely interesting. Any biting insect problems?

Endless biting insect problems. I've fed so many mosquitos I've had all 5 types of dengue and am still alive (after a fashion).

Really amazing work with the Sulawesi civet- it eats both bananas and chickens, what an omnivorous diet!

I'm looking to set up some home-made camera traps in Wrangell-St. Elias Nat'l Park in Alaska, where I instruct a college environmental studies field course, and was hoping that you'd be willing to chat about what a good setup might be? I'd really appreciate any thoughts you might have on simple, relatively inexpensive equipment and trap design. Thanks!

Sophie, read through the blog, and search various species of mammals for information on trail cam sets. You can put cams on game trails, or other situations where there is sign of activity, like a beaver dam or a perch used by birds of prey. You can set them and wait, or you can use bait or scent lures, or a combination of bait and lures.

If you want to make the cams search for "trail camera controller" -- there are several available -- Yeti, Bigfoot, Snapshotsniper, and Whitetail, and they all have websites. Some of them sell kits which make construction pretty easy.

No matter how long you have been doing it, camera trapping is an ongoing learning experience, which makes it an excellent way for folks to learn about wildlife.

Such an amazing work,, but where could I watch the result? is there any link to see it? thanks