Evader of the snow dump 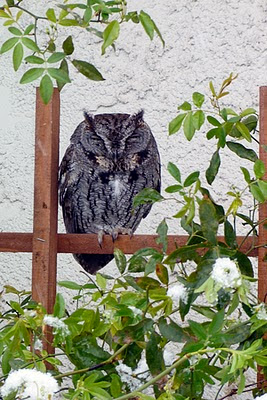 We had a snow dump last Thursday night.

We were greeted with 14 inches of snow on Friday morning, and it was still coming on strong.

That meant I couldn't get away with just making the fire and disappearing in the computer room the rest of the day.

When the redhead came in the house after an hour of shoveling I thought it prudent to inform her that I was just about to boot up and shake the snow off the trees.

"There's an owl in the Lady Banks' rose," she said, "so you probably don't want to bother it."

I  opened the back door and there it was peeping at me through squinted eyes.

The rest of the day it perched on the trellis under the eaves of the garage, but when the redhead checked at 5:00 it was gone.

It was back on Saturday morning, this time snoozing in the ash tree 15 feet from the house.

The owl had the wisdom not to sleep under snow-loaded limbs, but what does it all mean?

Why didn't it make use of the screech owl boxes near by? 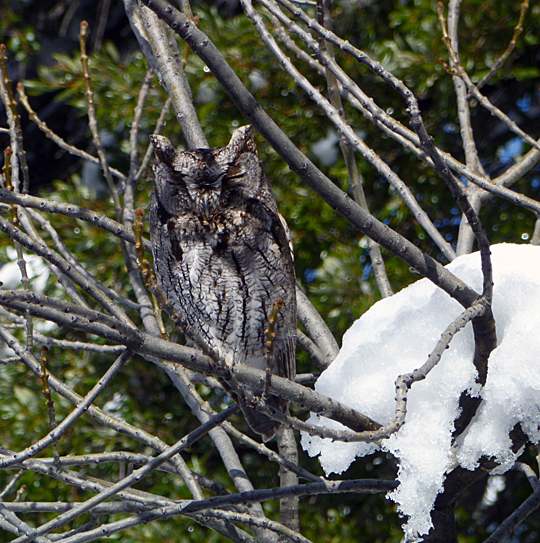 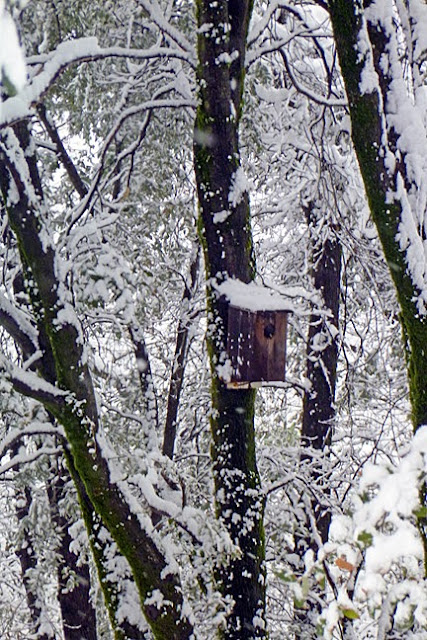 Posted by Camera Trap Codger at 10:34 AM

What a delight! I love your posts, Chris!
JoEllen

Wow. Incredible patterns on that gorgeous owl. What an exciting surprise for you 2. =)

How cool is that? I get excited when a wren sleeps under my porch, and here you are with owls, and Dave with cassowaries. Luckies!

The pattern on the owl's feathers looks so much like tree bark. Great camouflage.

What a neat sighting!

Talking about neat sightings, last weekend I had a star-nosed mole running around in front of us on a snowy trail. He popped down a hole shortly after. Wow!

Thanks guys, but a star-nosed mole experience means good luck and a wren is always a treat though disturbing when then are evicting nestlings from a bird box.

Chris
How fortunate to have a Screech Owl roosting near your home.
I hope you have a family of owls soon.