From school house to bamboo classroom


The training course commenced in the school house with my charming old friend UMA at the helm.

Opening ceremonies are normally a bit drawn out over there, perhaps a vestige of colonial protocol.

Typically, a charming lady, fetchingly attired in form-fitting longyi carries on at the podium with various formalities.

"I hereby declare that the blah-blah-blah training course is officially open".

Someone strikes the sacred GONGGGGG, and the smiling class applauds, knowing that the time has come for repast and refreshment.

But not this time.

UMA said a few words, introduced yours truly, the generator fired up, and Khaing Khaing Swe switched on the LCD projector for my canned lectures.

In their spanking new Friends of Wildlife T-shirts, the class sat on their diminutive stools, listened attentively and took notes.

Meanwhile the cooks plucked and butchered our lunch behind the building.


I rambled for a half hour about elephant survey methods, making the point that images of elephants provide more information than monthly counts of dung balls along transects in the forest.

UMA's translations I noticed were not only more animated then mine, but decidedly more prolix. 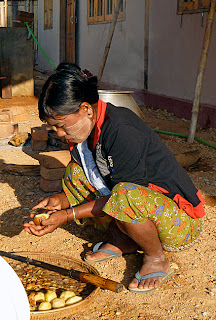 This means one of two things.

Your translator is either terribly enthusiastic or terribly imaginative.

In this case I knew it was the former.

The morning wore on and the smell of steamed rice and chicken curry wafted past the heads of children peeking through the door.

The class took their places on their diminutive stools.

After lunch another illustrated lecture -- this one about making camera trap sets, pre-visualizing pictures, anticipating animal movement, and so on.

They were still focussed, still taking notes in Burmese and English.

This enduring patience always amazes me.

Then we discussed camera protection against elephants.

I asked if they could make an elephant deterrent out of bamboo and punji sticks -- an indigenous version of my angle iron and nail camera protectors.

They could, but we decided to go with metal.


Finally we passed out the 6 camera traps and went through the menus until each of the teams had set the date and time, and standardized the other settings.

Then we adjourned to the bamboo hut up the hill.

Kids still have to go to school, so the hut was our Hdq for the rest of the 6 day course.

Two men hauled the generator up the road, but for some reason generator and location didn't agree.

We reverted to using the 3 laptops, a suitable arrangement.

That afternoon the class disappeared into the hills to set their first camera traps.

The course was off and running.

I need to take this class