The best bait to catch a bamboo rat is onion, garlic, or other aromatic roots from the forest.

The bait is tied or pierced by bamboo cord that has been worked over an edge and twisted to make it pliable.

The wire or string noose is smoothed against the inner circumference of the tube.
The bait cord is fastened with a knot through a hole under the bamboo tube, and the other end is tied around the splint that is attached to the rubber band on top.
The rubber band is lashed to a post -- a foot-long splint of bamboo tightly fitted into slots at the back of the tube. 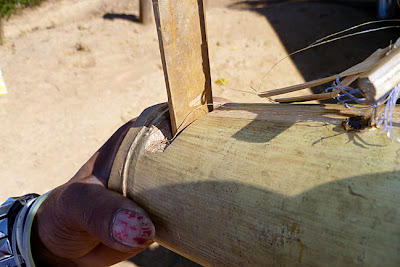 After setting the trap the trapper carries it to a crop field, enlarges an active burrow and inserts it. 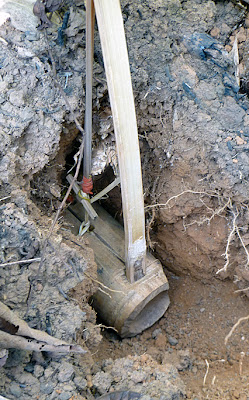 Then he covers it with dirt. 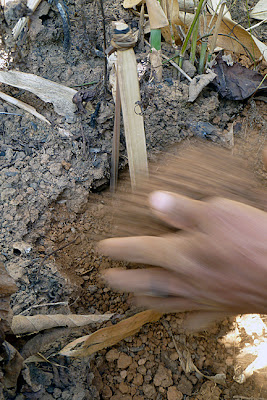 The bamboo rat always cuts the bait cord which releases tension on the rubber bands and snaps the noose tight around its neck.
Before the days of rubber bands, a flexible bamboo post was whittled down to serve as a spring pole.
A final observation: bamboo rats are valued as a cure for rheumatism, and in Myanmar the belief is widespread.
Of course the tuberous foods of the rats could contain anti-inflammatory compounds, but this is purely conjecture.
What is known however is that bamboo rats  (both Cannomys and Rhizomys) are natural hosts of Penicillium marneffei, which causes a debilitating fungal infection.
Nine to 95% of bamboo rats trapped by epidemiologists in China, Thailand, and India tested positive, and soil samples from their burrows sometimes test positive, too.
Five others species of rats however tested negative.
Penicilliosis causes fever, and is a secondary infection associated with HIV infections and other symptoms, but the natural reservoir is not well understood.
A case study from northern Thailand showed that bamboo rats were not reservoirs for human infection, but that people who worked with plants and animals had a higher risk of infection.
Penicilliosis is treatable with drugs, and the bamboo rat eaters I met look pretty healthy.
References
Gugnani, H. et al. 2004. Role of Cannomys badius as a natural animal host of Penicillium marneffei in India. J. of Clinical Microbiology 42(11):5070-5075
Posted by Camera Trap Codger at 10:22 AM

Great information Chris! That trap is pretty nifty. I think it would work for gophers for sure. Maybe we should make a human-sized version to guard our camera traps...

If you bait your trap with garlic, is the bamboo rat meat already pre-seasoned?

Ummm garlic seasoned rat with rice and of course some vino.

I ate it and it didn't taste like garlic to me. Would have preferred it curried, stewed thoroughly till the meat could be separated from the bones.

Yes, the human-sized version -- camera trappers revenge fantasy number 23-- is placed in a culvert with the camera trap as bait.

I'd love to see more bamboo rat traps! Email them to me at ottawafm@yahoo.com