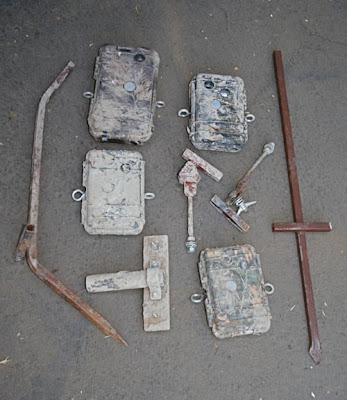 Greg McMillan kindly sent me the cams from San Luis Obispo county. They arrived as he had found them, covered with mud.

Greg wrote (a few weeks ago): "I brought back the cameras today. They have had a hard life. The Gillis Canyon camera and the Portuguese Canyon camera are totally muddied up although intact. The critters at the Fernandez Spring set seem to be a bit more civilized as there was no damage there."

"The camera we set up on my place was attacked. You drove a square tube post into the ground and there is a cross piece on the bottom 3rd. That post has a 45 degree bend at that crosspiece and another 22.5 degree bend about 8" from the top. It appears that something, probably a pissed off hog, hit it at high speed. Angered by the flash I assume. The camera box was opened and the camera was about 25 feet north of the scene of the accident and the box was 35. I will send the mount spike up for your perusal."

Look at the post on the right, good readers, and you will see how it is supposed to look.

Cam C was the casualty, and it looked like this when Greg put it back in the case. 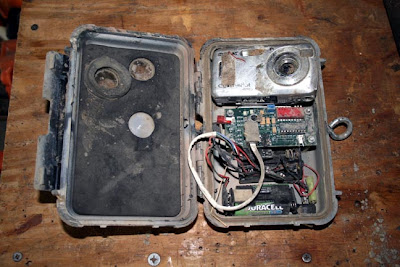 It's hard to imagine how a hog removed it from the case. Perhaps a ninja pig charged the cam in response to the flash, and then rooted it, stepped on it, and gnawed at the case until it opened. Maybe it carried off the camera in its mouth, or snouted it forward like a hockey puck.

Maybe hogs dislodged it while rubbing against the post. Maybe that's how they bent the post. Pigs or even raccoons, which are attracted to shiny objects, could have pushed the camera around.

Or maybe it was the work of a vandal?

I know I drove the pipe into solid ground, but the mystery is how it or they bent the upper section. A person would have to wedge it in order to bend it.

And how did the case open? It wouldn't be hard for a bear, but it would be quite a feat for a hoofed animal. Perhaps stepping on it was enough to snap the catches.

Okay, I'll cut to the chase. The pictures on the memory stick didn't identify the attacker, but that's valuable clue.

In the first 2 weeks the camera didn't take a single picture. On the third week it took 4 pictures. 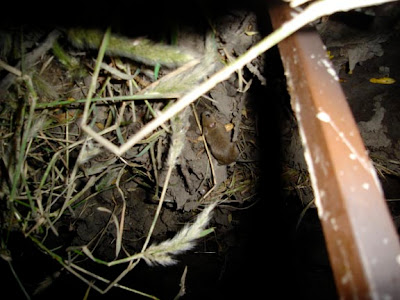 Something must have bumped the post, which redirected the camera to the ground where only a mouse could trigger a picture.

Because the camera was set for night time pictures we can only conclude that the attack took place in daylight and wasn't a response to the flash.

The attacker remains unidentified.
Posted by Camera Trap Codger at 8:15 AM

Wild. Any way it might have gotten caught in a mini stampede of scared hoofed animals that then stepped on the downed post and camera multiple times?

Saw an article you might like - researchers in Africa were able to use camera traps to get pics of Okapi in the wild. They were thought to be extinct.

Last - per your reco, I checked out the various baits & scents online. You are right, they have everything. That said, since I'm using the camera traps in a fixed 40 acres amongst homes, I think I wanna be careful about anything that might overtly change animal behavior (especially anything that might make the Cougar hang around the house more often). I did try some catnip in an effort to get better pics of gray foxes (saw in your work that they like it). Instead, I have a series of pictures of deer licking it off the ground long before the fox ever had a shot at it. D'oh! Guess I'll have to save it for spots where deer can't get. As you suggested, collecting random scat works, as does peeing on a spot yourself - both stop 'em for a quick smell.

You have any other simple scent ideas in that great bag o' tricks of yours wise Codger? Or do you think because of my unique circumstances, I should avoid them all together?

Sorry to hear of the downfall of Camera C. I have had problems with cattle and elk defacing camera stations on several occasions. We had cameras up on rebar posts and the cattle decided to scratch themselves on the post which yielded results similar to yours: a severely bent post. For camera sets in cattle/pig country, I would recommend a driving a T-post in deeply with a post pounder and mounting the camera on that. (However, we have had cattle bend T-posts too!). It is still a mystery as to how your camera case was open and the contents strewn about. Could have been trampled/rooted/gnawed. Any bite or hoof marks on the case?

Seems like a hog with a strong jaw could open the case if it bit it in the right spot.

Could have been a very dangerous species--hormone-crazed teenager

Thanks for the feedback, troops. Just back from New Mexico, where I found myself inadequately prepared to drive stakes into capstone. I left 3 cams there, but expect they'll be on the ground after a few bears pass by.

Sorry about the camera, but I know from experience that a good whack on the front of the case will pop open the latches. Have had several open like that from bears, especially on older cameras where the foam gets set around the camera lens for a while and doesn't give enough pressure to hold the latch tight.