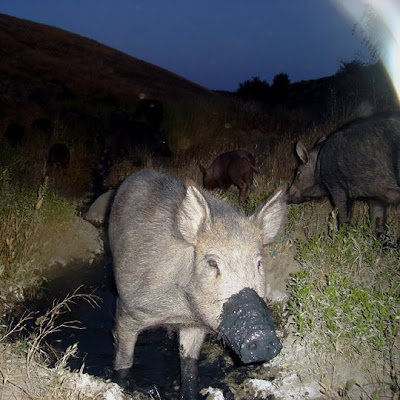 In case you don't remember, back in May I set 6 camera traps in "McMillan country". Greg and Irv McMillan and a good-hearted adjacent property owner allowed me to set 6 cameras on their ranches in San Luis Obispo County. I set them all at springs where cattle weren’t being pastured.

Greg and I had trouble aligning our schedules for camera pickup, so he kindly collected and sent me the cams in August. They contained 724 photos taken over 263 camera trap days (# cams x # days active). There were 515 animal images, and the success rate (# animal pics/total # pics) was 71%.

Of the 20 species of birds and mammals photographed, feral pigs were the most common subjects. They accounted for 23% to 94% of the photos at each spring. The porkers arrived in sounders with as many as 11 members. 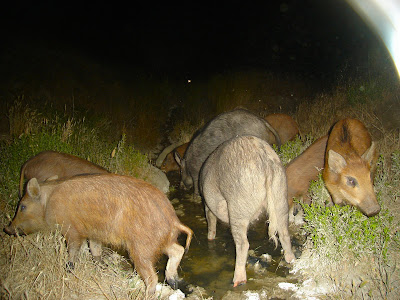 A particularly favored hangout was a spring in North Portuguese Canyon. Nights there were busy, and the rooting and wallowing habitues seemed to discourage other wildlife like snockered rowdies in a pub. A coyote and a bobcat appeared on nights when the pigs were away, or arrived before the pigs appeared. 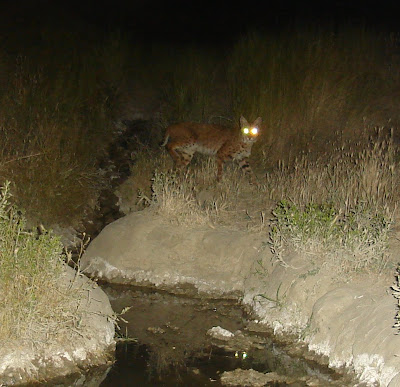 Spanish missionaries brought pigs to California in the late 1700s, and gave them free rein to wander and fatten on the land. More pigs came with settlers from the eastern US and from Russia. The traditional free-ranging form of management led to very independent hogs. They picked their own mates and interbred, which made for a nice genetic hodgepodge. Californians can boast red and pink pigs, white pigs, mottled and spotty pigs, and black ones too.

In 1925 a rancher from Monterey County introduced descendants of Eurasian wild boar from the eastern US. The free-wheeling mongrels and wild boars found each other and multiplied. The phenotypic expression of the "wild type" genes can be seen in black-haired ridge-backed boars and the wee stripers. 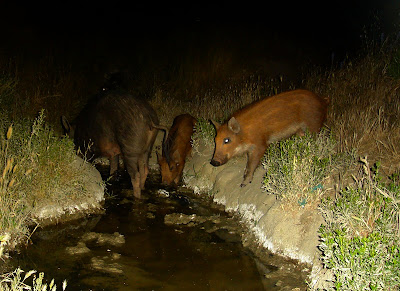 The pigs colonized new areas in the state, and between 1992 and 2004 added another 7000 square miles to their range. In 1956 the state’s Department of Fish & Game listed feral pigs as big game, but sport hunting hasn’t dampened the pigs’ expansion or hold on the land. They are more prolific than deer, and when deer are scarce they tide over the mountain lions.

But they not considered desirable aliens. They’re just as good at trashing landscapes as careless bikers and ATV riders. They are also disease vectors and crop raiders, and were named as one source of E coli that infected crops a few years ago. And when it comes to springs and creeks, they don’t mind going doodoo in the water supply. They are not as good as deer at thermoregulating physiologically, so they wallow in mud and water to shed heat.

Biologically though, pigs are cool animals. They're bold and intelligent. The porcine snout is a remarkable endowment, a union card to the elite clique of soil-tilling and root-grazing omnivores that includes the hog-nosed skunk, the hog-badger, and to a lesser extent, the European badger.

The porkers’ rototilling omnivory raises a question: do they partly fill the niche of our defunct state mammal, the grizzly bear, and if so, should we learn to live with them?

The answer is that we’ll have to learn to live with them. Like a lot of other problems, the biological solution is not that hard, it’s just that people and economics make it next to impossible. 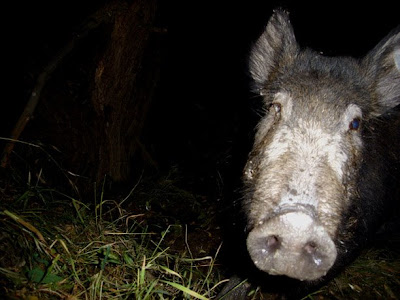 A defense of pigs as ecological equivalents of grizzly bears

Some history of California's feral pigs
Posted by Camera Trap Codger at 8:56 AM

All I know about 'em is that they taste REALLY GOOD!

Keep in mind that 50/50 mixture of fresh horseradish & apple sauce ...it's a great accoutrement (fun to say with one's little pinkie raised, while eating wild pig right off the barbeque)

Nice images, and good commentary. I was on the coast last week and saw pig road signs, but no porkers. I imagine they wander by at night.

When I lived in Sonoma County, many years ago, feral pigs would trash all sorts of moist hillsides in many of the state parks I used to wander through.

I have not seen signs of them in the southern Sierras, however.

Ha ha, this was a good one. I especially liked the first picture, the last sentence, and the one listing the assorted colors and patterns of piggies. :)

Great post. You captured some awesome pictures. I have to agree the first photo is my favorite.

We have a feral hog problem in Missouri. People released them on government and private land and then illegally charged people to hunt them. The Missouri Department of Conservation urges hunters and landowners to shoot hogs on site, any time of year, with out permit, unless it is deer season, then you must have a deer permit while hunting hogs. They have even radio collared hogs to locate herds to eradicate them; they are damaging some endangered species of plants that some other animals rely on.

Awesome web site, I had not come across this before during my queries! Proceed with the excellent job!

waaay off subject... but I noticed your comment about "Goodnight Mr Firefly". I used to have that book/toy when I was little... and my dad would read it too me... I would LOVE to know the name of the book/story... so I can find it somewhere.

All I remember is the ending
"Goodnight Mr Firefly" "Gooooodnight"

Do you know the name of the story?

I would also REALLY REALLY love to know the name of that book because I have been searching for it for years: "Good night Mr. Firefly!"

Gees, I wish I remembered. My wife says it might have been by a Scandinavian writer... "Carl something". But I'm just not sure. I agree -- it was quite amusing but at the same time relaxed the kids before bedtime. Sorry I can't be of more help.