Visitors of the great pool-Part 1 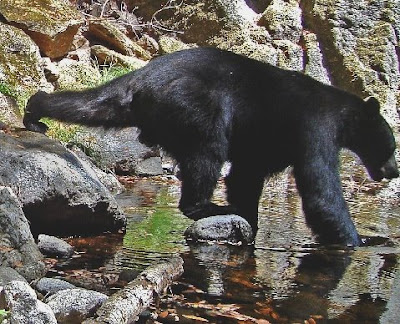 We're back on the mountain in Napa county where a couple weeks ago Rich set a cam at "the great pool".

The pool is a year-round source of water. Back in the spring we had a camera there, but it was set for night photos only, and yielded only a gray fox and dusk shot of a Steller's jay. We concluded that other sources of water, unknown to us, were supplying the animals' needs, and pulled the camera.

By August, the water supply to the old lodge had all but dried up. Rich surmised that the springs had also gone dry, so he set a cam at the big pool again. This time he set it for round-the-clock photography.

It paid off with photos of four species of birds, all new camera trapping records, and 3 mammals. (We'll talk birds tomorrow).

The Bruin above is the first black black bear we have seen here. Black bears (Ursus americanus) come in two basic color phases -- melanistic or black bears and brown bears. Bears of the brown color phase actually come in a variety of tones, from blondish to dark brown. There is also a curious record of a bicolored bear, brown above and black below. 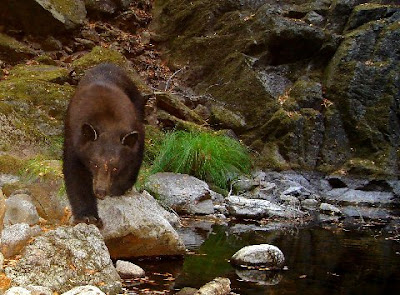 Adaptive coloration of mammals has been of interest to me for a long time, so allow me a brief digression. The relative abundance of black- and brown-colored bears differs between areas, as most North American readers probably know. There are east-west and north-south gradients in the relative frequencies of these two color phases.

The assumption is that both coat colors are adaptive, and each color gives its bearers advantages under given ecological conditions. In general, black black bears are found in more humid areas, while brown ones occur in drier habitats. The same holds true for melanism in a fairly large number of mammals. It could be a matter of protective coloration (an older interpretation) or it may be related to a number of linked physiological traits. At any rate, this is what geneticists call balancing polymorphism, and there are examples of it in many species of vertebrates and invertebrates. 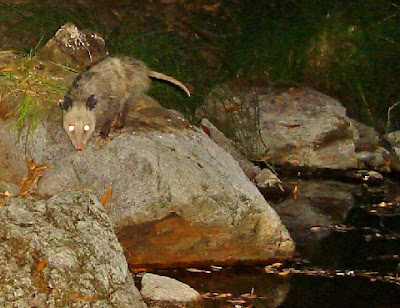 Oh yes, the other pool visitors were a squirrel and an opossum.

Tomorrow we'll look at some of the birds.
Posted by Camera Trap Codger at 5:09 PM

Interesting. We obtained some shots of a big cinammon colored black bear on one of our last forays into Oklahoma to check our traps there, but most of what we see there are the black to dark brown bears. I remember reading somewhere that at least some of the genetics in that Oklahoma/Arkansas/Texas area were reintroduced from captured Canadian bears. I would imagine the cinammon color would help more in those pine needle rich northern woods, but he seemed to be a fat, happy bear.

Yes, according to theory, the cinnamon colored bears should have a selective advantage under normal drier conditions, but black ones should get the "upper hand" when conditions become moist and "woodsier".