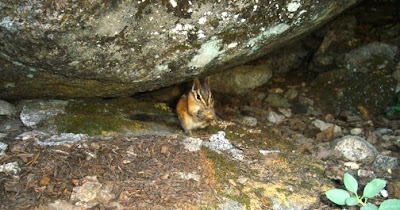 At the top of a large granite outcrop was a recess with a little pile of seed shells. That's where I set the camera.

Five weeks later there were 233 photos. The main visitor was a shadow chipmunk (68% of 84 photos). It paused there to eat fungi, gooseberries, and smaller seeds as early as 5:44 in the morning, and as late as 7:00PM. Its feeding station was well chosen, close to cover and protected from the eyes of predators.

Such a small patch of ground seems an unlikely path of travel, but there were other occasional passersby. Maybe the food scraps were the attraction.

A young golden-mantled ground squirrel made a few day visits, and a deer mouse made nocturnal visits. 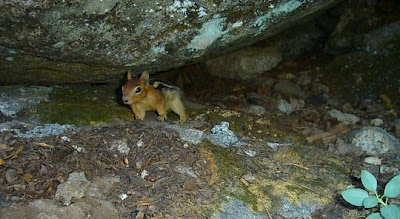 On two nights a Trowbridge shrew passed by. One night the camera caught it examining the seed pile. 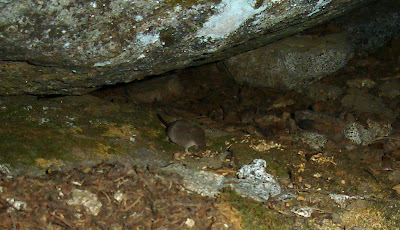 The place wasn't unknown to birds. A dark-eyed junco made two appearances. 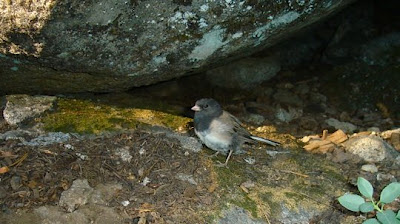 But a blue grouse. perhaps a young hen was my favorite visitor. She stayed for 2 minutes scratching about for scraps from the chipmunk's table.

It's surprising how many small creatures visit such a small plot of ground. Thanks to Craig Fiehler for bringing the seed pile to my attention at the end of the camera trapping workshop. It was too good to pass up.
Posted by Camera Trap Codger at 5:01 PM

How sweet! I am a big fan of chipmunks from early on. Nice to see all the other animals sharing the table.

I passed through that area about a month ago. It's nice to see it brought back to life with your photos.

That little seed pile was more productive than I thought it would be. I expected a few rodents but what a great shot of a Blue Grouse! The American Ornithologist's Union has recently recognized two groups of these birds. In other words, this species has been split into two separate species: the Sooty Grouse which ranges from the coast to the Cascade/Sierra mountain ranges and the Dusky Grouse which ranges eastward and interior to the Rocky Mountains. According to the Birds of North America species account the split was due to "differences in morphology, behavior, and genetics: color and texture of cervical apteria, number and shape of adult rectrices, male song (number and frequency of notes) and singing perch (ground vs. trees), and coloration of downy chicks".

Thanks, all. And the comments on grouse taxonomy are appreciated.