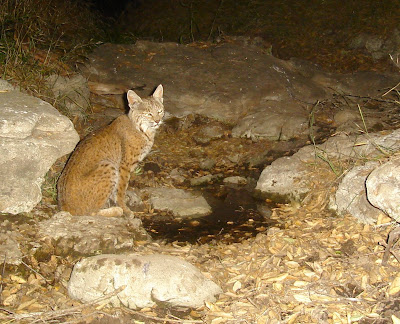 Fernandez Spring was a clear shallow pool in the shade of a spreading valley oak. It was the only spring where I could set the camera for 24 hr shooting while I was in San Luis Obispo County. The reason is that passive infra-red sensors are easily tricked by puffs of warm air, moving vegetation, and dappled sunlight. The resulting false triggers can rapidly fill a memory stick with an exhaustive record of passing shadows. I didn't have to worry about that here at this shady spring.

The spring was about 50 yards from the water trough mentioned in the previous post, but it was a far more popular stop for thirsty animals. Here the camera's batteries lasted for 24 days, and 231 of 310 photos were of animals (a success rate of 75%). I could identify 16 species, but 2 additional birds remain a mystery.

A bobcat visited the site twice and both times it lingered. On this visit I got 6 pictures of it looking rather bored. It stayed for 34 minutes, probably waiting for birds. 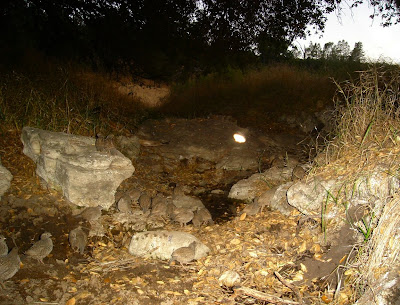 It was too late. A covey of 22 half grown valley quail (and a flash-lit moth) had passed through 40 minutes earlier. 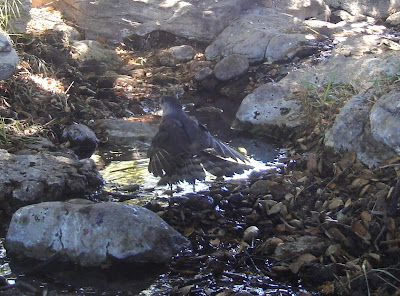 The spring was probably a productive hunting ground for the cat. Twelve species of birds visited to drink and bathe, including a Cooper's hawk. 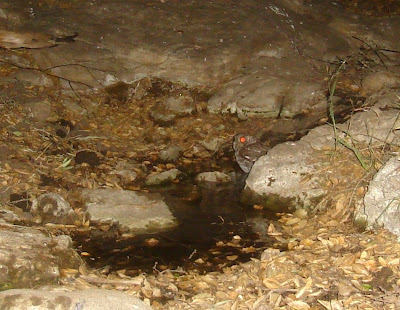 One night a screech owl flew in for a bath a half hour before midnight. The raccoon dabbled in the spring for a minute and half before going to the water trough.
Posted by Camera Trap Codger at 9:19 PM