A tin can romance 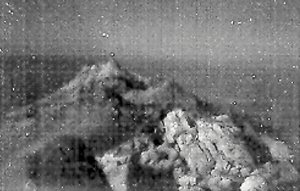 On a Student Section field trip around 1957 my adolescent friends and I climbed a rocky peak near Indian Wells Canyon in Kern County. It was a super cool experience. We could see for miles and miles, and we were feeling our oats. As proof of the feat I took a picture of my boot, another peak, and the wild blue yonder.

There was a small cairn on the peak where we found a note in a tin can. We could barely make out two “female names” penciled on a flattened Kodak film box, but there was an address in the town of Inyokern. Wow. They were trying to make contact on a mountain top. It was like finding a bottled message on a beach.

We were curious about these mountaineering “females”, but we were geeky and shy. We considered the “what ifs”. Then someone pointed out that since we had taken the note we had an obligation to write. We decided to go for it. If they weren’t too old, there was no telling where this could lead us.

I drafted a letter introducing the members of our group, and showed it to my climbing partners at the next Student Section meeting. We painted ourselves as adventuresome, somewhat athletic, and interesting young men. It definitely stretched the truth about our athleticism. Conveniently we also failed to divulge our ages, and of course we didn’t bother them with details about our favorite activities, like pressing plants, pinning insects, and making study skins of road killed rodents. Nothing scares off a romantic prospect faster than revealing too much too soon. (These intuitions served us well in future romances. Science nerds learned this at a young age.)

A few weeks later I received a reply and took it to the next Student Section meeting. The mountain climbers were high school girls and a year older than us. They wanted to know more about us and asked for our pictures. We felt this was going a little fast, so we ignored the request, but kept on writing.

Our pen pal kept telling us more about her girl friend’s problems, divorcing parents, smoking, wanting to drop out, dating older military guys. Clearly, she wanted to escape and grow up fast. Our pen pal was bearing witness with a kind of horrified fascination, but was powerless to help.

Her letters got longer and ours got shorter. Aside from the effects of pubescent testosterone surges, our lives were relatively simple. We were ready to bail out.

My friend Tony hadn’t climbed the mountain, but had a vicarious interest in what he called the "tin can romance". I told him that I had done my service as pen pal, and now it was his turn.

“What about it, man?” Tony reluctantly agreed to take over. I handed him the letters, but he was no one's fool. I believe he wrote once, but the tin can romance ended. Once again we were free men.

Au contraire, Neil Sadaka, breaking up wasn’t hard to do.
Posted by Camera Trap Codger at 6:00 AM

A great story. How true (in many ways).

I Google-Earthed Inyokern. Probably decent lizard fauna, but otherwise, yikes. Message in a bottle is certainly what that was.

Yes, it is good reptile country, but I suspect the cattle and ATV's have been hard on it since those days. Glad you enjoyed it, Hugh.