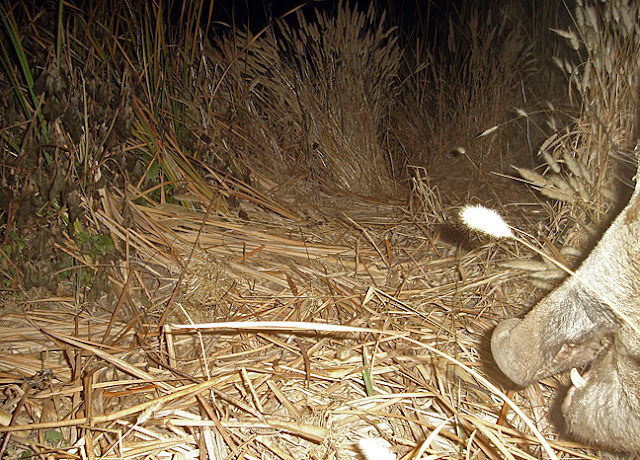 It was twenty-five days into Barny's nocturnal escapades when the she-pig came back.

She downed the camera trap with porcine recklessness, but paid it no further heed.

It lay on its back, three round eyes to blazing sun and starry night.

Our good fortune with Barney though wasn't yet over.

Two nights later --  at 9:41 to be exact, she appeared out of the darkness like a red-eyed Valkyrie, and the camera recorded her passing.

It was the only photo of her that night. If she touched down in the swale she kept her distance. 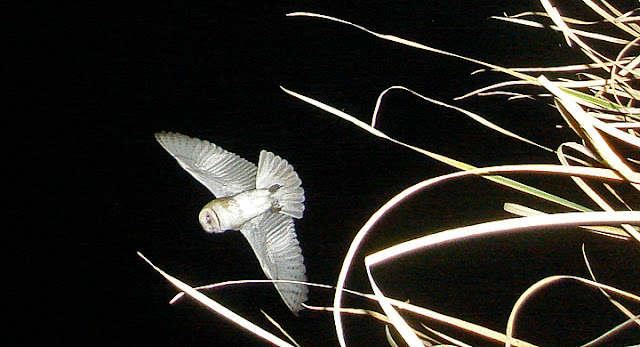 She made 8 more visits during the next 11 days, but we don't know if she played with the seed heads. 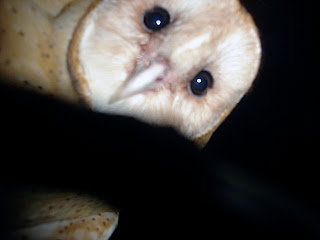 On each visit however she peered at the waylaid camera, sometimes looking down through her toes  . . . and sometimes leaning in from the side. 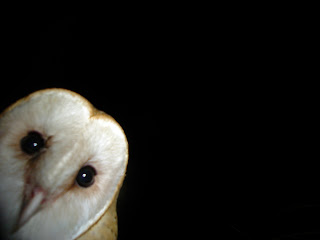 Then she disappeared into the night. 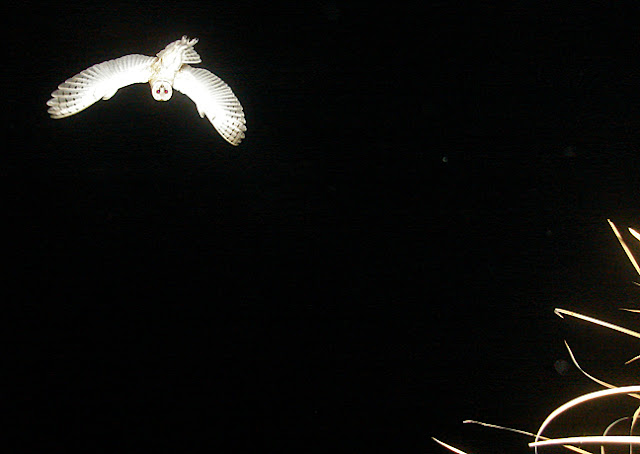 We'll be back at the grassy swale looking for Barny next year.
Posted by Camera Trap Codger at 5:12 AM

That owl is *so* neat - especially looking at the camera while flying - wow. -- Marilyn

Wow, those are amazing flight shots. You should let the pigs set your cameras up more often!

Nature has a way of turning a sow's ear into a silk purse. I'm glad your camera was there to capture this.

Seriously -- pointing the camera up for an owl shot is fantastic stuff. Amazing shots. I am wondering what I could do with a flying squirrel if I set it up right in the back yard on a dry night....

Now if we could just think out of the box like that on purpose...

That last shot is gold!

Dude- I can't believe how cool this is! Flight shots are amazing but I almost like the curious owl pics looking down into the upturned camera trap more!! Bravo.

Congratulations to the pigs!
I hope you thanked them.

wow. AWESOME. wow. I think I need to take a break to recover.

The lesson of the pig will not be forgotten. And Patrick, just try it and see what happens.

Codger,Codger.....just think of the praise you would have gotten from a story of aiming the camera toward the sky for the perfect photo of the owl, the glory and praise would have lasted for weeks .... but no, a pig, a big pig now gets all the credit.

I always believed in luck for some of my best photos, Congrats on one of the best owl photos from a trail camera.

I'll try and get in touch through one of the forums, haven't recieved any e-mail for this year, seems it's lost in cyber space.

You're right Cliff, I'm feeling a certain reverence for wild pigs these days.