The death of Big Sally 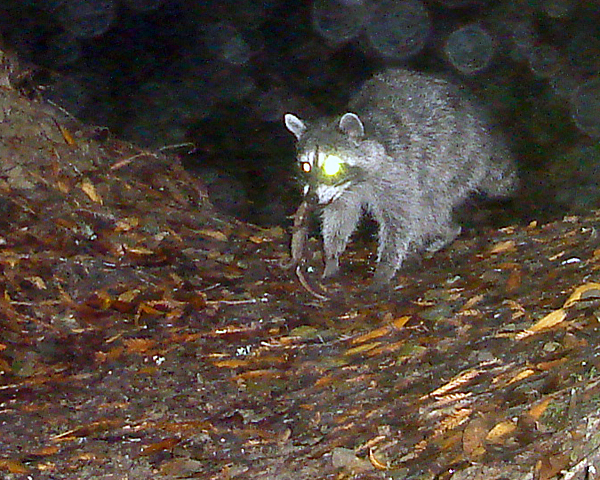 The doomed California giant salamander, Dicamptodon ensatus, was photographed in the jaws of a raccoon on October 18th, 11:48 PM.

The location on a trail in Marin County wasn't far from a steep year-round creek with prominent step pools.

Habitat: coastal mixed confer and deciduous forest. Lots of lichen and mossy trunks, and the bracing scent of bay laurel.


I regard any species of Dicamptodon with animistic reverence, not just for their size -- up to a foot, but for their bark, bite, and ruggedly handsome good looks. Not to mention their penchant for gobbling banana slugs, small snakes, shrews and mice.
Dicamptodon is an icon of our moist coastal forests and an indicator of watershed health.

The number and biomass of their stream-dwelling larvae often exceed that of salmon.
But you don't often see adult metamorphosed Dicamptodon unless you get your jollies removing old road culverts, wandering the woods on rainy nights, or dissecting the nests of Pomo tree mice.

Not that encountering Big Sally doesn't happen now and then in other ways. Finding terrestrail Dicamptodon is serendipity for some, and a quest-worthy adventure for others.

In the 1940s a well digger named Dan Coon flushed several of the seldom seen sallies out of springs in the Santa Cruz Mountains.

The discovery fueled the imagination of herpers young and old.

We viewed Dicamptodon as a deeply fossorial Orpheus that climbed out of the underworld only in darkness, and perhaps only on rainy nights.

Its nocturnal peregrinations could only be accounted for by a Swiss made circadian clock and a supernatural ability to sense meteorological changes deep in the earth.

Latter day Dicamptodon enthusiasts however found that its subterranean retreats included root channels and the burrows of fossorial rodents, usually about 3 feet deep.

This was a disappointing finding for old boy naturalists, but ecologist Gary Fellers and coworkers recently bolstered our somewhat diminished awe.

While bearing witness to back hoe and dozer the researchers discovered assemblages of 23 and 27 metamorphosed Dicamptodon under two of the culverts.

And that's not all.

Recent investigations of tree vole nests by Eric Forsman and James Swingle uncovered an old record of a large Dicamptodon cohabiting with a litter of Pomo tree mice -- 2.4 meters above ground.

Okay, back to the raccoon . . .  it probably discovered big sally on the trail after a recent shower.

If Sally bit, barked, thrashed, and released noxious compounds in self defense, the ploys didn't change the fatal course of events.

Those sensitive coon paws probably gave Sally a rude rubbing and rolling before the jaws clamped down.


[Nota Bene: For the sake of names dropping, I might add that Mr. E.S. Dethlefson, Mr Coon's friend who recognized the significance of the flushed salamanders and published the report, lived down the road from my grandparents house in Ben Lomond, California. Here's a bit about my early days there.]

Chris
I recall our Dicamptodon Days at Lake Lagunitas fondly.

Great behavior photo, sad story. Always hate to see the loss of a Dicampt. They're just too darn special.

Poor Sally. Next time I want to find one I'll bring a raccoon. Neat info, and thanks for the link!

That is a really interesting photo. It looks quite wet out; Dicamptodon move around in the forest on wet nights, and it looks like this one got picked off.

Amazing shot. And to think it was only 300 million years ago that they ruled the earth.
In my very limited experience, the Columbia Gorge dicamps have been bigger, but their California cousins are prettier.

You have an awesome blog. I am a new follower as a result of the mountain lion hoax photos. As a fellow holder of a wildlife biology degree, I am addicted to your research. What type of trail camera do you use to get your photos?

Thanks folks, and Nate, I am using home-brewed Sony s600s (now getting hard to find) with Snapshot Sniper and YetICam controllers. Have also bought a few Bushnell Trophy's but only for survey work.

I work for PG&E up in the Santa Cruz mountains and I came across one of these guys just waddling across a driveway, I nearly passed over it with my truck. I feel lucky to have had the privilege to see it now that I know how rare such an encounter really is.

Fixated -- glad to have shed some light on these sallies for you. A friend recently told me he found several under a board in Scott's Valley.