Barny's cakewalk in the swale

Though all but dry in early August, a lush swale marked its meandering course, and here and there the ground was even soggy.

It was a little oasis of greenery, but if any critter smelled water there it would have to dig for it.

I predicted that the swale would be a haven for meadow mice and their predators, thinking we might at last get a picture of our long-tailed weasel.

So we trampled down a couple square yards of grass and concealed the camera at the edge of the clearing -- set 388.

Six weeks later the team viewed the photos and found that the camera had taken over 750 photos of pigs, black-tailed deer, and cotton-tails, and not a single carnivore.

But barn owls were the big surprise.

There were 357 photos of them. 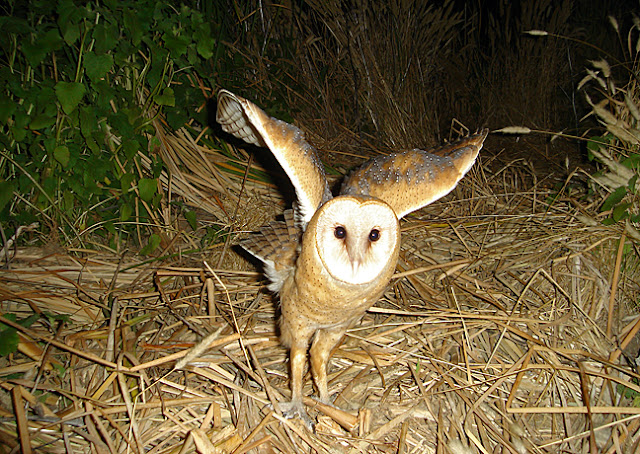 Barn owls all look the same to me, but I suspect it was one or two birds that visited 32 times on 26 nights, and almost always before midnight.

On only two successive nights however did a pair of owls show up in the same picture, and in three frames they curtsied. 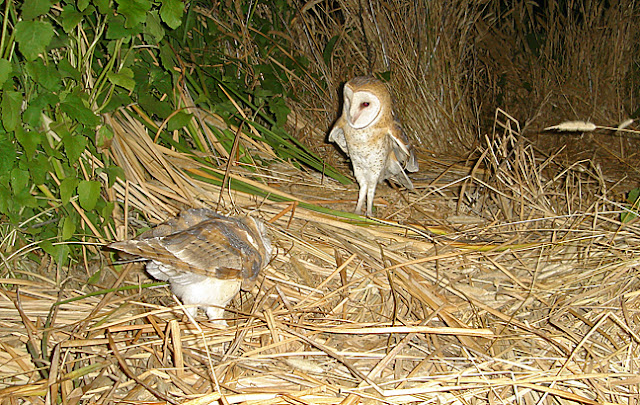 I need an experienced owler to tell me if this was courtship, threat, or begging for food. 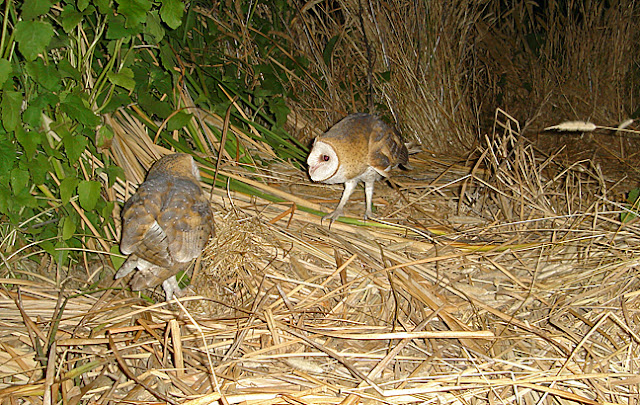 Or maybe the introduction to a cakewalk?

Who knows?
The bigger question though is what exactly were they doing there?
Posted by Camera Trap Codger at 9:02 PM

No expertise at all about Barn Owls, but August seems too early for courtship. Maybe they both heard the same mouse, er, mice?

In any case wow, as usual.

That is really cool!
Were the shots of the barn owls all on the same night?

Sweet shots. If I had to guess I would say that those were both males on the ground together...females have tawny underparts (as in the top photo), which you should be able to see on the flank of the bird with its back to us. Great stuff!

Oooh - good info Seagull Steve. So at least 3 individuals visited. Instead of courtship, maybe the female is a mom and the 2 males are juvenile sons? They kinda look like they're playing...

Most excellent!! 'Been waiting for the Barn Owl post and it didn't disappoint. Very inspiring for my upcoming Barn Owl camera trapping project- got my new IR trail cam yesterday (thanks for the advice) & had it out last night to test- normally wouldn't say this but hope the skunks visited last night!!

Great photos for a barn owl freak like me. Possibly these are siblings. We found with our live video cam in Nicasio, this past summer, that after fledging the siblings continued to associate with each other for some time. They also sometimes fed and groomed each other and clearly greeted each other. I love all your photos from this wonderful place. Maggie, http://www.hungryowl.org

Thanks a lot for the feedback and owl wisdom, but don't go away. There are still several hundred photos to go . . . (hnyuck, hnyuck).

And Deadmike -- the two shots of the pair of birds were taken on the same night. The other of the singleton on a different night.

Thanks! That is really interesting that they came to the same spot.

i cannot tell you how thrilled i am to view these photos. It seems as though a whole new genre of natural history is exploding into the personal lives of animals we mostly knew from a corpse in a museum special. I so want to start something like you are doing in my back yard where all sorts of things are at play in the night; also the 140 acres of farmland that i oversee as a farm manager. Just around the corner is the time; have to buy a camera first as i'm unwilling to get tied up in the cheaper hardware with so much pottery stuff on my plate.
thanks Chris for all the beautiful photos and captions.
THE DIPO'S AND BARN OWLS ARE STUNNING
ed

Outstanding photos of my very favorite bird of all time.
I agree with 2 males and a beautiful "golden" female. I have seen young fledgling Barn Owls in captivity interacting in a similar manner. I have also observed Barn Owls walking and hopping in pursuit of live mice in a flight cage.