Even camera trappers get the blues


A wishful image spurs us on -- Ringtail's lithe form scaling the moonlit rocks like spider woman in buff-colored tights.

She lures us hither and yon searching for the right habitat and a dried token of her presence -- a hope-sustaining turd.

But in truth we wouldn't know one if we found it.

We've searched the literature and poured over museum records for clues.

Damn it, we've looked in all the right places.

We camera trapped the same kinds of places near water. No ringtails.

The elusive quarry inevitably comes up during Chimineas rendezvous.

On some some dirt road to nowhere it's -- "Hey look at those cliffs over there -- looks like ringtail habitat".

It comes up during happy hour.


"I swear, they're all over the place in Butte and Plumas County." I saw a dead one on Rt 70 last week, and even the kid at my local hardware store knows their favorite bait."

"Whats that?' Craig rises to the bait.

"No wonder we're not having any luck."

The team collects the camera traps the week before Random Truth and I arrive.

They scope out the pictures in the field, which is one of camera trapping's simple pleasures.

Back at the lab they download the memory sticks and view the photos again on the computer to see if they missed anything.

When the photos are found wanting of ringtails Craig slides into a blue funk.

A few days layer we all meet and our 3-day camera trapping session begins.

These are generally convivial reunions, but we rarely have time time to set all the cams.

When we part ways Craig is jazzed to cast off with Todd and Heather to set the remaining ones.

After the last session he sent me this email.


"Lucky we didn't try to get to Hunt Spring when you were out here. It was a hell of a hike and the canyon with the spring was so steep and choked with brush, we couldn't get down to it. I might try to get down there in cooler weather.

As it was, we left the truck at about 2:30 in the afternoon and got back at close to 8:00 pm.  We hiked the last portion in darkness.  It was still very hot (mid-90's) this past week and we brought plenty of water.

However, it was still a strenuous hike and Todd ended up overheating and upchucking.  I felt bad for him but we sat in the shade until he felt better and we headed back to the truck.

We actually set the cam in a very interesting spot.  We found a large expanse of rock outcrops overlooking Gypsum Canyon and surrounded by chamise scrub.  It's similar to the spot where we got Spilogale last time.  I am encouraged because the canyon it overlook is more mesic that most of the stuff on Chimineas proper.  I could see sycamores growing in the canyon bottom.  It looked ideal for ringtails but the proof is in the pudding.  Let's wait and see what we get."

I have to admire those plucky guys. Nothing like cooky-tossing dedication.  And I should mention that Todd's the one who hauls the pack.

We checked Craig's set when we arrived at the ranch.

An impenetrable expanse of chamise blocked their access to Hunt Spring, so they set the cam on a beautiful outcrop.

I would have selected the same place.

But only two critters mugged for the camera -- right on that boulder in front of Craig. 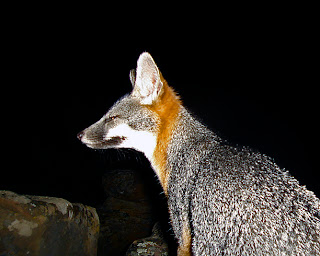 And ringtail wasn't one of them. 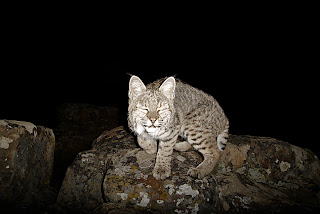 Posted by Camera Trap Codger at 9:52 AM

Your blog is wonderful! I look at it a lot, this is my first comment. I came across it when looking for photos of Calif. Quail: I want to make a sign for our "housing estate" fountain, to try and stop kids putting detergent in the water... a metal sign with quail & coyotes- explaining that they drink from the fountain- probably at night. Haven't done so yet, need HOA approval, etc.

Ah ringtails....finally saw my first ones this spring in southeast AZ. One in a campground in oak woodland and one that lived in my field house in the attic...best roommate ever.

Thank you Kwillow, and good luck with the fountain project. The coyotes probably won't drink there if the water smells like bubble bath, but the quail might since they can't smell.

I know that blues tune all to well. The only difference is that over here the lead vocalist is Vulpes chama (Cape Fox). Just like your Ringtail muse mine is a cruel vixen that haunt my dreams...

The romantics say that we should keep on trying, eventually she'll notice our devotion and succumb to it.

(Enjoyed the read and cool mug shots. Good luck and hope you find those Ringtails soon.)

Ah, if it were easy, it wouldn't be so much fun! I look forward to the very exciting day you get a ringtail, and I know it will be a great shot too!

Ringtails, don't have them here in Wisconsin. But for the numbers of ringtails we lack, we make up for with the numbers of raccoons we have. Strawberry Jam, interesting...do you know of any other baits one can use to attract critters?

Zach -- Google trapping lures and scents and you'll find a bunch of dealers.