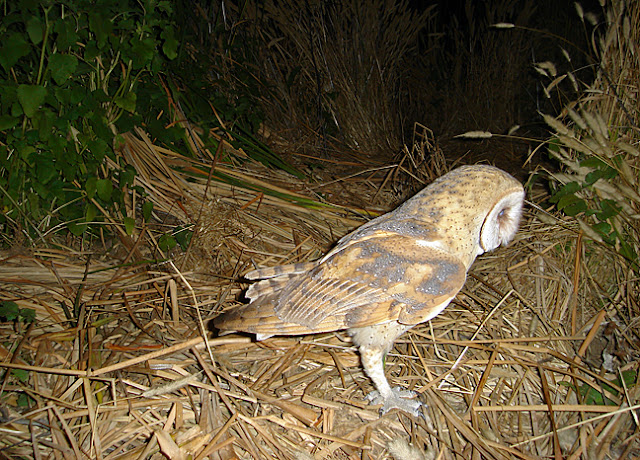 It seemed that Barny was a-huntin'.

Like a Peeping Tom she spent a lot of time peering -- peering into the trampled grass. 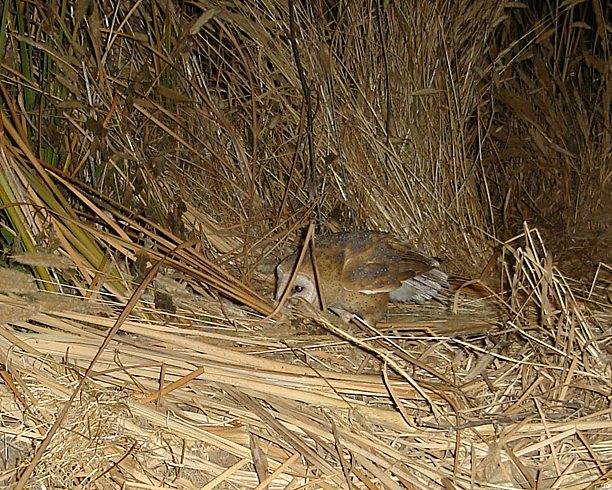 A wee sleekit beastie' was probably crepitating therein, and Barny, it seemed, was channeling the sound with her facial disk. 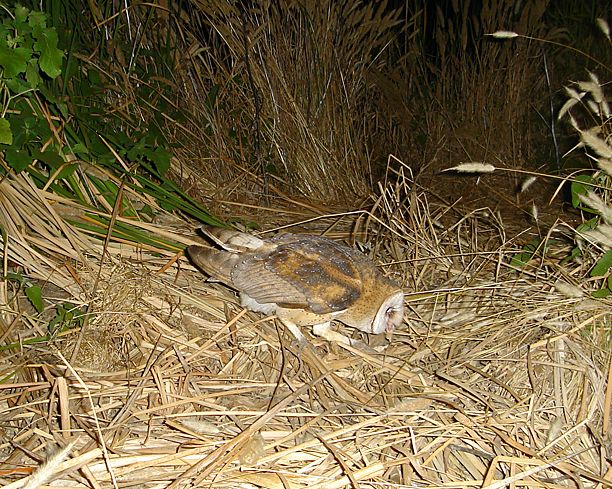 That's how I read the photos, but I needed confirmation.

Hans Peeter's Field Guide to Owls of California and the West made no mention of barn owls foraging on the ground . . . had we made a discovery?

I sent Peeters a message and he answered . . .


I myself had never heard of Barn Owls foraging on foot, although it wouldn't totally surprise me. This species, however, is so highly aurally inclined in its hunting that infantry-style foraging would be a surprise. Do you have videos? All owls, having pounced on prey and missed, do a certain amount of walking about and weaving their heads from side to side to obtain auditory clues, and all seem to be far-sighted and therefore back up from the point of impact and try to locate the prey by sight.

I quickly googled up a minor paper at http://www.fosbirds.org/FFN/PDFs/FFNv26n3p91-93McMillian.pdf which seems to present pretty good evidence of foot hunting by Great Horned Owls, and it mentions other references (though I couldn't locate any discussion of the phenomenon in Johnsgard, which the author mentions. I am also not entirely convinced that his owls actually ate the tern eggs; eggs of ducks and coots not infrequently turn up undamaged in GHO nests, having slipped out of the bodies of prey brought there. Such eggs are not eaten and become part of the nest detritus.

At any rate, if you can provide more detail or video of the foraging on foot that you have seen, I would very much like to see it.

Then came another message . . .

While ruminating about your pedestrian foragers, I remembered that I have seen Burrowing Owls hunt crickets on foot during the day; of course that species is highly visually oriented and more or less cathemeral, so that's no great surprise. The Eurasian Tawny Owl, however, is completely nocturnal but also forages for earthworms on foot sometimes (I've seen Red-shouldered Hawks do so in the daytime, rather surprisingly, since it's such insubstantial prey for such a large raptor).

The codger was highly gruntled with the finding, and began daydreaming about ways of getting the evidence in video.

The problem was time. The days were getting shorter and we hadn't even scheduled the next trip to Chimineas.

Meanwhile, Craig succumbed to curiosity -- he hauled his live traps to Barny's stomping ground, and though he caught deer mice and pocket mice in the neighborhood, harvest mice were the only mice in the swale.

Once again I poured over the photos searching for some hint of the elusive quarry . . . some telling crumb of evidence in the corner of Barny's beak, like the spurred femora of a Jerusalem cricket.

At last I found some frames of suspicious activity -- Oh my God! -- frames of Barny holding something fuzzy in her beak.

I dragged the jpeg into Photoshop and zoomed in.

The victim was no wee mousie -- but the seed head of annual rabbitsfoot grass, Polypogon monspieliensis. 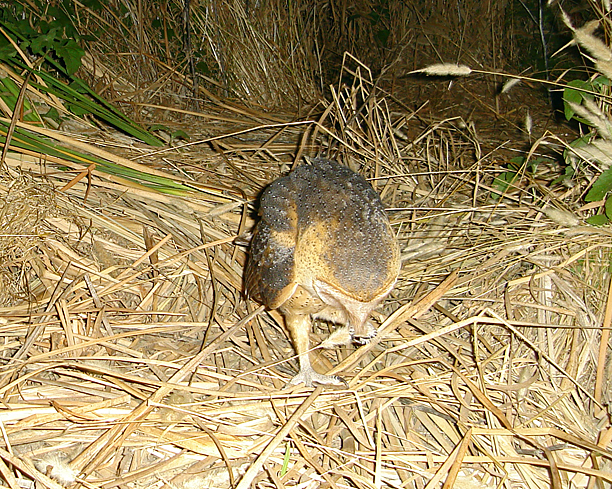 There was actually a sequence -- Now Barny was gripping a seed head in her talons.

Then she was either eating it or tearing it apart! Was Barny pouncing on imaginary mice in the form of grass seeds? 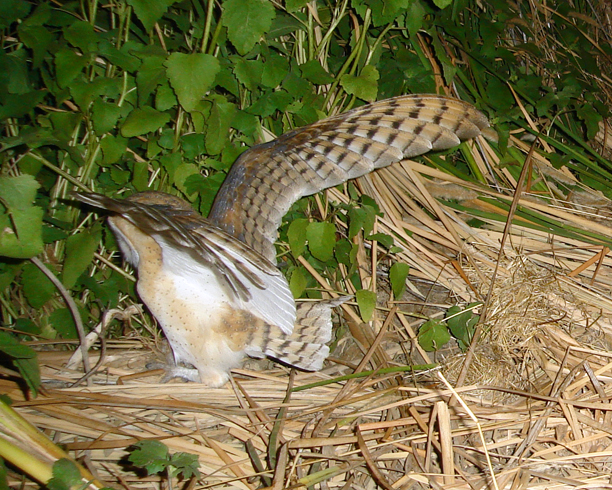 And sampling them for texture and digestabilty? 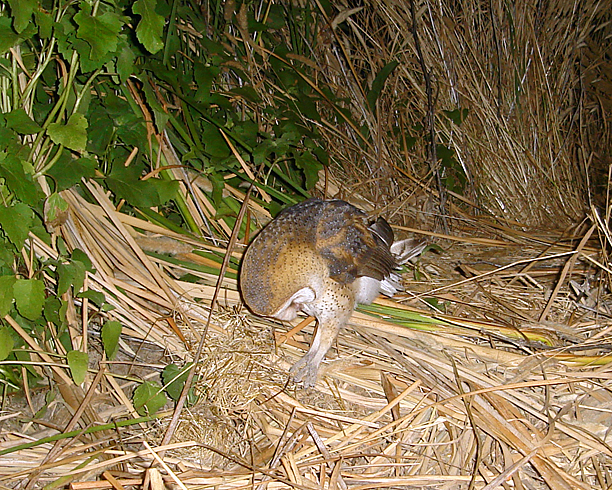 The swale seemed a strange and risky place for Barny to hone her hunting skills, if that is what she was doing.


A predator could explode out of the grass and catch the owl in the midst of her baffling game.


All good things do come to an end, don't they?
Posted by Camera Trap Codger at 4:43 PM

Just futzing around. I do a lot of that myself.

I've heard that Barn Owls may be attracted to light for some reason. Either because it attracts insects, makes rodents move more, or something else. This possibly is one of the reasons that Barn Owls die in vast numbers along roadways (combined with windshield height foraging) compared to other species(check out California Roadkill Observation System - similar in other states also). I wonder if the flash of the camera was having a similar effect to headlights passing along a road, and attracting Barney to that spot for the duration(without the hazard of the moving car right behind them).

These are wonderful pics, and on the back of them I've been researching the Cuddeback Capture camera, which is what I guess you're using, to photograph our own (tawny) owls here in England.
What worries me is the amount of negative comment on the functioning of these cameras, as well as on very poor support by the company. I'm wondering if you've had any problems with the camera not working as it should. How long have you had it?
What tempts me to take the risk is the quality of the nighttime colour pics you are getting. They really are quite stunning!
As to what you are finding with the barn owls, I'm not an expert on them at all, but maybe I can offer some comments.
Nothing in what you've photographed surprises me. Owls foraging on the ground -- no problem. I'm particularly interested to see the one chomping on a seed head. You might have a look at the videos of owls eating vegetable matter on my YouTube channel:
http://www.youtube.com/user/romillyh
where see "Tawny Owl eating oak leaves" and "Stripey . . . eating grapes and snow". Yes, that is THE famous Stripey. You don't see her actually eating the grapes, but Prof Terman tells me she did. Tawny Owls I have had have eaten all kinds of things (by choice), including strawberries, cabbage leaves, and nectarines. There are now quite a few reports of vegetable remains being found in Barn Owl pellets. I have seen a Tawny Owl pellet consisting entirely of chewed oak leaves.
As to socialising and playing, again little surprise there. No room here to go into the evidence I've heard and seen that (at least Tawny) owls do this a lot more than many people know about.
So your pics are a fascinating record of what some owls get up to at night that we simply don't see, and so isn't in the books. Your blog was picked up by a Google alert, and I was transfixed by the photos. Especially that one of the owl who is "bowing" to the other standing owl. That must be one of the very few pics of any wild owls "behaving" (I mean interacting like that!) that's ever been caught.
Please do continue with this series!

These owls could be just sharpening and honing their innate
predatory skills by grasping and pouncing on inanimate objects.
I have observed this behavior with young Barn owls in captivity.

These pictures are wonderful! Two things:

1. They most definitely eat Jerusalem Crickets and since those don't fly it must be part of the barn owls MO to do some ground foraging, dangerous as it may be.

2. Agree with Owlman's comment. We have cameras in some of our owl boxes and I've noticed that young barn owls are a lot like kittens - pouncing on anything that moves! I've seen them try to catch bits of fluff floating around in their box. The owlets are quite playful, even with each other. Also the females do much tearing up of the pellets inside the nest.

Thank you for these wonderful photos!

Thank you all for the feedback, and I greatly enjoyed Romillyh's You-Tube film.