The venue was the Sierra Nevada Field Campus, San Francisco State's hideaway among the red firs . . . . on the North branch of the Yuba River . . . where the skies are clear, and tumbling water and pine-scented air lulls you to sleep in the starry night.

We started on Sunday evening with introductions, goals, and a powerpoint presentation on the history of camera trapping.

The next morning I introduced the students to "set theory" -- otherwise known as staging wildlife photos.

I wanted the class to become familiar with the strengths and limitations of their own cameras as well as the home-brews I put at their disposal.

As you know, young folk are vulnerable to cravings, and wild places like this feed that understandable craving to camera trap big charismatic animals.

So I encouraged the class to target rodents whose squirrelly ways can be highly entertaining.

They are also more cooperative than mountain lions, bears and coyotes.
For a few sunflower seeds on a stump countless photo ops are the reward, and by varying the camera's height, distance and angle to the "stage" the greenhorn can appreciate the photographic effects and learn about optimal camera placement.

So we started by setting cams for chipmunks, golden-mantled ground squirrels, and chickarees near camp, and the class captured them all in pixels, as well as an acrobatic long-tailed meadow mouse.

We also devoted two mornings to collecting the cams I had set in June, and I am pleased to report that aplodon generously supplied self portraits which you'll see in the next post.
My annual fix of aplodon reassures me that some things in this state aren't going to hell in a handbag, and seeing the little buggers was a relief.

There were so few burrows back in June that I was sure the population had crashed.

We also added two new species to the list -- Nuttall's cottontail and a bobcat, not to mention a hermit thrush feeding its fledgling.

Post-prandial powerpoint presentations treated set theory, use of attractants ("To use or not to use"), animal psychology for camera trappers, and survey methods.

To keep the class jazzed about camera trapping possibilities, I showed the work of two fellow camera trappers from Minnesota.

Sean Hall provided images from the north woods, and Chuck Gackstetter covered the prairies of SW Minnesota. (Thanks a lot, guys.)

Sean by the way is the maestro who orchestrates Camtrapper.com.

It's a camera trapping forum full of useful hints, advice, and inspirational pictures of wildlife and sets, and is definitely worth bookmarking.

Thanks to the class for a great week, and to RandomTruth for enthusiastic assistance and splendid photo-documentation of the botanical wonders of the northern Sierra.

I'll talk about the outings and recces next time. 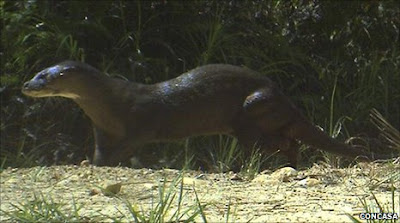 It has happened once again -- camera trappers have made an exciting discovery -- this time in East Malaysia.

There they photographed a seldom seen species of otter -- Lutra sumatrana -- the hairy nosed river otter.

Camera trappers may sing the blues now and then, but when this happens they belt out the Ode to Joy.

Read about it here and weep with joy.

Terima kasih banyak to Richard Lair for the heads-up.
Posted by Camera Trap Codger at 8:07 AM 1 comment: 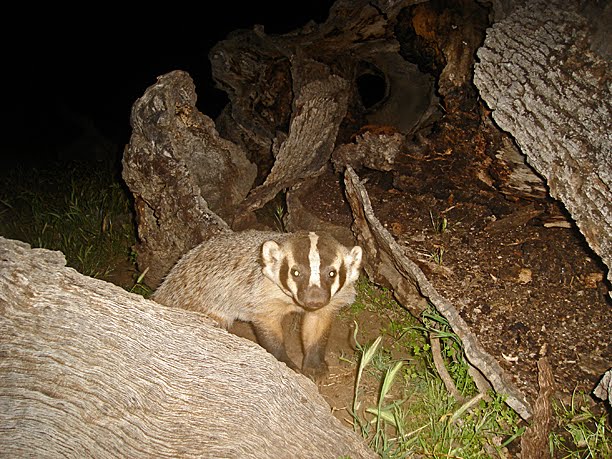 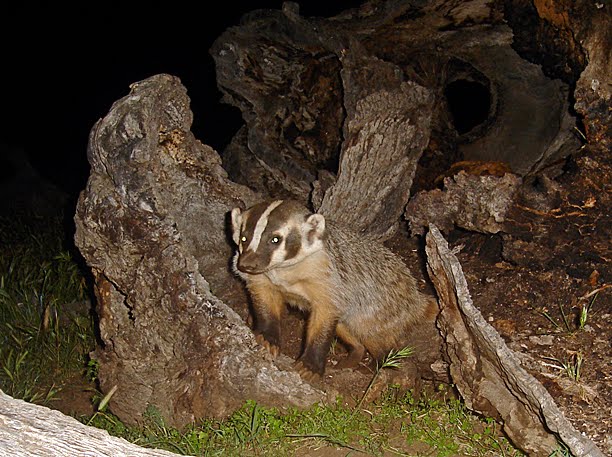 Quickly cased the scene, including the camera, 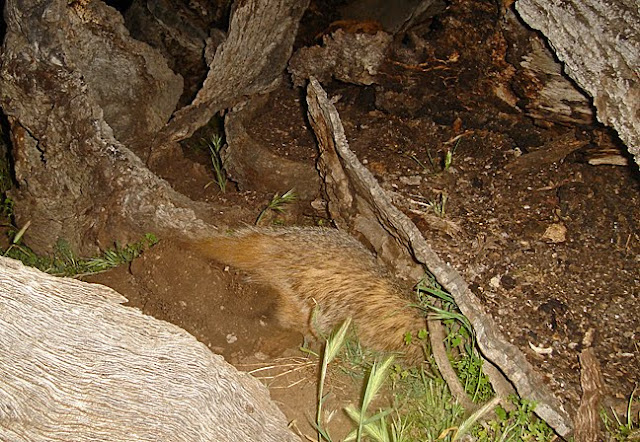 and then went to work. 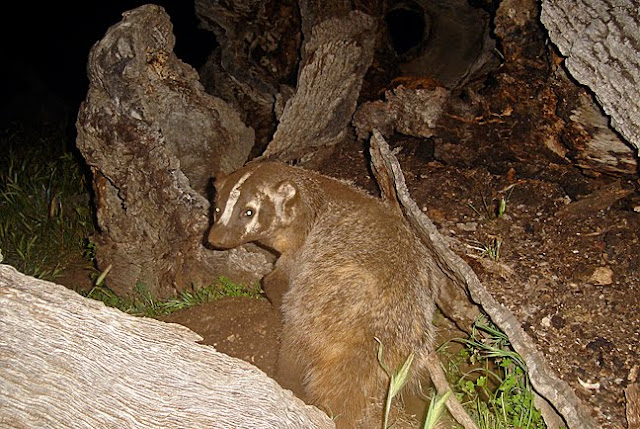 Finally he came up for air. 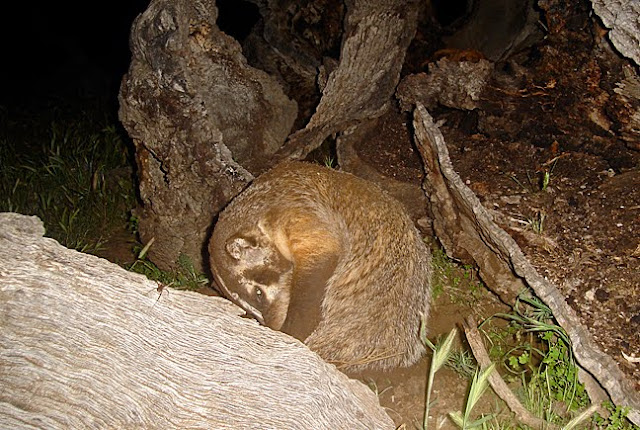 Apparently the job was done -- completed in 9 minutes.

He cleaned up and hit the trail.

Whether he carried off the festering can of cat food we do not know.

It was gone, just like the batteries that powered the camera that took these pictures.

Posted by Camera Trap Codger at 6:00 AM 6 comments: 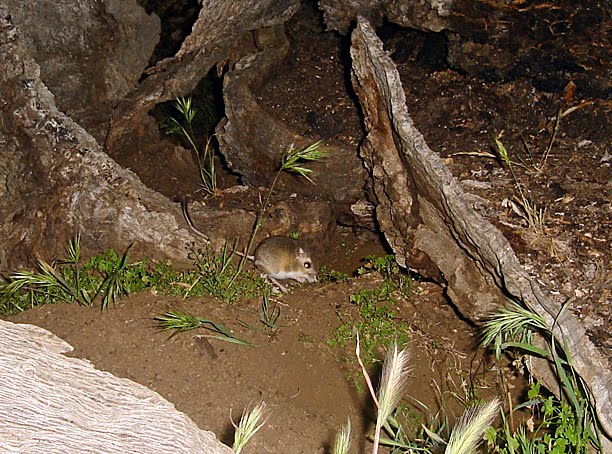 The camera at set 340 managed to take 100 images before the mysterious impostor filched the batteries 3 weeks into the venture.

But let's forget the impostor and talk about the others who visited our set.

A handsome Heermann's kangaroo rat was an active visitor. 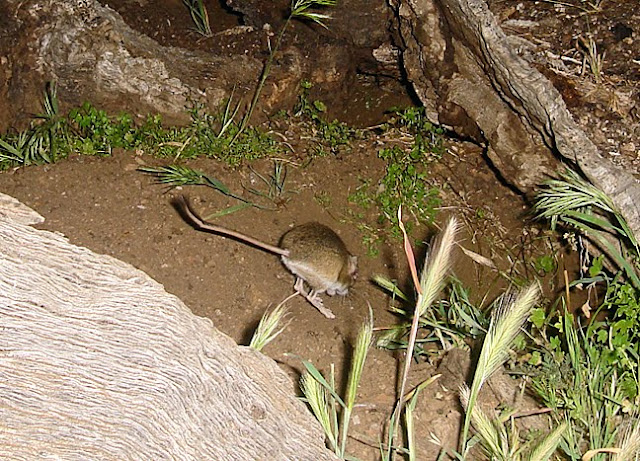 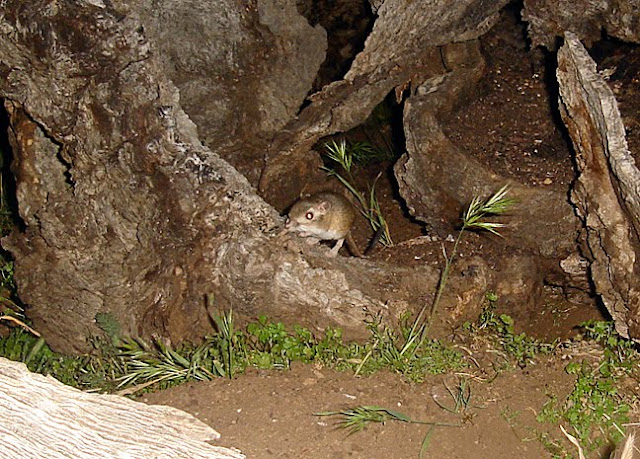 Of course there were deer mice, 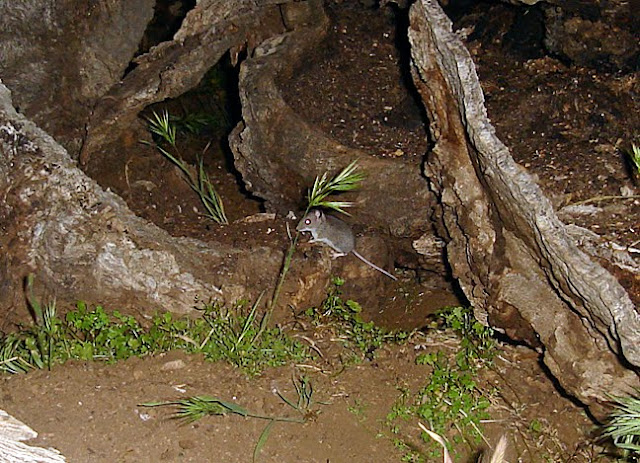 and a fit looking cottontail also explored the inner architecture, 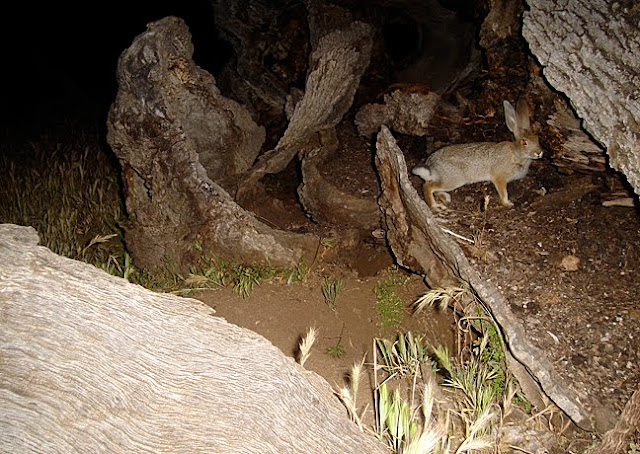 which just proves something we already knew -- fallen logs are attractive features to small mammals.

But in addition to the log's natural allure, some bumbling biologists had stuffed a perforated can of cat food down a ground squirrel burrow right behind that grass.

This might have attracted a bobcat with nicked ears, 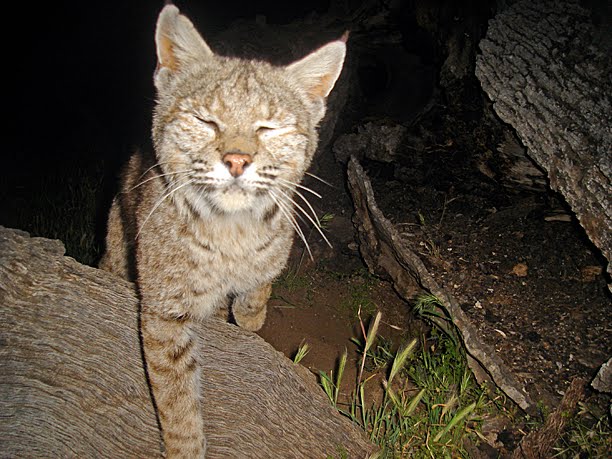 that waited patiently for that smelly can or a small mammal to appear. 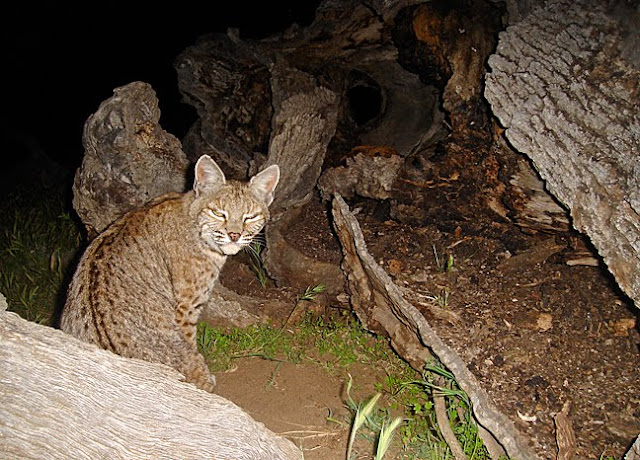 A few days later our old friend with the crumpled ear showed up with those jade cat eyes. 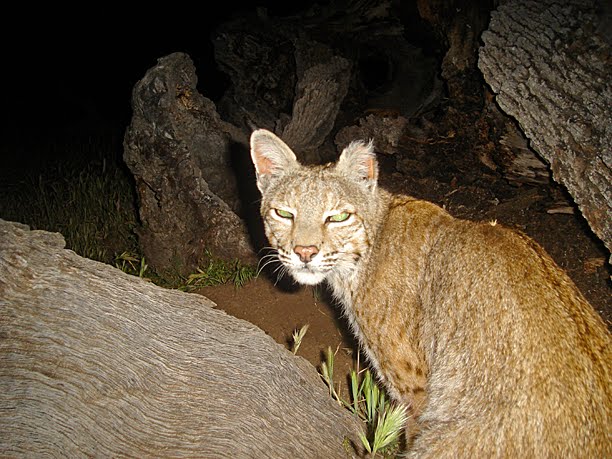 He's a poker-faced veteran of the range.
And we know he's an old rambler, because this is two miles from the hilltop where we clicked him last fall.
With a range that large the chances are good that this cat is a male.
Posted by Camera Trap Codger at 10:10 PM 3 comments:

The case of the missing batteries 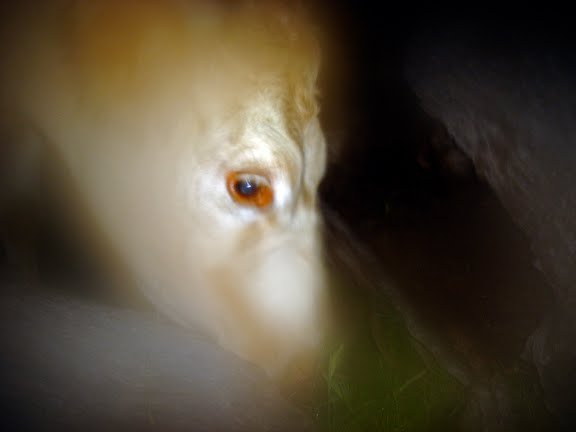 This could not possibly be the culprit.
Already it had been a long day -- 7 hours of driving for me and 5 or so for my friends.

But there was work to be done, so after a brief rest we struck out to gather the remaining cameras on the range.

Chimineas naturalist Craig had already collected and delivered all but 4 cameras to the lab, but being a responsible spouse he was eager to be present at his wife's baby shower, and couldn't lead us as he usually does.

So we headed NW under the warm sun of the solstice to the hollow oak where set 340 had been sitting for the past month.

And that's where I found the camera's batteries were dead.

Nothing new about that. There's nothing like a month of heavy flash use to drain batteries.

I opened the battery compartment to replace them, and found that they weren't dead -- the batteries were gone!

I know I'm getting old, but setting out a camera trap without batteries is not yet part of my repertoire.

You see, the compulsory "power-on walk test" would have informed me of my blunder when I set the camera.

This was indeed bizarre.

I put fresh batteries in the camera, and yes, the camera had taken pictures -- 100 pictures to be exact, a lot of cows, but no human.

For you oldtimers who remember the dawn of television this was starting to feel like an episode from "The Twilight Zone".

RandomTruth, who packs a physics degree and gobs Silicon Valley experience wasn't convinced that an impostor had meddled with the camera.

He had noticed that the external backup batteries were still in place and wasn't buying my explanation that they were useless in the absence of batteries or proxies in the camera itself.

So we left the matter hanging and drove on to set 349 in a beautiful bend of San Juan Creek. 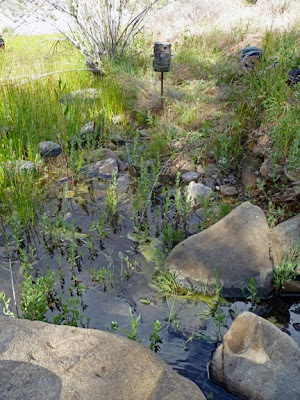 The creek bed was so choked with vegetation that it didn't look like it did a month ago. We searched for the site, and RandomTruth punched the lat and long from my notebook into his GPS.

We parted the grass like hungry body lice and searched on hands and knees, and then thoroughly demoralized we gave it up for stolen.

Someone had ripped us off, probably the very same dude who snatched the batteries at set 340.

The bugger could only have done it by following us -- but how without being detected?

The long day was waning as we drove back to the ranch pondering the motives of a thief who would steal one camera and pull the batteries on another.

After a wash and a beer later I was insisting once again that the Sony s600 doesn't work unless there's a proxy battery in place."

"Let's do a test" countered RandomTruth.

I powered the camera's controller and waited . . . the PIR diode switched on for a minute of initialization, blinked 4 times, did the walk test in another minute of so -- the suspense was unbearable -- and then to my utter astonishment the camera fired up and extended the lens!

Surely RandomTruth was now convinced the codger knew zero about electronics, but another gulp of beer refreshed my memory -- I had left the fresh batteries in the camera.

We repeated the test sans batteries and the camera didn't work.

Craig arrived the next morning bright-eyed and bushy-tailed and listened patiently to our story.

A few minutes later he was assembling a metal detector. Then he read the manual.

We returned to the scenes of the crime, and learned that the trickster had not tossed the batteries into the grass behind the hollow log.

Craig drove blithely past the bend in San Juan Creek where we had searched vainly the day before.

"Where are you going?" we protested.

"That's not where the camera is."

The next bend in creek looked almost identical to the one we had just passed.

And there we found "the stolen camera" with pictures of raccoons -- a new record for our survey. 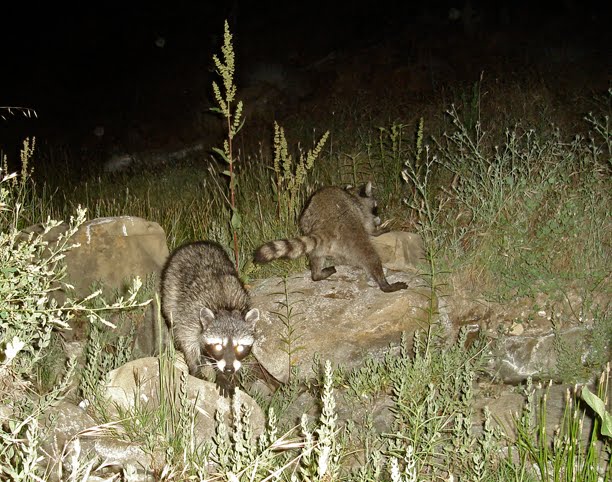 So many thoughts -- a year of work to photograph raccoons, the value of a good guide (our man Craig), our bumbling search at the wrong bend of the creek, and the unsolved puzzle of the missing batteries.
Posted by Camera Trap Codger at 9:52 PM 8 comments:

Labels: This can not 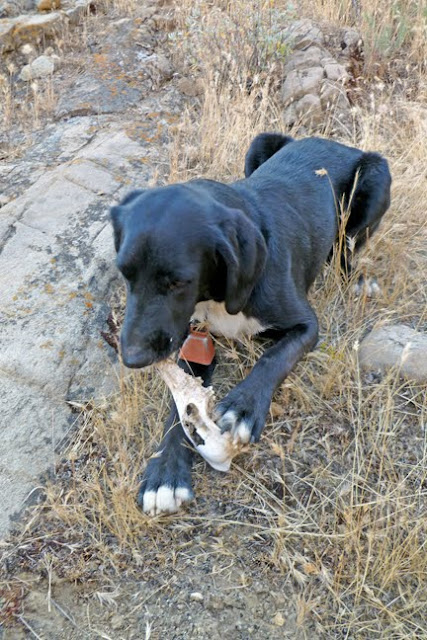 Gnawing an old coyote skull was one of Fred's happier moments at Chimineas last month.

The rest of the time he attracted deer flies from far and wide.

These particular flies were small with a banded abdomen (like many species) and they feasted on the thinly haired skin immediately behind his nose pad. 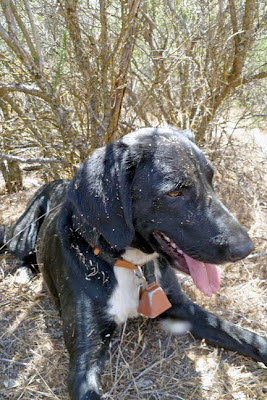 A panting short-haired black dog is a supernormal feeding stimulus for biting flies, which are attracted to carbon dioxide and infra-red radiation.

In fact, one of the more effective biting fly traps is a beach ball spray painted black suspended under a funnel that leads to a jar.

Fred was every bit as effective as an attractant, and for a fellow who usually seems impervious to pain he clearly didn't like the flies.

Pawing his nose and scraping a hole to lie in didn't protect him.

They supped well, and by the time we got home Fred's nose had a thin scab the size of a dime.
Posted by Camera Trap Codger at 10:53 AM 3 comments:

At last a tawny cat 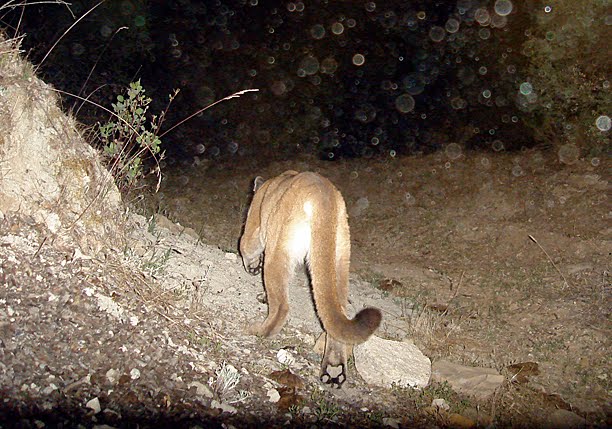 "You can't roller skate in a buffalo herd", and it's hard as hell to camera trap in a herd of cows.

But somehow we pulled it off.

Yes, we added mountain lion to our mammal survey of Chimineas.

It had remained on the "elusive and suspected species list" for a full year.

The dry wash we selected for set 245 didn't look particularly promising, but you never know.

We were also under the mistaken impression that there were not cattle on this particular range. 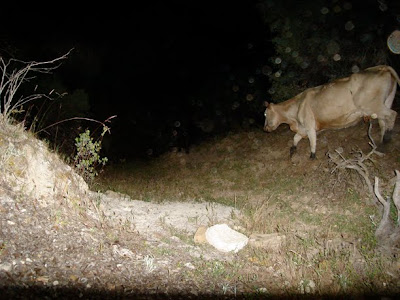 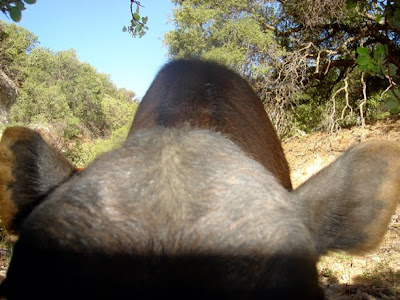 Cows were coming and going day and night, and almost daily they took the liberty of adjusting the camera's perspective. 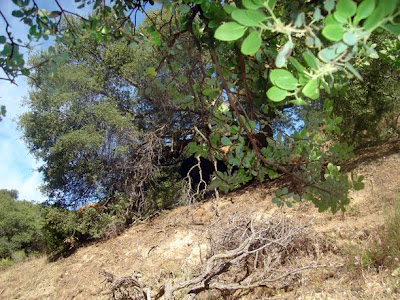 Cattle were in three quarters of the 95 photos. 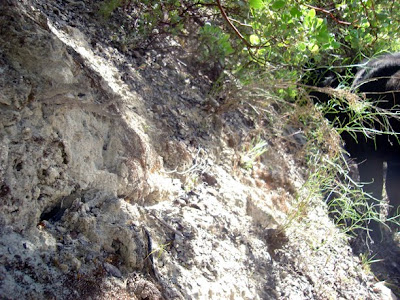 But miraculously they bumped the camera back into its original position 2 and half hours before the cat strolled up the arroyo.
Posted by Camera Trap Codger at 9:03 AM 6 comments: