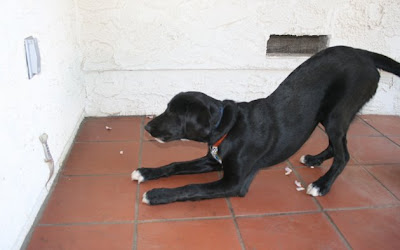 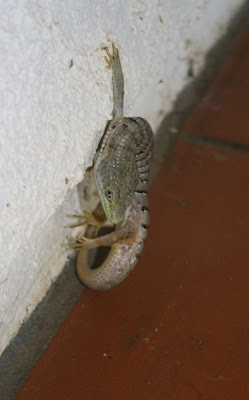 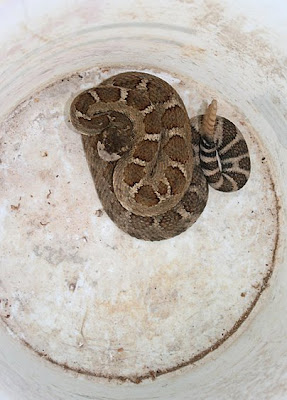 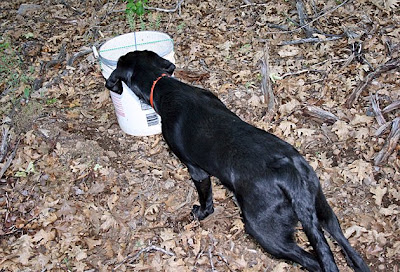 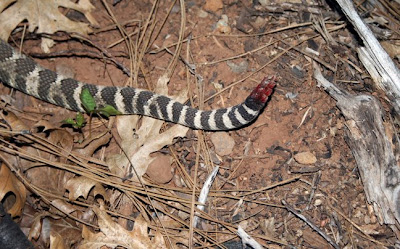 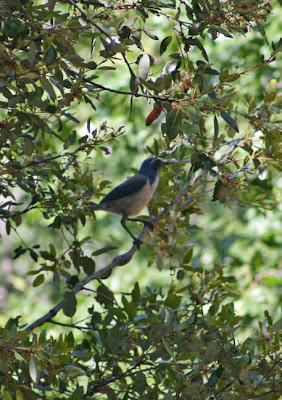 It's sneaky-jay time of year.
Cavity nesters are busy feeding their young and sneaky jays are on the lookout.
The ecological theatre is in the potting shed where the oak titmice have nestlings in the box.
When I hear titmice sphishing, I walk to the shed and look up into the live oaks, and there they are dancing about in a frenzy of alarm.
Seeing the jay is a different matter.
Whatever the jay -- Steller or scrub -- it tries to be cryptic. It hardly moves. In fact, it almost looks sleepy.
But I have seen this little drama play out many times, and I know the jay is searching for helpless fledglings.
Soon the fledglings will be out and about, and for a few days they'll be highly vulnerable.
That's when sneaky jay will make its move as it did last year.
I couldn't see the fledglings because they were motionless.
But the jay pounced when a fledgling moved, and it flew off a little heavily with the squealing prey.
Today I was a titmouse defender. I mean, I didn't build the nest box as a feeding station for jays.
"Get the hell out of here," I protest as I toss a stick up towards it.
Under the usual  circumstances the jay would be gone, but now sneaky jay only flies up a branch.
It doesn't regard me as a threat, and it has a lot more time than I do.
Posted by Camera Trap Codger at 9:02 PM 2 comments: 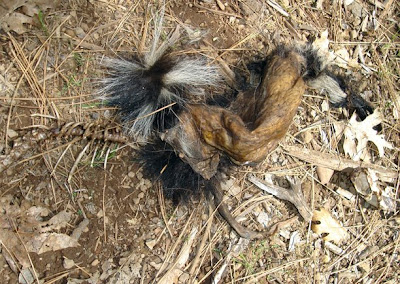 [Skin, skull, and spinal column of the striped skunk.
Leg bones with feet attached were nearby.]
It's not often that you find a skinned skunk on the trail, but there it was.
Fred was sniffing it intensely.
Whatever ate it, it dined fastidiously.
The inverted hide is what you get when a predator pulls flesh from the torso and limbs while standing on the hide.
Its hard to say what killed this skunk, assuming that it didn't die of other causes.
In this area, gray foxes, coyotes, bobcats, mountain lions, and great horned owls are the common predators reported to eat skunk, usually when quite hungry.
I'd rule out mountain lion, because a large cat would have eaten the backbone. The same for a coyote.
A bobcat or a gray fox, on the other hand, would nip and shear the meat away from the backbone.
My hunch? . . . we're looking at the table scraps of a bobcat or gray fox.
Posted by Camera Trap Codger at 8:31 AM 4 comments: 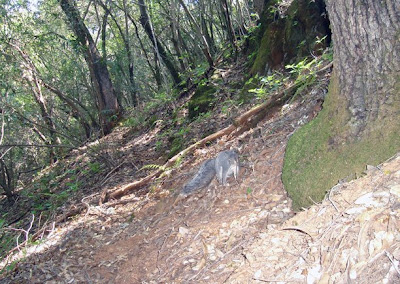 [This is a feeder trail to "El Paso", with (aaargh) the most common user.]
Since I made such a big deal about "El Paso de las Pumas", I guess I have to write a follow-up.

I waited a month to check the two cams at El Paso, thinking I'd get at least a few bobcat and bear photos, and maybe even a shot of the elusive puma.

Instead, I got 9 pictures of squirrels and one of a female red-shafted flicker. The flicker photo made me feel a little better. 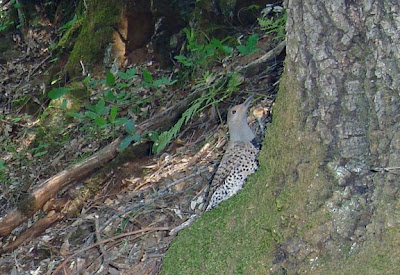 I set another cam on a different segment of the main trail. So I have three cams waiting to ambush a big cat. 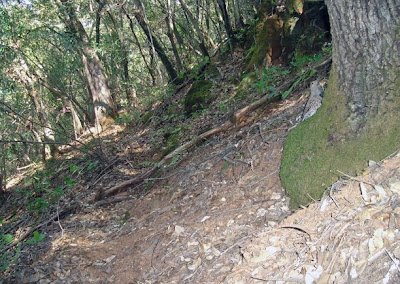 [Flicker, uncropped]
I'm not ready to give up on the site, but in the mean time I guess I'd better call the place "El Paso de las Ardillas".
Posted by Camera Trap Codger at 9:23 PM No comments: 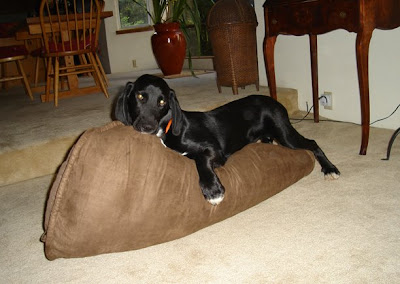 The redhead wanted to buy Fred a nice bed, so he could lounge near us in peaceful repose after dinner.

That was a couple months ago, but now he has calmed down a bit, and responds better to commands.

So we bought the big soft dog bed at Costco.

It was love at first sight. The bed arouses all kinds of adolescent dog passions.

He bites and pulls it around, rolls on it, and as you can see -- he really loves it. 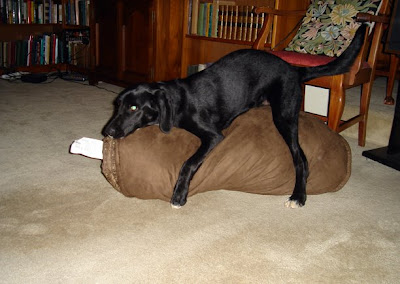 It stirs up such excitement, we limit his play dates to about 10 minutes max.
Posted by Camera Trap Codger at 9:26 PM 4 comments: 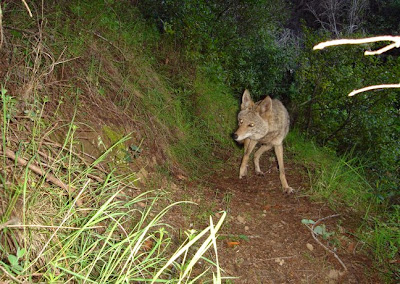 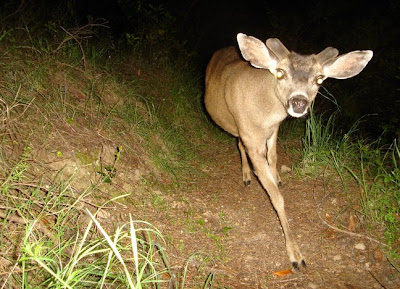 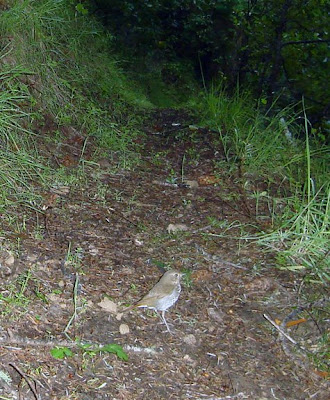 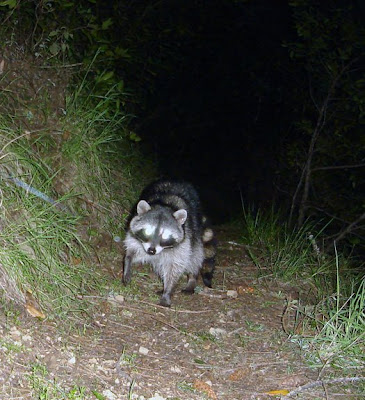 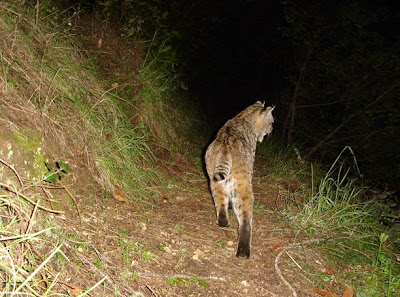 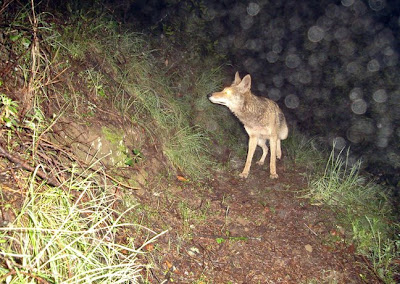 After I left that evening, it took 400 photos in two and a half hours -- filling the memory stick. A couple of moths were the only animals photographed.
Posted by Camera Trap Codger at 9:16 PM 6 comments: