Rod Jackson, CEO of the Snow Leopard Conservancy and Abhi Mandela, a firmware engineer from Silicon Valley dropped by last weekend to use the shop and talk camera traps. 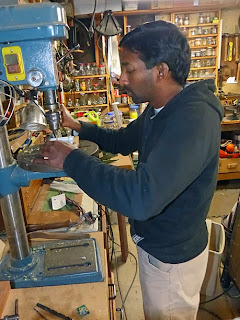 Abhi's fascination with remote camera technology was nurtured as a project assistant to Dr. Andre Pittet at the Indian Institute of Science (IISC), Bangalore.

Now he is helping Rod design an "electronic scarecrow" for snow leopard conservation.

Livestock -- from goats to yaks -- are easy prey for snow leopards throughout their range.

One leopard can slay a herd of goats in a single night, even when they are corralled right next to the shepherd's hut.

It has survival value in the remotest parts of Asia where there are no people.

But killing livestock belonging to montane pastoralists is the easiest way for a snow leopard to earn a death sentence.

Why not make the corrals cat proof?

The answer is that alpine herders can't afford to roof their drystone-walled corrals.

They live in a subsistence economy with an annual income of less than $400-$600.

So Jackson and his supporters are developing non-ethal deterrents.

Hopefully they will work as well but will be a lot less expensive than building a predator proof livestock pen.

We spent last Saturday laying out the work and drilling holes for switches and cables, and my good neighbor Richard, who can build practically anything offered his usual sage advice.
Posted by Camera Trap Codger at 8:30 PM 7 comments: