Veteran of the Big Burn? 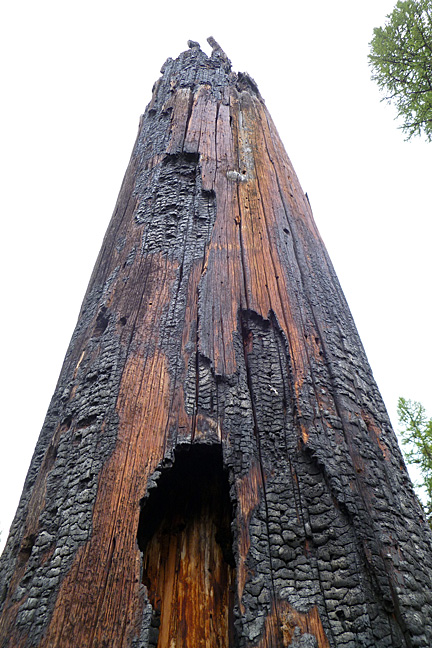 The Big Burn of 1910 is unknown to most Americans.

Writer Timothy Egan called it "the fire that saved America", and his book is a must-read. 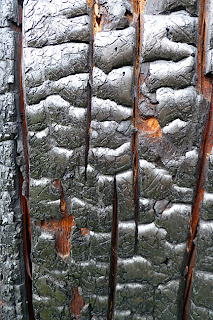 The human survivors of the fire are long gone, but their descendants in Montana and Idaho know about it, and a few charred snags still stand as monuments to its devastation.

Flathead County, Montana was one of many satellite fires during the Big Burn of 1910, and thirty years later fire again struck the Sanko Creek area where Carl's cabin stands.

When Carl invited me to see "a tree with some history" I followed him down the hill to this veteran of fire.

"I cored several trees on my land", he said, "but for some reason I ignored this snag."

Obviously he regretted the oversight.


The tree was a ponderosa pine bearing a long triangular scar, but there was no sign of fire on its exterior.

The cavity on the other hand was heavily charred and seemed to have made a perfect chimney. 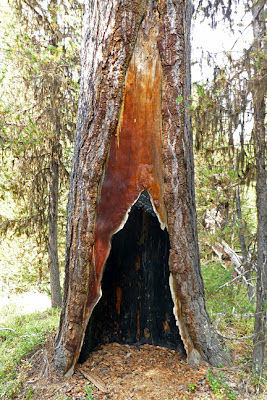 During lean periods Kootenai and Salish people stripped bark of certain conifers and aspen to get to the tasty and protein-rich cambium, and this left a triangular scar.

Were we looking at the work of native Americans?

Recently, "culturally scarred trees" have been mapped and studied not far from here in Glacier National Park, but the scars on those trees all start above ground.

The tree had a story, but we couldn't cipher it.

We wanted to think we were looking at the work of native Americans.

If so, did their bark peeling make the old pine more vulberable to fire?

Or did a lightning strike prepare the tree to become a burning chimney in the Sanko Creek fire of 1930?

Was it the work of a single fire or a series of burns?

A dead tree can sure get a couple of old codgers thinking, but we had more questions than answers.

Anyway, I wanted to record this mystery in pixels, so I came back the next day, and found a chickaree had laid claim to the place.

It clucked and raised hell the whole time I was there.
Posted by Camera Trap Codger at 10:20 AM 5 comments:

A couple weeks ago I tried my hand at "timelapsing" the feeding frenzy at Carl and Ginger's cabin in western Montana.

I normally use the standard homebrew with passive infra-red sensor built into the controller, but this was a photo-op chock-full-o-squirrels, and Carl and I wanted to test two new set-ups.

We rigged my Canon Rebel XTi with a Trailmaster 1500 active Infra-red sensor, and a highly accurate sensor it is.

The subject has to break the narrow active infra-red beam to trigger the camera, which means you can capture photos in a specific location and distance from the camera.

The downside it that it takes more time to set than a regular homebrew, but that's a small price to pay for a crisply focussed photo of Sasquatch, right?

We also played with a Canon A630 that I had hacked using the Canon Hack Development Kit or CHDK.

With this camera we experimented with timelapse photography using intervals of 30 and 5 seconds.

I should point out that you can create timelapse sequences with irregularly timed exposures using any trail camera if the subject rewards you with a pile of images over a relatively short span of time.

True timelapse however shutters pictures at regular pre-selected intervals using a controller programmed for timelapse, or in this case, a timelapse script for CHDK.

When we compared the results, we found that . . . 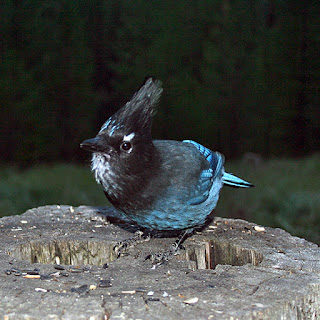 the Canon-Trailmaster set-up took very good pictures, but many opportunities were lost because of the narrow zone of the AIR sensor. In other words, it wasn't clicking away at one picture every 5 or even 30 seconds. 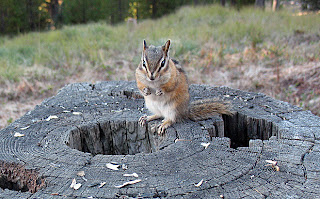 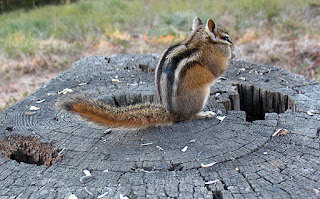 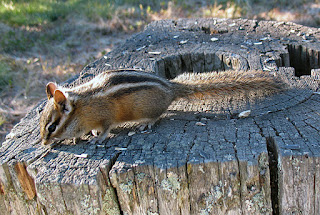 The Canon timelapse on the other hand generated a huge number of images, and so there was bound to be a few good ones showing diagnostic characters.
Thus we identified the chipmunk as the red-tailed chipmunk (Tamias ruficaudus) -- a new species for the codger.


With the exception of Steller's jays, which were constantly flinching, the birds were not as bold as the rodents.

Here's a couple hours of stump dancing condensed to a couple minutes.