I'll never know for sure where Fuzzy came from, but suspect that Fred absconded with it from a neighbor's front yard.

We had great fun with Fuzzy, as you'll see in the video, and the game was a good way to dust the truck.

But Fuzzy's departure was as sudden and mysterious as its appearance, and that was end of the string tests.
Posted by Camera Trap Codger at 10:27 AM 2 comments:

I just scratched the white winter weasel from my camera trapping bucket list.

The white long-tailed weasel (Mustela frenata) remains to be camera-bagged.

You find them where you can rely on long snowy winters, which is north of the 40th parallel.  On the mild west coast, the white-weasel-line jogs north into British Columbia.

I bagged my white weasel near Yuba Pass on a steep north slope, in a jumble of broken granite shaded by red fir.

Some time in the past a large mass of granite cleaved and released a large flake of stone that slid several feet and settled against its mother.

The result was a narrow slot, a shelter, the kind of place small boys and codgers in their second childhood love to explore.

I was ready to camtrap "the granite flake" two summers ago, but a yellow jacket nest changed my mind.

It was only the size of a grapefruit, but big enough to scare me off. 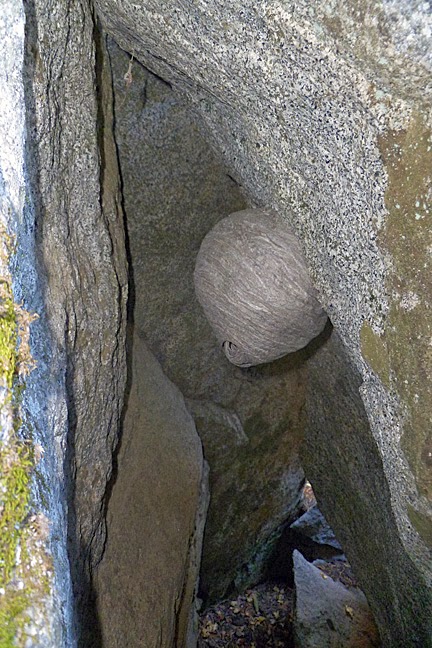 The nest was gone last fall, so I set the camera on October 8th using civetone and castoreum as elevated scent lures.

Bill and I checked it last Wednesday. The Lithium AA batteries lasted 94 days, and in addition to the white weasel -- here's what we got:

You all know, of course, that we're in a bad bad drought.

Below the current snow line those white winter weasels are an advertisement to predators, mainly carnivores and birds of prey.

Not to worry my friends, the furry and feathered agents of natural selection have already started to fix the problem.

[thanks to "Bill W, MJC" for the good company and watchful eyes]

Here are some terrific camera trap photos of carnivores from the Western Ghats, the major mountain range of southwest India.

They are a testament to the dedication and leadership of Ullas Karanth and his able colleagues at WCS-India.

Ullas (lower right) has devoted his career to the conservation of tigers and the landscapes they depend upon.

The tell-tale equipment seen in the photos is a reminder of the first generation of commercial trail cameras.

The Trailmaster active infra-red motion detectors seen in the background rely on a beam of IR light between a transmitter and receiver.

The detector can be adjusted to detect different species based on the duration of beam interruption.

The Olympus point and shoot cameras were quick acting 35 mm models that captured the action quite well.

Posted by Camera Trap Codger at 10:08 AM No comments: