The lofty realm of the tree vole 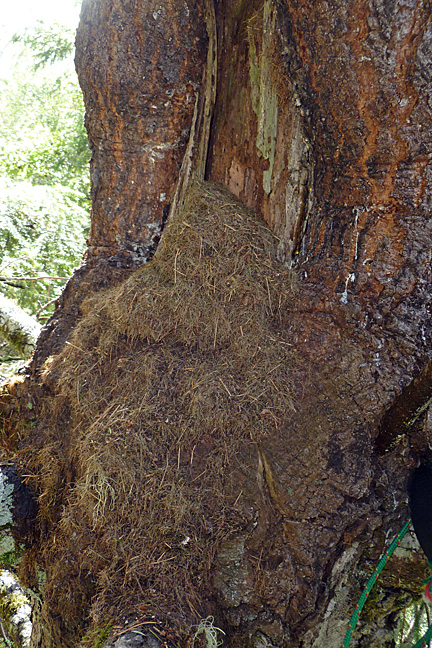 “’It was a hard climb.’ Bailey wrote in his field report, ‘but the large flat nest at once showed fresh signs and I dug in with great care.’”

It was 1914 and Vernon Bailey was at Spencer Butte, Oregon, perched in the lofty realm of the red tree vole 80 feet above ground.

A few moments later a vole appeared on the limb and started its escape.

“With increasing anxiety, he watched the little vole make its way along the branches, deliberately, slowly, seemingly dazed by the bright light of daytime.

“Conflicting feelings tugged at Bailey, his paradox realized: he never before had seen a living specimen of a red tree vole and wished to observe as much of its habits as he could; at the same time he did not want to lose his opportunity to collect the specimen.

“’I could take no chances of losing so precious a specimen’, he later wrote. With the tree vole about twenty feet from him, he drew his collecting pistol, aimed slightly to one side so as not to damage the fur, and knocked the animal to the ground.

As George Jobanek wrote in his excellent historical chronicle of naturalists pursuing tree voles from which I have quoted, the Biological Survey’s Bailey finally collected the elusive red tree vole a day before his 50th birthday.

If the codger is lucky, he’ll "bag" the rodent in pixels before the year is out.

Fortunately, I didn’t have to climb 80 feet, and I was armed with a camera trap rather than a shooting iron.

A meal that kept giving 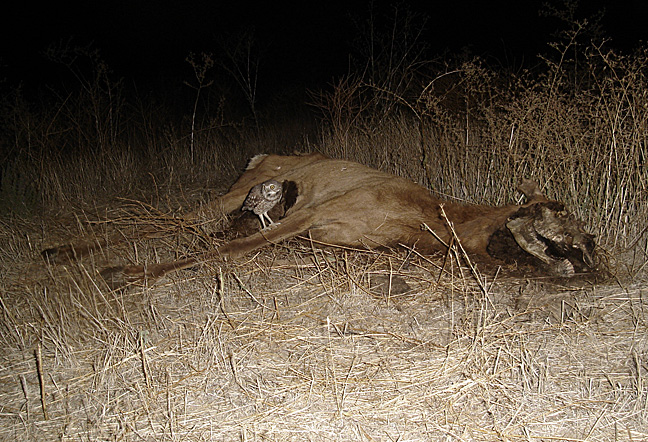 There was no gaseous bloat, no writhing skin bag of maggots.

Just a cold carcass, which in the words of cowboy curmudgeon Wallace McRae, had barely started its 'transformation ride'*.

The gaggingly repugnant but most sporting of camera trap sets -- the 'chest-cavity set' periodically tempts me as a route to up-close and personal pics of hide-tearing flesh-gulping predators.

Cavity sets,  if you are willing to crawl into dark places, are usually reserved for hollow logs, burrows and caves.

Wildlife photographer Alan Root knows no limits in such matters (at least in his youth), and to him we owe gratitude for showing the marvelous possibilities in Mysterious Castles of Clay.

Even if you don a garbage bag, setting a camera in the chest cavity of a large dead ungulate is a messy feat.

But who would opt for the alternative of crawling into the rib cage and spending the night there with camera in hand?

And yet, there's more than one account of a freezing frontiersman bundling up in a fresh buffalo hide or crawling into an eviscerated but steaming carcass.

A sound sleep they didn't get, but kick-boxing wolves under a wet hide certainly warmed them up.

But I'm getting off track.

As you might have guessed, our cojones were not equal to the task, so we settled for the unimaginative 'cam-beside-carcass set', and we still got some surprises.

The cams were set for night photos, but circumstantial evidence told us that vultures first feasted on elk lips and eyeballs; then they scalped the faces, slit their bellies, dragged out the viscera, and liberally whitewashed the neighborhood.

The carcasses grew gaunt but were still in one piece a month later.

Only 3 scavengers were to be counted in pixels, and only a deer mouse was photographed climbing into the meat locker.

The rest tended the carrion like a garden, apparently picking tender maggots and crunchy beetles from the exodus generated by aging flesh.

A burrowing owl was the most popular visitor -- making 9 forays. 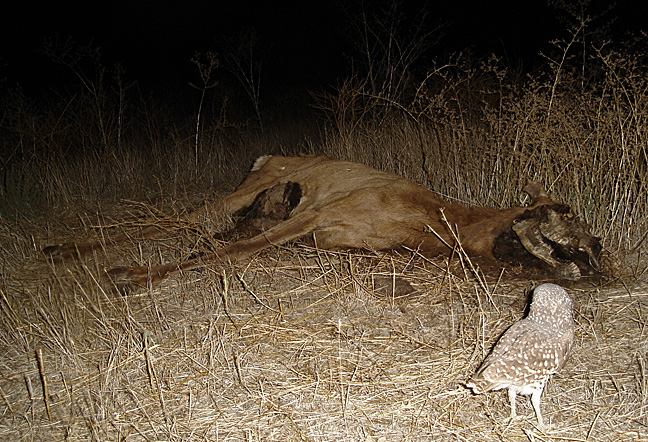 A coyote made 3 visits, but was never seen tearing hide or gulping meat. 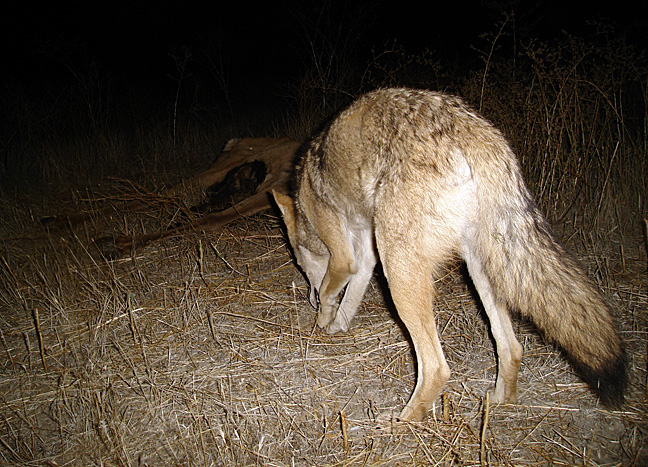 Like the owl it seemed to harvest insects, but lacking a beak, straw was unavoidable. 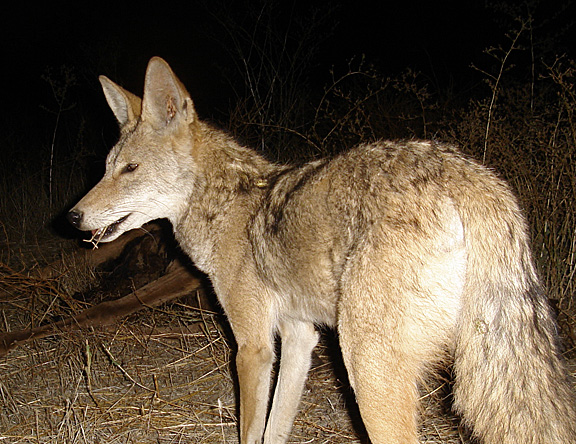 The fare at this diner didn't measure up to the beef at the Carrion Cafe.

The elk was more like a garden -- a meal that kept giving.


*/ If you were too lazy to click on the first link, I'm reminding you that you won't regret reading McRae's "Reincarnation".
Posted by Camera Trap Codger at 9:47 PM 4 comments:

The codger's spending more time on the road.

The charisma of the red tree vole made me do it.

This corner of tree vole country is 250-road miles from home, and for half of the ride I track the winding course of the Trinity River.

This is also the heart of Bigfoot county, but the only big feet I saw were those of middle-aged men in waders.

They leave their pug marks between the road shoulder and the banks of the Trinity.


The ride to the Chimineas Ranch on the other hand is even longer -- 400 miles from home -- and the scenery only gets interesting the last hour or so when you leave Rt 5.

I prefer the ride to Humbolt County, where I am not vulnerable to the uncanny physiological effect of wide open space on the weight of my accelerator foot.

A few months ago the codger fell victim to this phenomenon on a remote stretch of highway, which caught the attention of an officer of the California Highway Patrol. 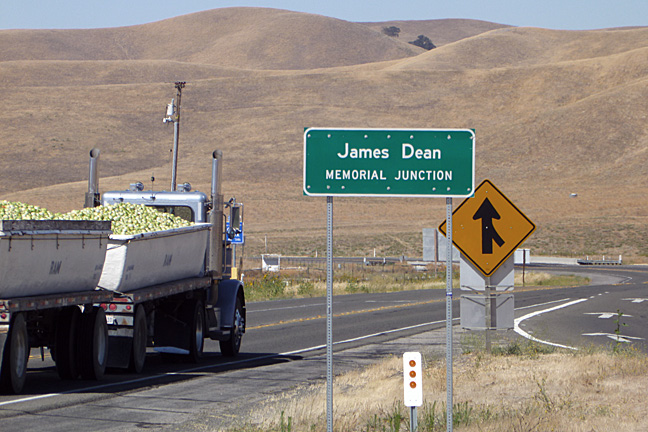 It wasn't far from where James Dean met his ending 56 years ago.

I thanked the officer with mixed feelings and drove home in a blue funk.

I paid the fine, paid the fee to attend on-line traffic school, and read the lessons every morning over coffee.

When I passed the written exam the burden of guilt and worry disappeared.

The codger no longer races with the flock down Rt 5.

He looks like a lame old goose in the right lane, cursing the 18 wheelers.

And when he crosses into the fast lane he lives with the ire of Nascar impersonators who ride his tail, flash headlights, sneer, flip me off, and pass in a huff.


No longer does he just look like a codger.

It makes for long and trying road trips.

My adventures are reserved for the woods. They begin when I arrive, not when I hit the road.

If you are interested, read one of my old buddy's accounts in Rivers Wind Notes.
Posted by Camera Trap Codger at 8:31 PM 9 comments:

When the water's low 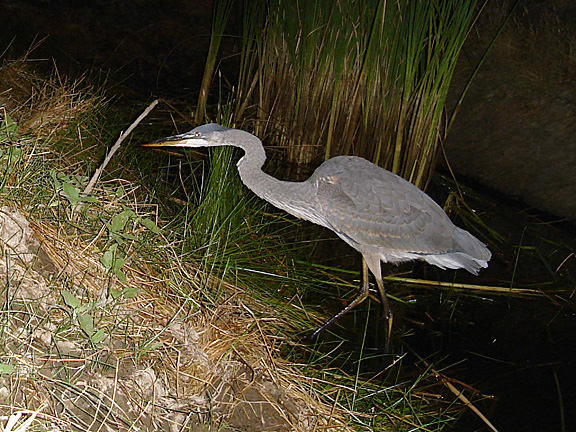 It didn't take long for the great blue heron to nail something in the darkness -- perhaps a tadpole or fish.

With the exception of weasels and ringtails, it seems almost everything at the Chimineas Ranch gravitates to the waterholes in late summer.

They don't always just stop for a drink either. This pool was filled with fish, perhaps bluegills, and the raccoons waded about while the pigs rooted on the banks. 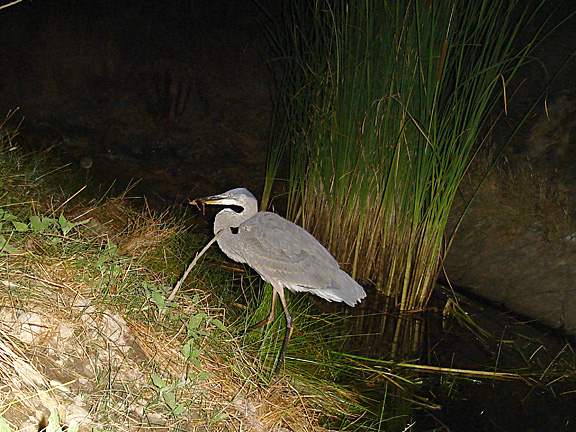 For the life of me I can't identify the prey. 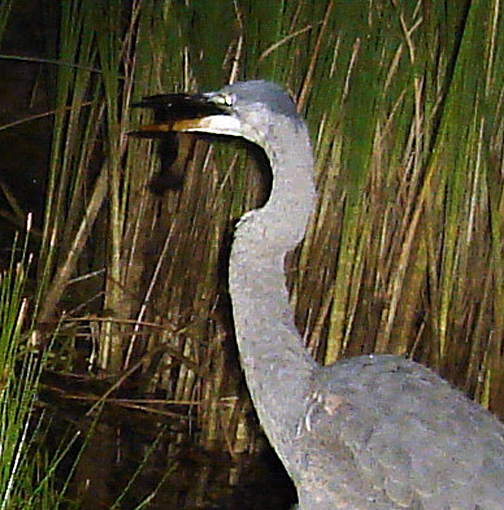