Video vision in the tunnel - Part 2


Our first attempt at subterranean video this year was disappointing.

Had the camera been placed differently the footage could have been better, but there was also the problem of the curious bear cub that dismantled the set.

The subterranean action however was more than enough to call us back.

Our second attempt in August was in a different segment of the same mountain beaver (=showtl) tunnel.

This time I came prepared with a customized mount that could be spiked into the hardpan on the floor of the tunnel and nailed into the log embedded in the silt bench above the tunnel.

We covered the vertical hole with a large flitch of wood.

As you have seen in Part 2, the bear didn't show, and if any subterranean critters bumped into the camera they didn't move it.

But I still didn't get the angle of the camera quite right. It should have been aimed up into the tunnel. The focus was also off, and the microphone made hideous sounds (which I'll try to remove -- sorry about that).

I just replaced the lens of the DXG 567v with a 4mm wide-angle CCTV lens, which will take in a much wider view.

Posted by Camera Trap Codger at 9:20 AM 6 comments: 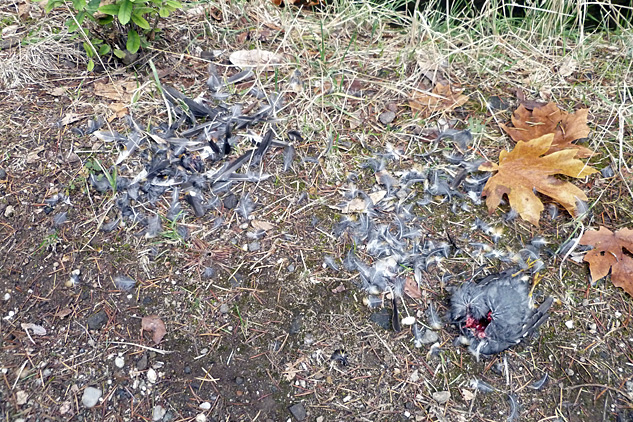 Two codgers walking a dog encounter the scene above at 2:15 in the afternoon.

Obviously, something killed Chicken Little, but there is no predator to be seen.

The codger's dog sniffs the carcass briefly but otherwise ignores the scene.

The carcass is cold, the tail has been plucked, and the head has been pulled off.

The neck has been eaten, as well as the wings where they attach to the pectoral muscles.

The head is uneaten. 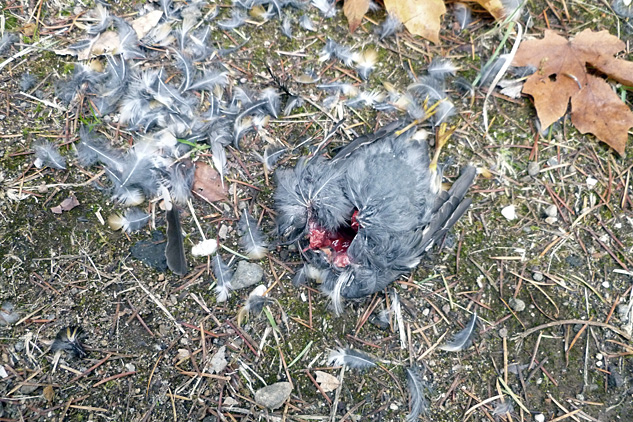 1) What species is Chicken Little?

3) Why didn't the predator take Chicken Little when it left the scene? 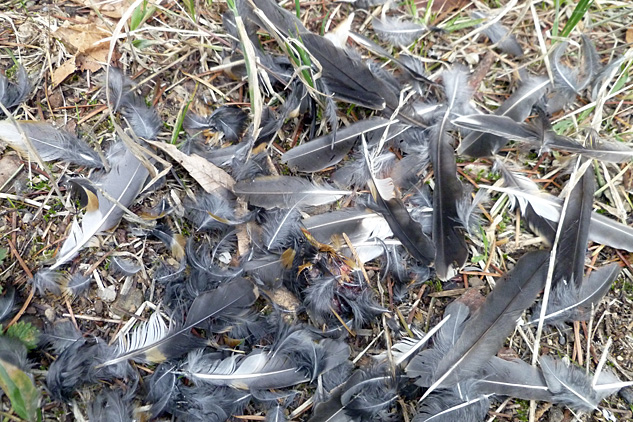 You don't get good news like this very often.

Thanks to Dave Parsons and Brian Miller for the heads up.
Posted by Camera Trap Codger at 7:53 AM 2 comments:

I wasn't expecting miracles at set 574, but it always seems like a miracle when I camera trap a weasel. Especially a blue-eyed weasel. (Just kidding, folks; those pretty blue peepers are the reflection of the camera's flash from the eye's tapetum lucidum).

This weasel sniffed the castoreum just long enough for a single photo.

The set was under a boulder on a steep slope in red fir forest.  A few de-scaled pine cones identified it as an undercover messhall.

The camera snapped 431 photos in 33 days, but 60% were blank images most probably triggered by fleet-footed rodents.


Deer mice and long-eared chipmunks accounted for most (=80%) of the wildlife photos.


A bright-eyed long-tailed vole posed nicely for one photo,

Every species of mammal left at least a few self portraits while sniffing the irresistible castoreum.

The stuff is a truly broad-spectrum attractant for mammals and indispensable to this camera trapper.


I can't identify the only critter that ignored the scent lure.

At first I thought it was a scruffy molting wren.

But now I wonder if it's a chick of a blue (sooty) grouse, mountain quail, or even a sora rail?

Early September would seem a bit late for a chick, no?

Any opinions out there?