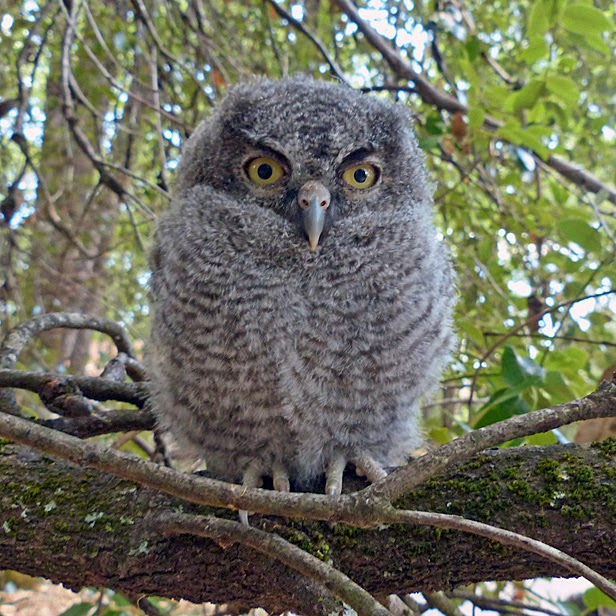 This little fellow, a fledging Western Screech Owl showed up this afternoon out of nowhere.

It was on our neighbor Dave's driveway, and the AT&T man (who was repairing a squirrel-chewed telephone line) put the owlet on a limb and out of harms way.

Neighbor Dave told neighbor Richard, who told me, and I grabbed my camera and snapped these photos.

Seeing a live owl or a young fluffy like this always makes my day. 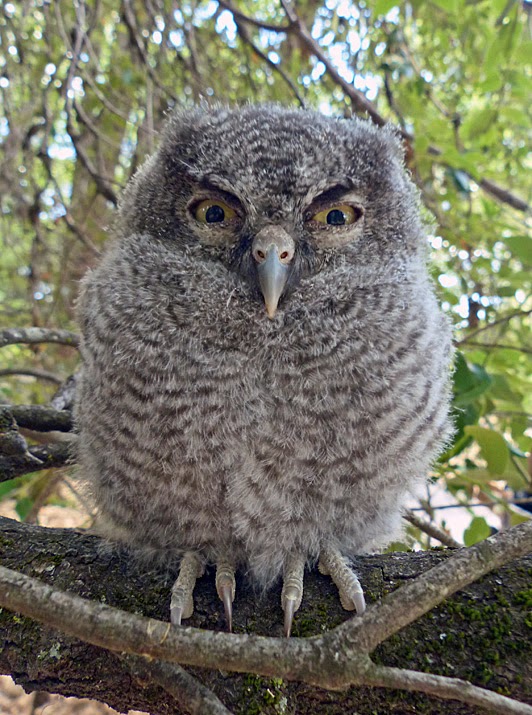 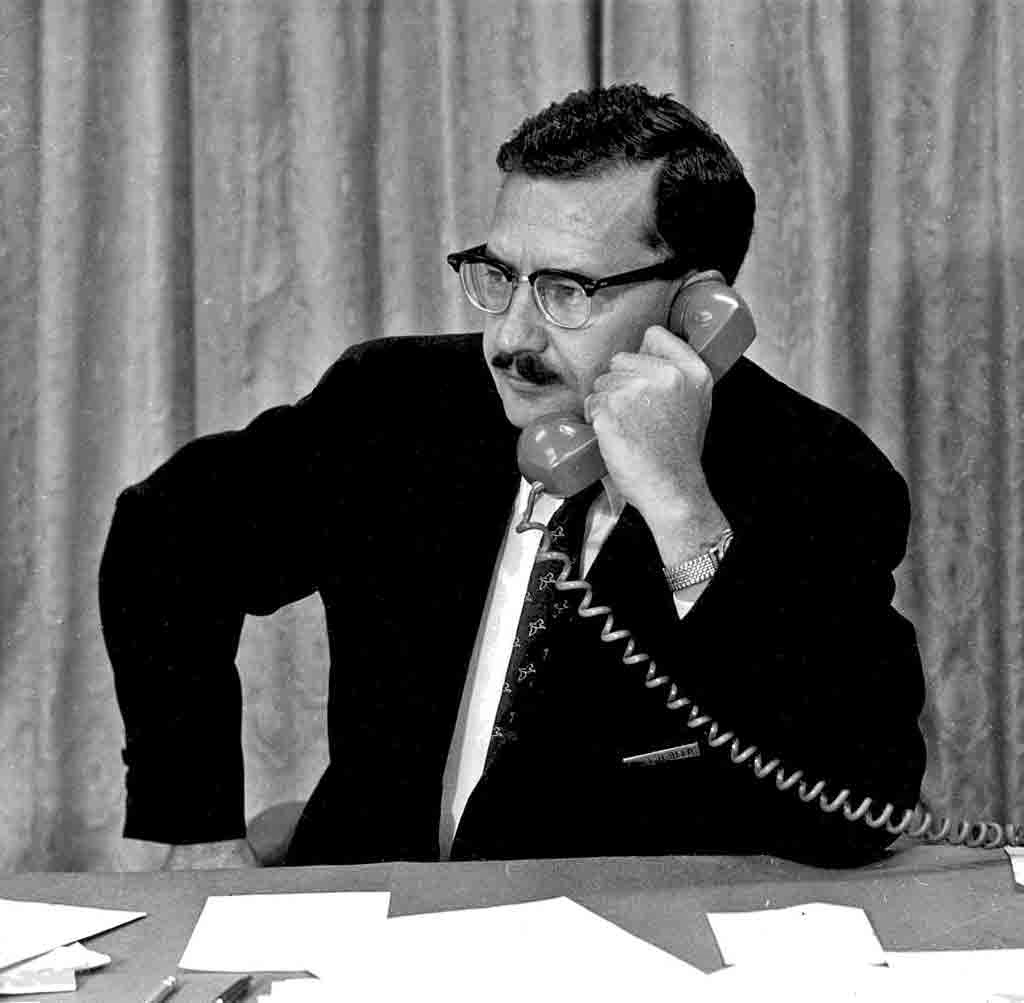 Another installment from my presentation at the National Zoo last month.

The Clash of the Cultures – academics and managers

Ted Reed hired a top notch staff. The National Zoo in the 1970s probably had more Ph Ds than any other American zoo.

But Ted had created a 600 lb gorilla.

His scientists were free-thinkers, could "pile it higher and deeper" than most zoo folk, often disagreed with each other, and could be relied upon to question the Director's decisions.

The zoo's Academics were from the University of Free Thought, and its Managers were from an altogether different universe.

Ted wasn't used to the ways of the zoo's new academic culture.

One of the freethinkers was Professor Edwin Gould, who had quit his job at Johns Hopkins University to become the zoo's Curator of Mammals.

At the time there was an arthritic and tired old Bruin at the zoo named Smokey the Bear.

The iconic Smokey roused the Professor's deepest sentiments, and true to his academic upbringing Ed wanted to air his feelings with the Director.

He made an appointment with the Director, and shared his views about the lessons of wildfire in the American west, about fire ecology, and about the misguided policy of the US Forest Service.

He finished his discourse with a zinger: “We all we know it’s a lie.”

“Gould, forget about Smokey. Smokey’s a big hit with the visitors and the Congress, and he’s here to stay. Go back to your office and think of some neat animals we can get for the public.”

Walking back to his office, Gould could only chuckle at the Director's skillful dismissal.

The Problematic issue of Species Selection

Selecting species for the newly acquired Conservation and Research Center in Front Royal, Virginia, was often more contentious than Smokey's presence in DC.

Dr Reed convened a CRC planning committee and monthly meetings were held at the center.

The committee selected the Pere David’s deer as the first species to go to the center.


They had bred themselves out of space at the zoo, and moving animals to Front Royal solved the zoo's surplus deer problem.

The Scimitar horned oryx was the second species selected.

Ted didn’t care. Bactrian camels were uncommon in zoos at the time, and they were a “bread and butter” species. When mom and dad took the kids to the zoo, one of their expectations was to see camels.

Ted wasn’t to be deterred, and I am glad he stood his ground.

Meade Barn was retrofitted for camels, and the new camel herd arrived from the Minnesota Zoo with fanfare.

The Governor of Minnesota and his selected staff arrived by helicopter, and Dr Reed and a few NZP staff  attended the ceremony at Meade Barn.

We actually received two breeding males, Humphrey, named for a popular country hit by Blanchard and Morgan, and the small-bodied Jimmy,

Even with 30 acres to explore, Jimmy spent all his time trudging a small figure 8 in the turf. He was totally deranged, and a sad example of what happens when animals are penned up in small enclosures.

But Humphrey showed all the promise of a breeding male.

During the winter rutting season he urinated on his tail and flapped it on his rear hump, and rubbed the coffee-colored fluid from his poll gland on the front hump.

Humphrey was also assertive and challenging to other camels, another sign of the testosteronized male.

They were cool mega-mammals, and charismatic in their own distinctive way. We started collecting data.


A year passed. When Dr Reed visited the center he wanted to see camels first, and asked when we were going to have babies.

Humphrey wasn't delivering the goods, so we organized an observation team to monitor breeding activity.


Then our veterinarian, Mitch Bush, and colleagues examined Humphrey more closely and attempted to collect semen.

They discovered that our stud "shot blanks".

Despite his macho appearance, his testes had never descended into the scrotum. He was cryptorchid. He was the great pretender.

Word of Humphrey's impotence soon spread to other zoos, and that year the American Association of Zoological Parks and Aquariums (now the AZA) honored the National Zoo with four awards . . . 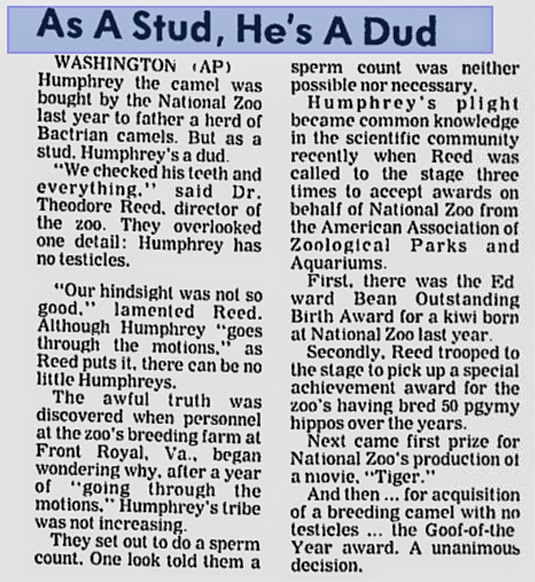 I was there when Ted received the award, and he played the fool artfully.

Recently, Ted's son Mark informed us that the award was the straw that broke the camel's back.

Ted believed that zoos generate enough levity without the help of special awards from the AAZPA.

The next year AAZPA's  board of directors announced they were discontinuing the Zoo-Goof-of-the-Year-Award.

I was disappointed with that decision, but it was one more example of the clash of the cultures.

Thanks to Kris Vehrs and Barbara Bueschel for locating the Associated Press clipping, to Ed Gould for sharing his memories of his early days at NZP, and to Mark Reed for filling me in on the consequences of the AAZPA's last Goof of the Year Award. 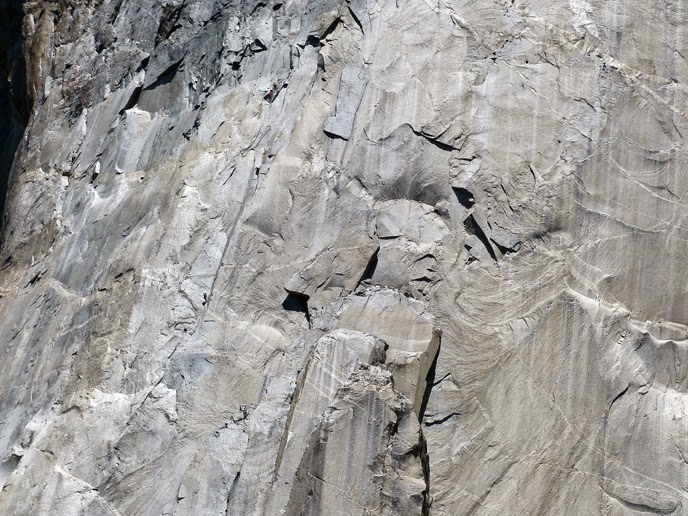 I get off on plutons.

So, this is my latest screen saver -- El Capitan in Yosemite National Park.

I took it a couple days ago with a Lumix FZ200.

The images from the hand-held camera were a wee blurry, but this one was taken on a tripod with delayed exposure.

Can you see the 3 climbers?

If John Muir saw Yosemite today he would be horrified, but for the rest of us, it is certainly still worth seeing.