A quick trip to Sierra County 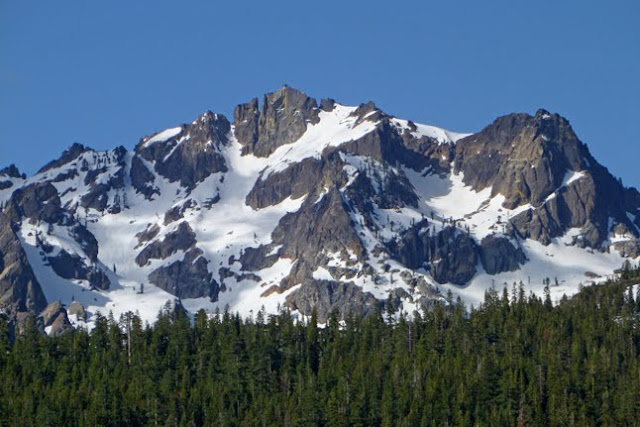 Sierra Buttes, not far from the camera traps
I made a quick trip this week to San Francisco State University's Sierra Nevada Field Campus, and knew I was almost there when Sierra Buttes popped into view.

Purpose? . . . to set camera traps for the upcoming workshop.

The ride had its distractions -- like the profusion of bush monkey flower in the Feather River Canyon.

Near Graeagle I stopped to photograph a field of lupine, and the perfume almost moved me to poetry.

At destination I barged into the alder thickets looking for Aplodon.

A demographic event has reduced the once thriving colony to a ghost town with one active burrow. 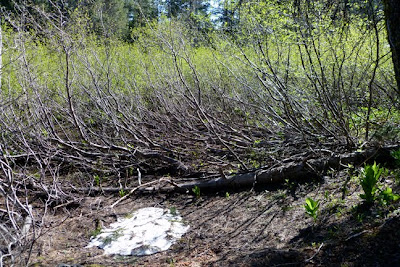 I set a cam at the single burrow and made two additional sets in the area.

Next I scouted logging roads for additional sites, but snow blocked my old Honda.

Then up to Yuba Pass where I pondered my next move over a sandwich -- decided to head for Deadman scree.

The problem was the Yuba River.

This codger wasn't up to rock hopping, long jumping, or pole vaulting the white water to reach the other side. 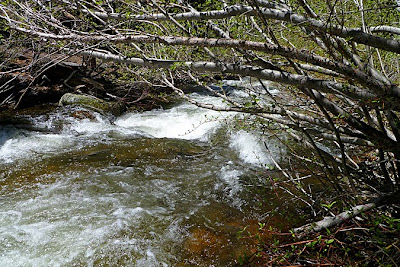 I drove back and forth looking for fallen logs, and found one that was safe to cross. It led to a boggy flood plain and an obstacle course of windblown limbs and fallen logs.

I set two more cameras with bear guards, one on a creek I had worked last year -- or so I thought.

Then I struck out for the home of pikas and bushy-tailed woodrats -- that vast expanse of scree that glares through the trees on Rt 49.

Having studied the quad the night before, I was relatively sure of my position.

Stumbling upon ancient patches of talus in the old red fir forest reinforced my confidence that I was on the right track.

The scree was southwest of me.

I had to be getting closer, but the expected opening in the trees didn't appear.

Unfortunately, talus slopes aren't shown on my GPS's topo map, and after crossing several drainages I realized that the various creeks flowing from the vicinity of Deadman Lake all look alike.

The scree was in the other direction.

I decided to cut my losses high on the slope and set the sixth cam. 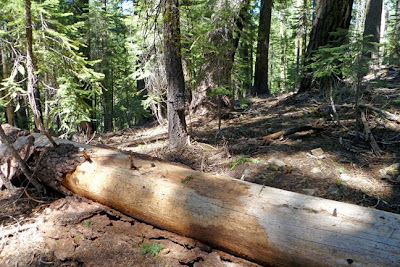 I looped back and headed downhill until the slope became a bit treacherous.

But there was a shortcut --  a very large red fir that had fallen steeply across the Yuba.

I crossed it in slow motion, tippy-toed through a campsite, and found my car a a half mile up the road.

Six cams are set for the workshop.

Posted by Camera Trap Codger at 5:38 AM 2 comments: 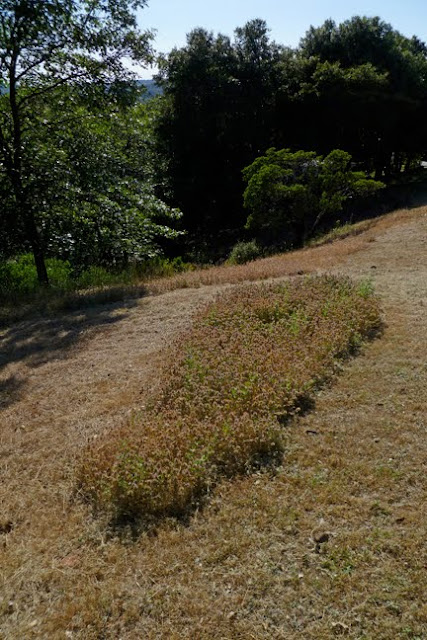 Fire season is just around the corner and you will be heartened to know that I weed whacked today like there was no tomorrow.
I felt a pang of guilt however as various katydid and grasshopper nymphs shot out of the botanical flak.
I knew my old friend Dave Rentz of BunyipCo, aka Mr Smiley, would not approve.
Never mind that his brother John is a retired fire chief.
Dave has had a lifelong love affair with orthops -- grasshoppers, crickets, katydids, and yes, even cockroaches.
When the non-biologist sees an entomologist doing his or her thing you often hear the comment  "Now I've seen it all."
Others may approach cautiously and ask "what are you doing?"
Mr Smiley's response was an utterance -- "Glasss-hoppah!" given with the crazed look of a character from "One Flew over the Cuckoo's Nest".
You have to admire someone like that.
So I designed the Mr Smiley Orthoptera Reserve, and felt a little better about my carnage.
Posted by Camera Trap Codger at 7:32 PM 4 comments: 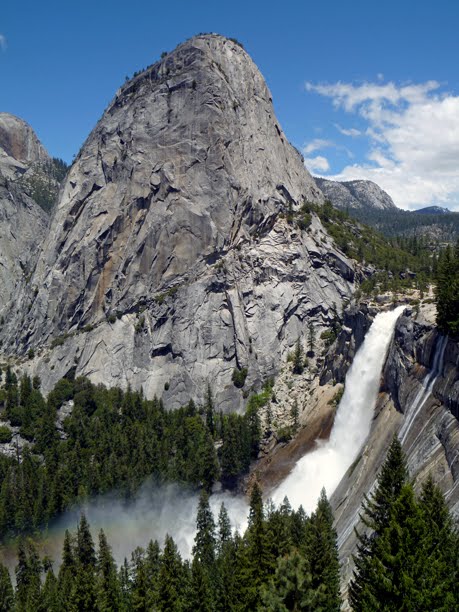 Nevada Fall, June 2010
The Merced River was in spate this year.  Really in spate.
It was unusually balmy as we drove down the central valley to Yosemite last week, and the warm air drifted up the Pacific slope and kicked off a serious snowmelt.
For the first time in 6 years we were not booked for riverside sites in the Housekeeping Camp, but when we saw the vacant flooded campsites no one in the group complained about being far from the river.
Since you needed waders to get around down there, the park rangers relocated the riverside campers to unoccupied sites, which bumped other folks who had reservations.
There were not as many happy campers this year, and the park maintenance crew were busy removing log jams from the bridges. 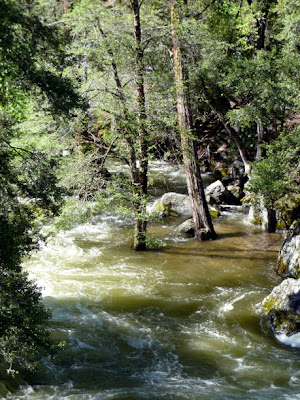 Below the bridge to the Mist trail and Vernal Fall.

All the same, the river was a thrilling sight, and we hiked to Nevada Fall past roaring cataracks and flooded banks. 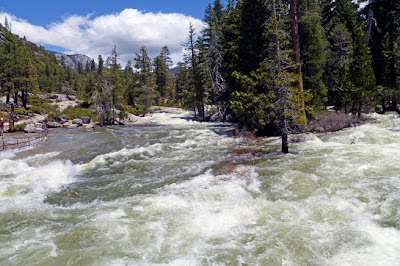 Just before it spills over Nevada Fall the river had spread over an area that was twice its width in June of previous years. 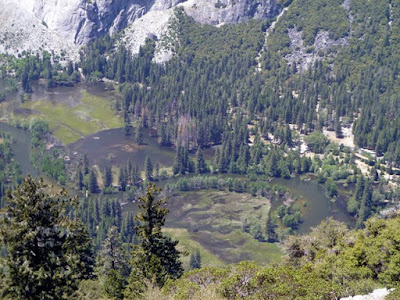 Here's the big water as seen from the Four-mile Trail to Glacier Point.

The river and falls roar around the clock, but it's best heard at night.

I don't know why, maybe it's the wind, but sometimes it sounds like breakers on a beach.
Posted by Camera Trap Codger at 9:56 PM 3 comments:

Badger in the mist 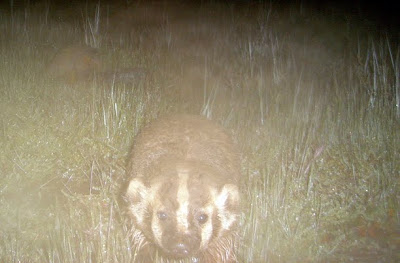 There was nothing new to show from the last camera trapping event at Chimineas.

Just a badger in the mist, though the mist was in the camera. (It looks like a youngster from last year's crop).

A kangaroo rat was busy in most of the frames. And a curious steer showed up a few days before we collected the two cameras. 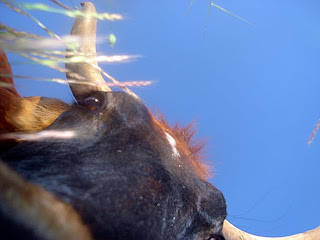 We're expecting some next species later this month because we made 12 sets in new and underrepresented habitats.
Posted by Camera Trap Codger at 5:02 AM 3 comments:

Brief encounter on the run 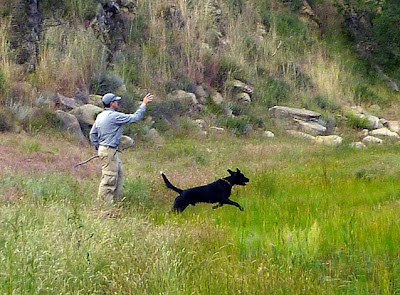 When they saw each other they were 50 yards apart, but that was about to change.

The border collie crouched like a predator -- the sheep intimidation thing, and Fred ran straight at it.

Speed the border collie turned and the chase was on.

I knew the cowman's border collies were faster than Fred -- I'd seen them chase ground squirrels.

Cattleman Ross, their owner with the Yosemite Sam mustache told me he once had a crossbreed like Fred.  It herded cattle, but always ate dust when it ran with border collies.


We watched as Fred raced after the border collie -- he was humping at high speed and was actually gaining ground. I was amazed.

For some reason however he started to veer off course.

He had switched to chasing rabbit I thought -- blame it on Canine Attention Deficit Disorder.

But then we saw another border collie running flat out after Fred.

Fred the pursued now was headed in our direction, but a few moments later the chase fizzled. The border collies quit.

The dogs eyed each other at a safe distance with tongues hanging.

I suspect the collie let Fred gain on him.

If we hadn't turned in for dinner I have the feeling it would have ended up a game of chase, like the dogs and coyote below.