The weather forecast was for sunshine on Thursday, so I drove to Arcata on Wednesday.

It drizzled on and off the next day.

Spring storms had uprooted a few trees, but spared the video camera in the fir tree.

When I reached it I saw worrisome droplets of water inside the Fresnel lens over PIR sensor, but my paranoid fears were for naught, the camera was still perched on the limb.

After unscrewing the lag bolt I took a close look at the tree vole nest, and realized something had destroyed it.

The nest cavity had apparently been only an inch or two under the surface of the fir needles, but it was no longer a solid mass. The core of the nest had been torn apart.

We retreated to the truck, uploaded 12 video clips to my laptop, and found only 2 contained footage of the vole.

The other clips contained other arboreal visitors.

What follows is not exactly action-packed, and the jury is still out as to the identity of the nest wrecker.

But if you want to see the voles and the suspects, have a look. 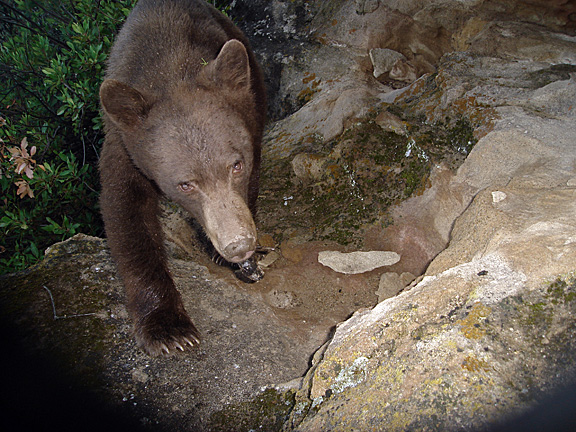 This image of a young black bear is from the Chimineas Ranch, taken at set 551.2 last November.

Craig checked the camera in mid-March. The cams are often inaccessible in the winter, so its a long haul. But we've gotten over 4 months of battery life using 2 external D cells.

Twelve days after the camera was set the bear climbed the outcrop to reach the bait and eyed the camera.

Craig still has a few cameras to check in the back country at Chimineas, and  soon I'll also be checking the cameras in Humbolt County, as well.
Posted by Camera Trap Codger at 8:29 PM 9 comments:

"The dog is not for sale"


Background: My friend Reno Taini and I recently had the pleasure of spending an afternoon with Oliver Gordon Young. We had both read "Tracks of an Intruder" his 1967 book about hunting with the Montagnards of northern Thailand. Reno and I may fancy ourselves as "old Asia hands" , but Gordon is the real thing. He was born in 1927 into a Baptist Missionary family in a remote village in Yunnan, China, had Lahu wet nurses, and spoke their Tibeto-Burman language long before acquiring proficiency in English. Like most missionary families, his had a deep understanding of local languages, customs, and beliefs.   I'll write more about his life and times, but here I want to share his story about match-making for Teddy, his Lahu hunting dog.

"Did you ever encounter indigenous breeds of dogs in the remote hills of northern Thailand", I asked.

“Yes, there was a breed in the Lahu villages that looked like a small Alsatian – brown and off-white coat with pointy ears, but smaller and more delicately built, and the tail carriage was upright – not like an Alsatian”.

“I had one named Teddy, given to me as a puppy, and he came from an excellent hunting dog line”.

“They’re known to chase game silently, and Teddy barked only when he cornered wild pigs and deer”.


“Teddy’s favorite pastime was fighting stray semi-feral curs quite numerous in those days.

"I remember the time, just outside the compound’s gate, he had pinned a cur to the ground, and seemed to want to hear 'uncle' just one more time.

"I ordered him to ‘go home’, but he just looked at me sheepishly, wagged his tail that he’d heard me, and the theatrics continued.

"I ordered him again and he finally quit, but not before cocking his leg and peeing in the vanquished cur’s face.

"My wife was with me in the Jeep. We couldn’t believe that purposeful gesture.

"I was smitten with Teddy’s breed, and considered it probably the best type kept by the Lahu people as hunting dogs.

"I also wanted to find Teddy a mate, and maybe even start a recognized hunting dog breed.

"While conducting an ethnographic survey in the late 1950s I thought at last I had found the perfect match in a Shehleh Lahu village near Doi Mak Angklang in Chiang Mai Province.

"The dog was sleeping soundly in the shade of the headman’ s bamboo and thatch-grass house, and she was exactly what I was looking for.

"The chieftain said she was a good hunter, and she always obeyed when he told her to back off a cornered boar.

“The more he talked about that dog the more interested I became.

“The chief had two good-looking daughters, rather buxom girls between 14 and 16 years, which is marrying age for mountain people, and as was the custom they served us a meal, hill grown red rice with a mustard green curry and a fresh-killed chicken.

“We were sitting round the hearth in his hut, and I offered him 100 bhat for the dog.

"It was a reasonable offer in those days, but he replied “Hpuh chi haw a-hpeh meh”, which means ‘The dog is not for sale’".

"Well, every man has his price, so I offered him 200 bhat, and again he answered, ‘The dog is not for sale’.

”My assistant, Chanu, whispered to me 'Wait till we finish the meal, and then offer him 300 baht'”.

"when we finished eating I made my final offer, and once again the chief repeated ‘The dog is not for sale’.

"I couldn’t believe my ears.

“I just offered you the bride-price! 300 bhat! Does it have to be in silver?

"The chief replied, 'You can have both of my daughters for 300 bhat each, but I will never sell the dog. Hpuh chi haw a-hpeh meh!'"

Acknowledgement: Many thanks to Gordon and his daughter Debbie Chase for hunting down the family photos for this post.
Posted by Camera Trap Codger at 9:08 PM 7 comments: