Bear spray with a happy ending 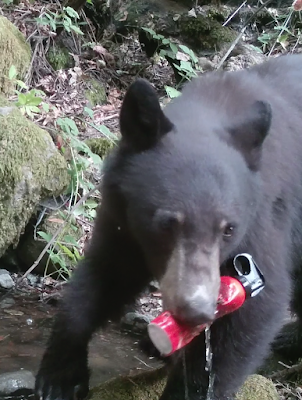 Screen shot of Napoleon
with my bear spray
What creepy thought comes to mind when you find a tooth-punctured canister of bear spray deep in the woods? Yes, some poor sod made his last stand against Bruin and lost. In this case the poor sod was me, but my can of bear spray made the ultimate sacrifice.
Last June I absent-mindedly left my bear spray behind when I set a trail camera beside a seasonal creek. A bear visited 2 hours after we left, and during the next 3 months the camera video-captured bears on 50 occasions.
Unfortunately, I don’t have video proving that Bruin got the big surprise while munching the canister. My lost bear spray was not in the camera’s field of view, at least not initially. But after it presumably exploded in the jaws of a bear -- it became a bear toy. I have video sound tracks to prove it. You can hear bears rolling it on the rocks and crackling the metal in their jowls.
The canister mysteriously appeared at the edge of a video clip on day 53, and remained in view of subsequent clips until a yearling cub retrieved it from the water 11 days later. This bear -- I call him Napoleon -- seemed to make a statement. He walked up to the camera and dropped the can there.
It didn't stay there. I found it several yards downstream in the dry creek bed, and how it got there I'll never know. It didn’t smell like pepper spray, but its remaining chemical taint gave me a coughing fit. The crumpled bear spray canister now resides in the clutter of my garage and workshop – a souvenir of another adventure with a happy ending.
Posted by Camera Trap Codger at 10:38 AM 2 comments: 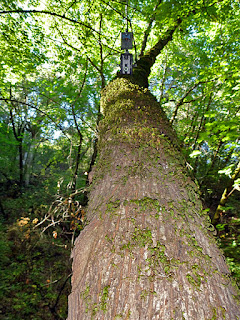