A snag with possibilities 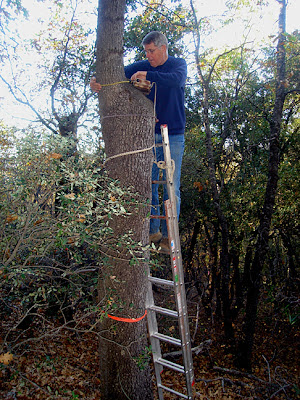 I'm always on the lookout for good snags. The goal is butt-rotted snags (with hollows at their bases), snags with cavities and nest holes higher up the trunk, or snags with broken tops. It's a old mammalogists' habit. You never know what you're going to find inside a good snag.

In my old collecting days there was always that cheap thrill of anticipation when you fired up the bee smoker and blew smoke in the hole. Back off if bees and wasps start to evacuate. Keep puffing if you hear something stirring inside.

When frass and punk wood start to fall get the net over the hole and brace yourself. Whatever is in there, it's going to come out in a hurry and with a bad attitude. It may also want to eat your face.

If you don't have a bee smoker, a human smoker will do in a pinch, theoretically.

We got smoking Jim Murphy to light up and blow smoke in a hole in a sacred thabye (Eugenia) tree in Burma. Jim's a herpetologist, and he became terribly excited when we told him a big snake had gone in the hole. He really liked the idea, so we passed him lit cigarettes and coaxed him to blow faster as the locals stood by and watched in wonderment. The snake never came out, and Jim almost passed out. He didn't need a cigarette the rest of the day. On second thought, I think it's better to use a bee smoker.

Nowadays you might get an idea of what's inside a snag by sticking your digital camera in the hole and snapping a picture. (There are also some high priced video gadgets for sale that do the same thing and even more.) If you decide to try this, bring a chain saw or a piece of strong nylon line. If you drop the camera, you can saw the tree down, but it's easier to fish the camera out if you've tied the line to it.

I've been looking for snags where I can get an inside view of what creatures come and go. Below you can see the inside of a promising snag not far from my house. It has two openings, one on top, and one on the side. I perched on the ladder to take this picture looking down the hole on top. The pale line you see in the photo is a stick marking the hole on the side. 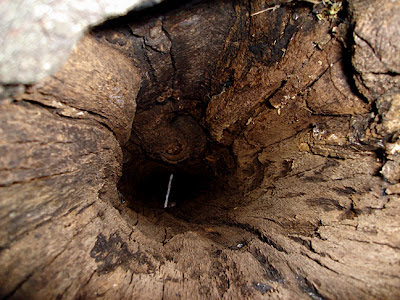 The tree probably snapped off in a wind storm, and the resulting hole on top is shaped like a rounded triangle -- just big enough to accommodate the triangular arrangement of the camera trap's lens, flash, and sensor. I fastened the camera trap with a bungie cord and adjusted its angle with an aluminum rod strapped to the trunk. 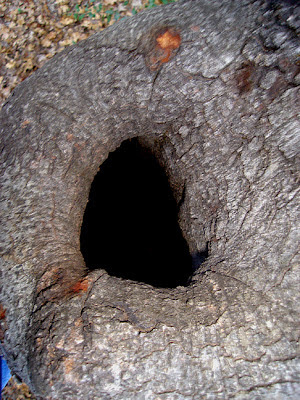 The hole on the side of the snag is big enough for a squirrel or small owl. I smeared peanut butter inside the entrance and on the side walls. As I was doing this the camera snapped a couple of pictures. That's good. I'll wait a week to see if any squirrels go for the bait. 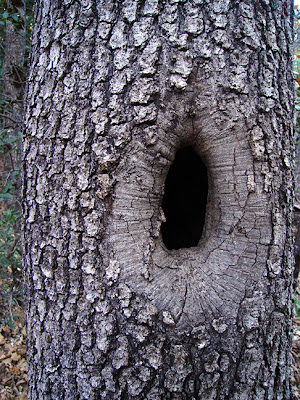 Posted by Camera Trap Codger at 8:20 AM

I have had success finding nesting Screech and Saw-whet owls by tapping the base of trees that have natural cavities or woodpecker holes. They will sometimes peer out of their hole to check out the intruder.

I'd never use smoke on an owl hole, honest! But I've tapped flying squirrels out of their holes in ole Virginny. To catch them on the wing you need an entomologist with a aerial net.