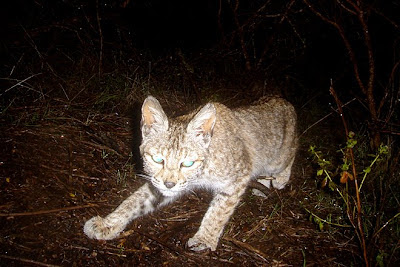 The four cameras we left in the Santa Cruz mountains a month ago took 244 pictures.

I expected at least a few coyote pictures, as there was plenty of scat to be found. We camouflaged only one of the cameras, so maybe wily coyote was camera shy. The rest of the cast was the usual assemblage of skunks, deer mice, woodrats, brush rabbits, and raccoons, as well as a varied thrush and a hermit thrush.

The camera hog was a young bobcat. Twenty+ pictures of it were on 3 of the 4 cameras. Most of the photos were taken at a small creek, really just a rivulet, where it seemed to be waiting to ambush thirsty birds in the morning. That was Reno's camera, and he was as happy about the photos as he was about finding some prime chantarelle mushrooms, which he generously shared with us. Good man!

I say 'young bobcat' because you can see that it still has to catch up with the growth of its ears, and obviously hasn't reached its fighting weight. It made several skulking passes by my camera which was hidden under some coyote bush on a grassy hillside. I suspect it was the castoreum that attracted it. 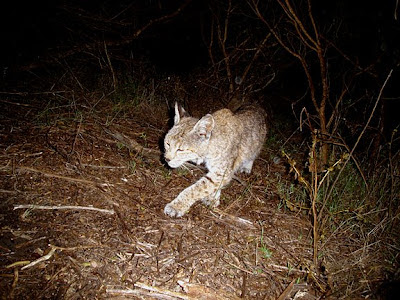 The tear in its left ear told us it was the same curious cat. It had no qualms about facing the camera. 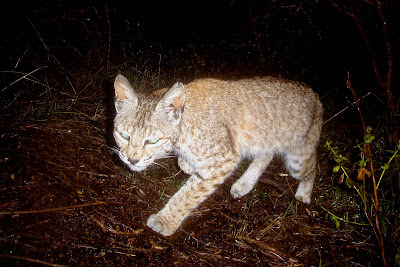 I have to say I thoroughly enjoy reading your blog! What fun you must have.

I was wondering if there are still feral pigs in those mountains. I remember feasting on one...and discovering fresh horseradish mixed equally with coarse, homemade applesauce is heaven with that pork.

Beverly
(a 5th generation Californian and yet another redhead. :) )

Yes, there are feral pigs in the Santa Cruz mountains, and I was expecting pictures, but apparently they are not that common yet. The only good thing about them here is that they are an additional food source for mountain lions. I informed the redhead about that horseradish applesauce condiment. Sounds excellent, and we must try it out. By the way, the chantarelles made an excellent linguini sauce.

The pigs are not that common yet? Hell, the time I tasted one was forty years ago! Perhaps they are no longer that common? You're mistaken though; they're good eats.

If this redhead was lucky enough to have her own biologist, perhaps she’d eat wild mushrooms, too. As it is, the only one she found and ate on her own was a Puffball (delicious peeled & sautéed...a lot like custard)...believing there to be nothing with which she might mistake it. I'm glad she didn't kill herself to death!

Rick Bass tells of finding chanterelles and with Doug Peacock and enjoying quite a feast while wandering around the mountains here in SoCO (looking for grizzlies)...but...well...I'm no biologist. I believe they did exactly as you with the 'shrooms; sounds yummie.

Suggest to your lady she wear gloves when grating fresh horseradish; it's nearly as bad as very hot peppers...that's why it's so good and can stand up with the applesauce to the boar. Some use a blender: http://www.globalgourmet.com/food/egg/egg1296/prephors.html)

Thanks for your lovely site!

You are an inspiration. I have been wanting to start using trap cameras in my spare time at our estate in Kerala, India. www.fringeford.com. Been doing some research on the net for a decent camera trap, have not been able to decide on a model and make; which model do you use? Which one do you recommend?
Would appreciate all the help.

Mohammed Sahib, Good to hear from a Keralite. I have many fond memories of the backwaters, Perambikulam, Guruvayur, Cochin, the breezy sholas of the western Ghats, and other places, and know you have some wonderful wildlife to photograph. Check out http://www.chasingame.com/ for reviews of various commercial models. These are all US made/distributed products, however. So you may want to look into Indian products. I know that there is a small team in Bangalore (Indian Institute of Science and Technology) that is producing a serviceable camera trap. It, like many "homebrew cameras" uses a point and shoot digital camera driven by an external controller board. You will need to do some websurfing to find their site, or you could call around. You might want to call R. Sukumar's lab and just ask. Keep me posted, and good luck.

PS to Mohammed: Check out the blog and do a search under "equipment". You will find comments on the cams I have used. "More background" tells how I got started making my own using Pixcontroller.com parts, which unfortunately are no longer going to be available, though you can buy assembled camera traps from them.

I must congratulate you on the number of photos you got from the "curious cat". I am currently working on a camera trapping research project on bobcats at Virginia Tech. I was just searching camera trapping and stumbled upon your blog. Our last trap season we had a total of 1202 photos of various animals, 6 of which were bobcats. Did you get any other cats or just the one? Nice pics as well.

I am pretty sure we got just the one cat. Good luck with your studies.