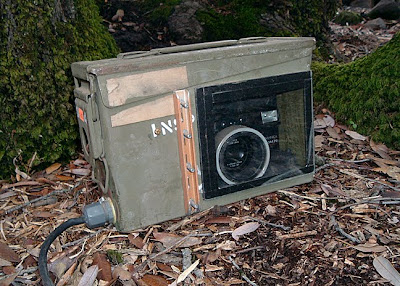 My first home-brewed camera trap was inspired by reading the trail camera forum in Jesse's Hunting and Outdoors Website.

It was bulky, and even when camouflaged in the woods it still stood out like a sore thumb.

The solenoid was touchy, and fine tuning it could waste half a roll of film.

But it was cheap to make.

I already had the camera, a point and shoot Yashica E-Zoom 70, and neighbor Richard generously donated a photoelectric sensor -- a Maxi-Beam Power Block which required a 6 volt battery.

I pulled the requisite 6 volt battery from a spot light. No added expense there, as long as I was willing to switch the battery back and forth.

The only thing I had to buy was the housing -- an army surplus ammunition case.

The resulting contraption was my own creation,  and I was pretty happy with it.

Then I web-surfed my way to a new discovery -- that one can also hack digital point and shoot cameras.

Digital cams were a lot more expensive than film cams, but have many advantages.

The scariest thing was taking a brand new camera apart, drilling holes in the case, and soldering wires to tiny internal contacts.

Now I am a hopelessly hooked hacker and have lost count of my hack-jobs -- at least 50.

Today I dusted off my first home brew and studied the photoelectric sensor.

It has much to commend it as an alternative to the passive infrared (PIR) and active infra-red (AIR) sensors most remote cameras rely upon to trigger pictures.

If I can adapt it to another camera, you'll hear about it here.
Posted by Camera Trap Codger at 9:20 PM

That's beautiful. What was the best photo you captured with it?

You are a highly evolved camera trapper codger.

I got tons of squirrel pictures, and some fairly decent ones, but all of the "cutesy" variety. And what a pain getting film developed, when you can download the pics for free. Nowadays, the Camera Axe and Arduino micro-controller are sounding very tempting, especially for action shots of air-born squirrels or bats.

Great to see one of the early builds CTC. Those were fun times making cheap game cams when the factory ones were going for $400 a pop. And film to boot, I pestered the 1 hour photo dept every week with a new roll of film.

Keep up the good work, I enjoy your pics and commentary.