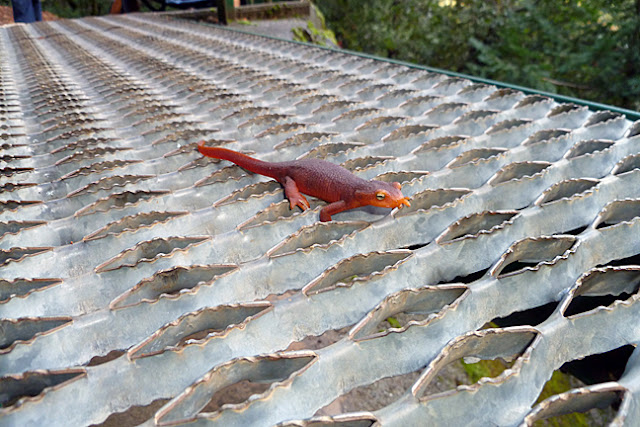 If your ancestral breeding ground is the engineering wonder known as the Butte Creek Flume, reaching the pool of conjugal bliss can be a dangerous odyssey.

I'm speaking of Sierra newts (Taricha torosa sierrae), which my observations indicate are not content to just drop into the flume when they find it.

Instead they follow the path ridden and trodden by bikers, hikers, dog walkers, and galloping dogs -- most of whom pay no regard to pedestrians like banana slugs and newts.

At some point of course the survivors find the pool of choice.

I stumbled into this newt today shortly after it ascended the on-ramp to the catwalk, and I watched as it newt-walked unerringly to the far side -- a span of 20 feet.


Nonetheless I found it worrisome.

The path wasn't straight and the spaces in the expanded metal were big enough for the newt to fall through.


If it fell off the catwalk it wouldn't be the first time.

A few months ago I stumbled into a bloody gentleman here.

He was about my age, and had stepped off while adjusting his wrist watch.

Just stepped into space, lost his grip on the handrail, and slid down the gunnite wall below, de-barking elbows and fingertips along the way.

"I'm okay", he insisted when I offered to get the truck, "but I'll feel it tomorrow morning."

I haven't seen him since, which can mean only one thing: his wife grounded him.

It could happen to me.

My camera trapping ventures would be restricted thereafter to a 50 foot radius of the house.

I studied Sally again, who was still on course with 15 feet to go.

I picked it up anyway, crossed the bridge, and released it on the other side.

Sally didn't miss a beat, and just kept going in the same direction.

Good post codger. Our slimy friends are all too neglected.

Good for you! I would have done the same.

According to the late Victor Twitty
author of "Of Scientists and
Salamaders" the Newt has a strong breeding site fidelity.
He/She was just headed home and perhaps taking a shortcut?