At last the hard-to-get Sonoma tree vole, the secret of the Douglas fir forest, the mainstay of Northern spotted owls was captured in pixels.

I hope you are sitting there in wonderment as you view the seldom-seen rodent at work in its nest 35 feet above ground.

And if you want to fill in the picture conjure the feel of the damp coastal air, the woodsy scent of conifers, and the murmur of the Mad River.

The cams had been in the field for 70 days, but the batteries in this one called it quits on November 20th, only 18 days after we made the set.

But 267 images is still a good haul, so we uploaded to my laptop on the tailgate of Terry's pickup, and as we flipped through the images we found that the vole's nest had a life of its own.

Indeed it expanded and deflated like a slumbering mini poodle, and several shots showed a centipede and a millipede grubbing about in the midden of resin ducts and twigs. 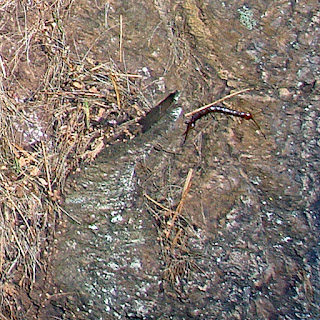 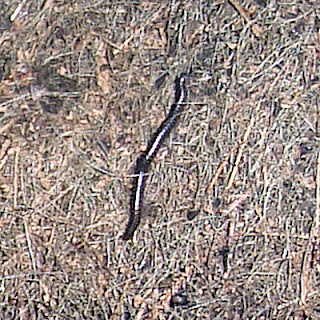 The tree vole on the other hand exposed itself in only 10 pictures, and of those only two were full body shots.

She revealed her tail and slender hips,

but most of the time she was hauling and hidden behind twigs of Douglas fir.

Back home I retrieved my Arborimus file and found that our modest success was a far cry from that of Eric Forsman and his colleagues at Oregon State University who studied the related red tree vole (Arborimus longicaudus).

Using a commercial video camera system they captured and analyzed over 300 days of videos totaling 6700 hours, and refuted the belief that tree voles are "slow, docile and somewhat clumsy climbers".

That dubious reputation was based on observations of sleepy and confused tree voles that had been rousted from their nests during the day.

On the contrary, they found that foraging voles "were often so rapid it was hard to follow them as they scurried in and out of the nest."

That speed explained why over 95% of our pictures were blank; the rodent activated the camera trap's sensor but was usually gone when the shutter released.

As for the changing size of the nest, successive photos show resin ducts accumulating at the top of the nest and then sliding down.

It seems the vole's favorite feeding perch might have been just above the camera's view.

One of these days we'll take on the tree vole with a video camera, but I make no promises as to when.

I have two DXG 125s on the work bench, but hacking an HD video camera is far more intimidating than a point and shoot camera.

wow. That is SUPER super cool. Huge congrats and pats-on-back.

AWESOME!!! Way to be persistent! I'm SO gonna tell my bio-dork co-workers.

Your recent posts seem to correlate with my personal life! Earlier was the flying squirrel post (success! 10 traps set, 10 tripped, 4 deer mice, 4 flyers!) and now the vole. I just got back from a week at my college's field station where I participated in a Winter Ecology course. We had small mammal traps out which yielded mostly Peromyscus maniculatus (deer mice), and 2 Blarina brevicaudas (short-tail shrews!). And THEN an instructor was walking back from a transect of traps with students, and she spotted a vole scurrying over the snow, and she pounced on it and caught it. Turns out he was a meadow vole! Very interesting little critters! Not sure if we have tree voles out east...

Hey BB, bio-dorks know how to have fun. No tree voles back there, Alyssa, but with Blarina and star-nosed moles the east has some pretty neat mammals.

Huzzah!, glad that there was some success with this set.
It would be neat to see a time-lapse of the nest, showing the expand & contract nature.

Just terrific Chris. What a great looking vole. Hope you do get a vid cam up there one of these days too. Beauties like this deserve the attention.

What a prize and the little guy looks good on the computer
Screen. Great work buddy!

This is fantastic Chris. You deserve a lot of credit for taking on a cam trapping project with this focal species. This species is secretive, nocturnal, arboreal, and not attracted to any of the usual small mammal baits since their diet is mostly fir needles. In other words, what a challenge! This is a species that most people (including biologists!) never get to see. Now we get to see it in action on our computer screens. Great job!

Glad you all enjoyed it. The vole that took to the trees is a pretty neat little creature.

Could you explain resin ducts and how they affect the nest size?

Two resin ducts run the length of each fir needle, and the voles reject the ducts when eating the needle. The ducts accumulate and contribute to the bulk of the nest.