Ah yes, I remember this camera trap fondly and chuckle.

It was set # 450, which means nothing to you and everything to me.

It was poorly hidden in a clump of ferns on a cut bank in Marin County, a so-called "trail set".

Now trail sets are not particularly imaginative, and they are often easily detected, but this one almost always caught its quarry off guard.

And among the wildlife that used this lovely trail were three sporting ladies.

They were regulars who would pass the camera Indian-file, just like black-tailed deer.

They could only reach the camera trap after a long aerobic climb of several hundred feet.

Then they would mount a small rise on the trail, descend a few steps, and in the silent splendor of giant ferns, mossy trunks, and stately redwoods -- blink blink blink -- three little red-eye flashes would intrude upon their reverie.

The big flash came a split second later, capturing their priceless reactions.
It was as if a vulgar little troll jumped out of the fern and said "BOO"!

After that rude introduction you would think these good-natured ladies wouldn't forget the troll, but on their next hike the little bugger caught them off guard once again.

I can only surmise that the peaceful exhilaration of their outing lulled them in a hiker's trance or perhaps a Zen-like frame of mind.

Even the Codger had a few Zen moments upon reaching the summit of the trail, most likely a consequence of anoxia.

Time passed, and Charlotte spun her web over the camera, but the little troll still jumped out and flashed when the ladies passed.

By now I sensed that the ladies were growing a little tired of the troll's merry pranks. 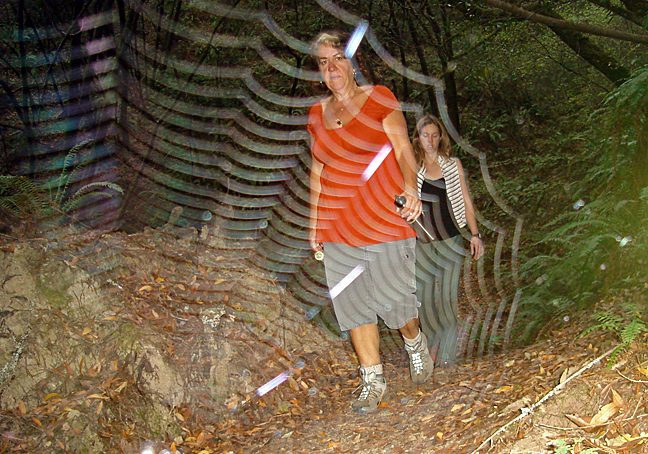 It was a turning point in the game, but I didn't know it.

The ladies were cooking up a scheme to outsmart the troll on their next outing.


A few days later they circumvented the troll's electronic eye with the stealth of commandos and thrust their surprise in its homely face. 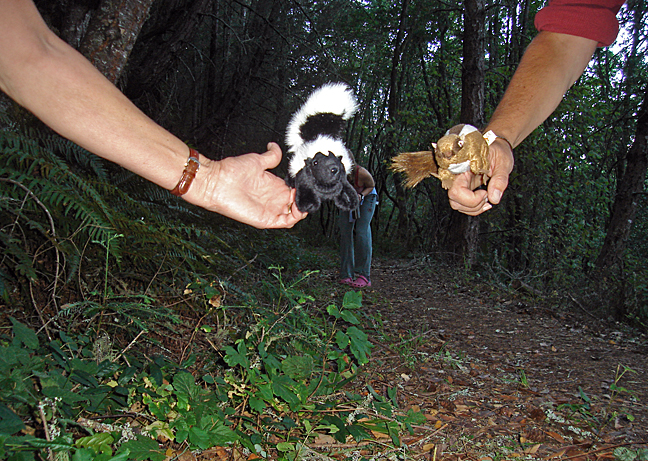 I think they were making a statement.

The lady in the shadows seemed to be intoning a curse. 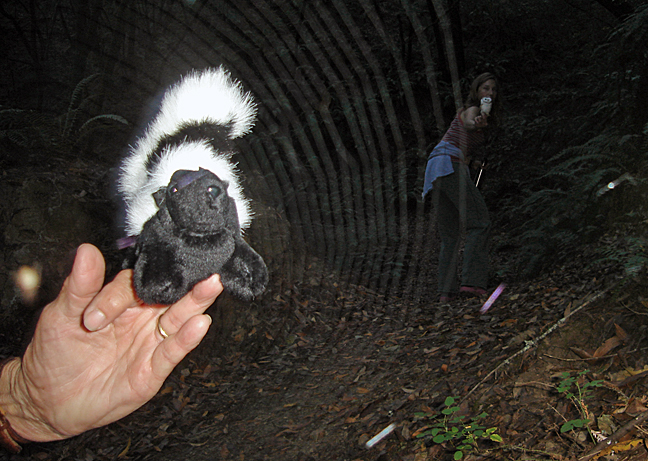 And the other lady got up close and personal.

I think I get the message.

Ladies, wherever you are, I want you to know the troll greatly enjoyed those fleeting interactions.

I know that your initial amusement, if any, was short-lived, but at least you treated the little bugger much better than bears or the rowdies who steal trail cameras.

Rest assured that the last laugh was on the troll and the Codger himself.

Postscript: The Codger hopes to meet the ladies one of these days and hike that trail for old time's sake. He promises to leave the troll home.  (And readers should know that these good ladies gave permission to use their images through an intermediary and mutual friend.)
Posted by Camera Trap Codger at 4:00 PM

That is hilarious! Good sports:)

This is exactly how bigfoot sightings start, you know.

The spider web screen is neat too!

I recently spotted a trail cam on Bolinas Ridge (I waved to it) and shortly afterward found a fairly fresh bobcat track. I emailed the MMWD to see if they caught a bobcat around the same time they caught me. Turns out there are so many trail cams out there, they couldn't answer my question! (The one I saw looked kind of beat: maybe it had been forgotten.)

This set brings back a lot -- what could have been ? The Raccoon w/ Dicamptodon, a most unrighteous theft ...

Excellent. But I think that's a non-native squirrel. :)

I laughed and laughed! Our camera has caught us off-gaurd once in a while. That was a great post.