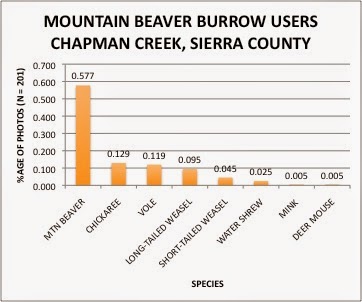 King, C. 1989. The natural history of weasels and stoats. Cornell University Press, Ithaca.
Posted by Camera Trap Codger at 10:33 AM

That was a great photo and discussion. Nice use of data collection and statistics to show that the photo wasn't really what it seemed to be.

Hi Chris
Very nice photo and interesting discussion.
Have you decided when you will be coming to Humboldt?
Terry S.

Good to see you posting again.

Woody, the juvenile mountain beaver was small and would probably be easy prey. An adult might pose more of a challenge, but weasels are deadly, as you know. . .