Beautiful snags I have known 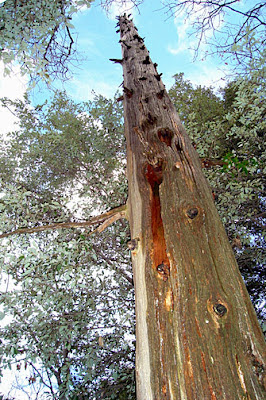 I've been attracted to snags ever since I was a kid. Initially my attraction was to the California acorn woodpeckers in the snags. They carried on noisily in their acorn granaries high in a few dead Douglas firs along the San Lorenzo River. That was near the town of Ben Lomond in the Santa Cruz Mountains, where the woodpeckers also stuffed acorns into the power poles. When the neighborhood kids came down the gravel road in the afternoon, Mr. Dickenson slowly leaned out his window and gazed up at the gathering flock of woodpeckers. He was an introverted show-off and woodpecker trainer, who moved in slow motion and rarely acknowledged our presence. We stood in wonderment as he drew back on his Whammo slingshot and released a ball of wonder bread sky high. Immediately the woodpeckers launched themselves upward in pursuit of the soaring bread ball, but only one would snatch it at the arc of its trajectory. The show continued till all were fed.

The most interesting snags around here are incense cedar. They don’t seem to form cavities readily, but when they die they stand in silent dignity like wooden Indians. There was a burn here many years ago when cedars were much more common on the upper slopes. Some enormous charred stumps and a few old upright veterans still remain. When the snags finally crash, they lie around for many more years. On the north slopes they grow a coat of moss, but eventually they return to the soil. Knots and sapwood are last to go. I can understand the persistence of knots; they are very dense and resinous. But why the sapwood lasts so long is beyond me. It readily decays in ponderosa pines; why not cedar? Even before the heartwood has crumbled away, great boards of sap wood unfurl and fall to the ground. Habitat for creepy-crawlies. 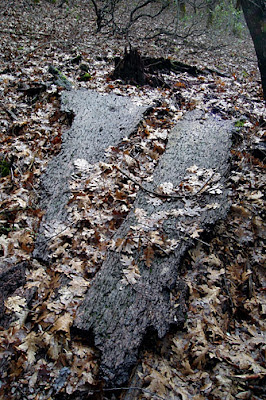 This lovely snag (the same one at the top of the page), has a 7 foot circumference and stands about 50 feet high. The heartwood has already crumbled away leaving a skirt of sapwood. 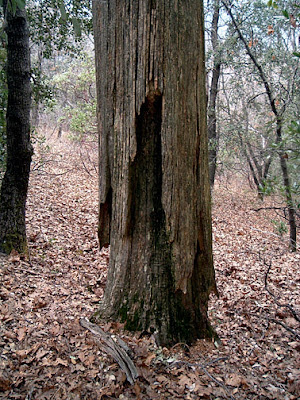 The knots of former limbs anchor the sapwood skirt to the softer underlying wood, but it's a tenuous connection. The protected surface underneath could shelter bats, but on this tree it's too close to the ground, and a snake could reach them with little effort. But the space is being used -- mice and squirrels have tucked acorns here and there. 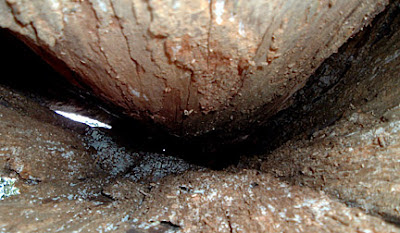 So how exactly do beautiful green trees became gnarly gray snags? Fire and root disease kill trees outright, but trees dying of these causes don't become hollow. And root-diseased snags don't remain standing for long. To get cavities you need injury from boring insects, lightning strikes, or mechanical damage and infection by wood-digesting heart-rot fungus. When you see a conk of fungus on a living tree, you know it is infected. 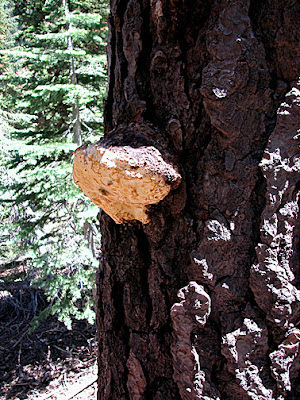 Not all tree species get cavities from heart rot fungus. Only certain ones are cavity prone. In northeastern Oregon for example, most hollow trees are grand fir and western larch. These trees provide nesting sites for cavity nesting birds. Here in the Sierra Nevada there are nearly 2 dozen species of cavity nesting birds, not to mention northern flying squirrels, western gray squirrels, red squirrels, bushy-tailed woodrats, several species of bats, martens, raccoons, and black bears. To an extent they all owe their livelihood to heart-rot fungi. The black bear also benefits from root fungi, which spread decay into the tree base. I guess foresters have a sense a humor, or they wouldn't call this condition butt rot. The biggest black bears benefit from butt rot, which makes splendid dens in big old trees.

We were always going to take out the dead standing aspens on the hillside in back of our cabin - but I now think we should leave them. Thank goodness. Sounds a lot easier!