Okay class, today we're going to see how the scientific method can be used to explore an important and unanswered question: how well do dusky-footed wood rats climb?

The irrepressible mammalogist Jack Cranford reported that radio-collared wood rats spent 40% of their time above ground foraging in shrubs and trees, and the late E. H. Vestal described a worried wood rat leaping three and a half feet—a rather squirrel-like achievement. So, it's fair to ask: is Neotoma fuscipes a confident and acrobatic climber? Or a cautious climber? It was time to subject wood rat to some climbing trials and put the camera traps to good use.

Where to begin? Go to the literature! Linsdale and Tevis, in their book "The dusky-footed wood rat" reported a rat climbing a poison oak vine. Poison oak vines come in various thicknesses, but cutting them for experiments can have uncomfortable consequences. So my first question was: can wood rat climb a 3/4" manila rope?

I tied the rope to an overhead branch of oak, and moored the other end to a log on the ground. Only by climbing down or shimmying up could woodrat reach the peanut butter feeding station in the middle of the rope. I hoped for a picture of him clinging to the line like a mountaineer. 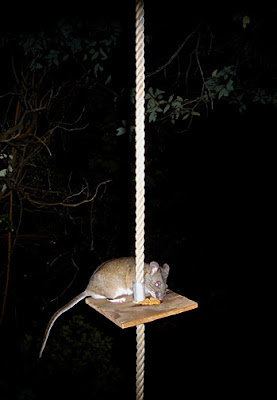 Wood rat accepted the rope-climbing challenge, and cleaned up the peanut butter the first night. In fact, he made several visits. I assumed that he descended the rope from the overhead branch. It seemed easier than surmounting the feeding platform. Whatever he did, he did it quickly, because there wasn't a single picture of him coming or going.

Time to "raise the bar". The next night I replaced the vertical rope with a 1/4" cotton clothesline. I also replaced the plywood platform with a bait cup strung on the cord.

No longer could he sit and dine.
He would have to feed while on the line.
Ahah! Two nights passed with nary an image.
Was the 1/4" line beyond his limits?

Or was woodrat digesting in the stomach of a fox or bobcat? It was too easy to discover his limitations, and I wondered whether I had somehow exposed him to danger. I mean, like...gee whiz...maybe he attracted a predator while scurrying about trying to reach the peanut butter.

Okay, let's make it easier for the guy. On night 4, I used the 3/4" rope to make a bridge. All he had to do was walk across the rope to the clothesline where the peanut butter was waiting. 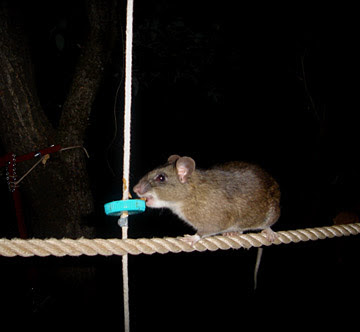 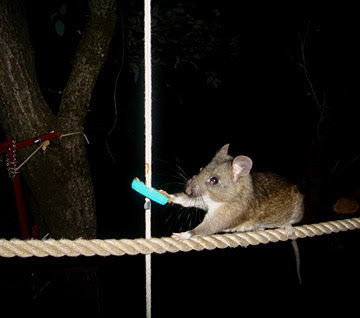 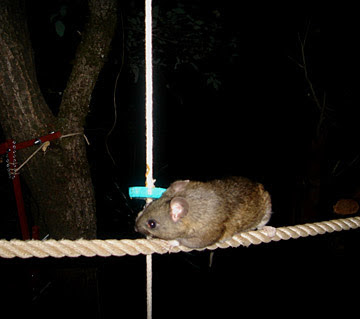 And that's exactly what he did. The next morning's photos showed woodrat alive and well, and eating peanut butter like there was no tomorrow. I could only conclude that he was no match for his crazy ninja Malaysian relatives (see the previous blog, mates). Climbing the vertical clothesline (1/4") was beyond his ability. He seemed a little resentful tugging at the cap and chewing the line, but he wasn't clever enough to cut the cord above the bait. The unfinished meal was still there. I felt a little disappointed and smug at the same time. But all that was to change. Wood rat had some tricks up his sleeve. (Stay tuned for the next episode). 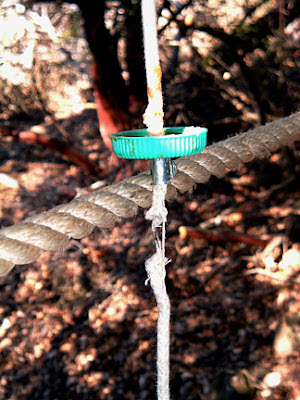 It's just one thing after another.