Is this a death wish? 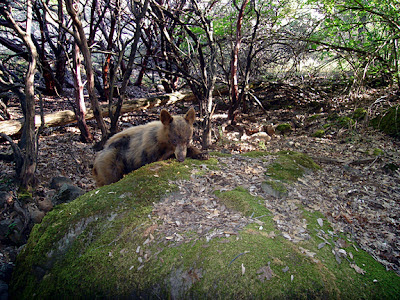 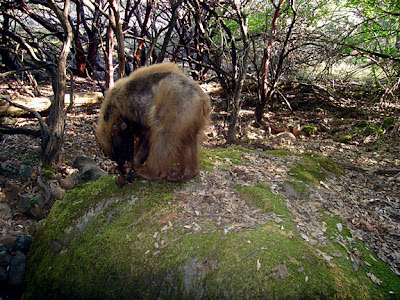 I know what you are thinking. "Has this guy run out of material?

Well, the answer is: "Photographically, yes (and let's hope the action picks up soon). But as fodder for armchair theorization, I find it fascinating that only two days since its last visit, the bear cub is back again checking out the area where the puma slobbered last week.

Why? Does this scruffy little bear have a death wish? I mean, why revisit a site where you know the predator has lingered?

To the contrary. The cub is gathering intelligence.

I would bet dollars to doughnuts that the bear . . .

a) knows that the scent on that rock is not its own scent, and

b) recognizes it as unusual or out-of-the-ordinary. In relation to the kaleidoscope of plant and animal smells it encounters in the course of a normal working day, it probably files this smell in the "suspicious scent category". [Scientists call the fear of the new (or unknown) neophobia.]

In addition. I would wager that scruffy the bear might temporarily avoid areas where the strange-smelling scent is frequent and fresh.

We know that carnivores in general live by their noses, and have remarkable powers of olfactory discrimination. While it might seem foolhardy to revisit the mossy rock, the bear cub can probably guage the age of the scent. A fresh mark by the mountain lion may well tell it that it is time to move on to another place.

To my knowledge, the definitive experiment has not been done to give credence to any of this rambling discourse. That's why it's fun being an armchair theorist.
Posted by Camera Trap Codger at 4:02 PM

Scruffy certainly looks like he could use some personal grooming! As for odors, maybe those are tantalizing, taunting and arousing? I've been camping and had raccoons all over my car and trailer. A little domestic cat has been sniffing under the vehicles in those raccooned areas intently, now that I'm back in a civilized area. Heck, I know people who love the smell of very smelly shoes and socks... odors, they definately tantalize some.

As for a scientific study on the subject, that would be totally unfair to a little bear cub, so armchair theorizing sounds good to me.

Well, one thing I've learned is that the scent of a puma doesn't scare the potential prey animals away. It seems like it might be a stronger atrractant than the usual scents that show up there.

Thanks for those thoughts.