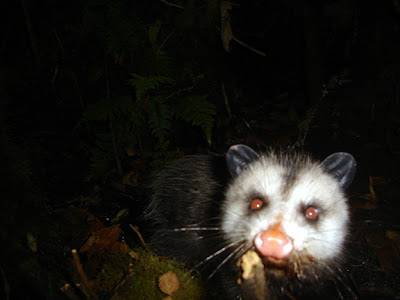 The Virginia opossum was one of my last camera trap visitors at Point Reyes National Seashore. As reported in my last possum post, this curious possum was also attracted to the electronic flash and gazed inscrutably at modern technology.

The Virginia opossum is one of California's recent mammalian immigrants, but the history of its colonization raises many questions.

What we know is that California's ancestral possums came from MacDonald County, Missouri and Jackson County, Tennessee, and probably other places as well, though no one knows for sure.

Those pioneer possums were tough. It would have been a grueling cage-rattling trip on the transcontinental railroad, but they could have toughed it out during the warm months. Sea travel would have taken more time, and seems less likely, but their sprawling "sea-legs" would have served them well.

At the turn of the last century the Golden State had much to offer its citizens in the way of wildlife, including grizzly bears, but her settlers from the South missed their possums. Possums may not be challenging quarry for the hunter, but memories of baked possum and sweet taters summoned mouthwatering cravings.

Early Californians kept penned possums for food, but they didn't keep them for long. I suspect the possum farmers soon grew tired of their chores, and decided it would be a lot easier to harvest wild possums. Maybe that's why one W.D. Watkins set five Missouri animals free about 3 miles south of San Jose. That was back in 1900. We don't know if they survived, but if they did, rest assured they went forth and procreated. In 1910 several more possums are said to have escaped from a San Jose jeweler and possum fancier. His seven possums came from Tennesee. Apparently possum owners in Los Angeles also had a hard time keeping their stock penned.

By 1913 one hundred opossums had been captured in the greater San Jose area (Santa Clara County), and by 1915 they had apparently made their way over the coast range into the San Lorenzo Valley in Santa Cruz county. This route would have led venturesome possums to the coast, and to easy routes north and south.

An attempt to introduce possums to mountainous Shasta county failed around 1932, but possums from San Jose spread into the San Joaquin Valley, circumnavigated San Francisco Bay, and thence colonized the northern coast range, the Sacramento Valley, and the northern foothills of the Sierra Nevada.

You are looking at a descendent of those hardy pioneer possums. The foggy windswept coastal scrub of Point Reyes is a far cry from the bottomlands of the south, but like the rest of us here, Br'er possum is quite at home. 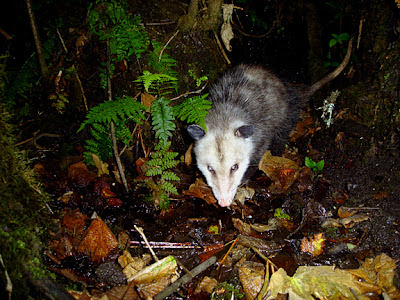 What great writing! I'm happy to have found your blog. I'm a transplanted Californian delighted to be living in a wooded wetlands in rural/suburban New England. We have a foot of fluffy snow right now. But while you can take the gal out of California, you can't of course take the California out of the gal; here on my desk I have a dish of sea-polished green rocks from South Beach at Point Reyes, and a bay leaf releasing its vibrant fragrance.

I enjoyed the California possum history! Thanks again. I'll be eagerly exploring these pages.

Thanks Sarah, if you need more bay leaves, let me know.

Great possum history, Chris. Made me flash back to Joe Hall's mammalogy class...

A lot of folks think Possums are ugly creatures but we think they're beautiful. We have a family that come around our home each night looking for a small handout. I often wonder why so many are seen dead along roads killed by collisions with vehicles. Are they at the wrong place at the wrong time or attracted to bright lights or just not very intelligent? Does anyone know?

I ran across your blog today while trying to find out if there truly is a difference between "opossums" and "possums". Love all your photos and information so much I've placed a link to Camera Trap Codger in my blog posting. Thanks for the possum information (there seems to be a difference of opinion as to which live only in Australia - what is your take on this?)

Hey Chris.
I came across this typically great post while doing a little online review on the status of the opossum in California in the face of climate change.

I didn't see this paper on your list and thought it might be of interest. It seemed to include more details on the establishment of the species in the west.