Back on the mountain -- part 4 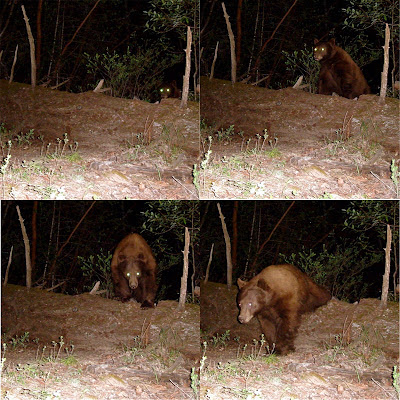 All travelers have to cross the log. There's no easy way around it. The camera trap captured each step as the bear surmounted the obstacle. It was 1:00 in the morning, April 17th.

Suddenly the camera's flash seemed to register. He reared up on his hind legs with a slack-jawed look of surprise. Maybe it was a threat. Maybe he was just trying to see what it was that flashed in the dark. I would guess he had never seen such a thing before. 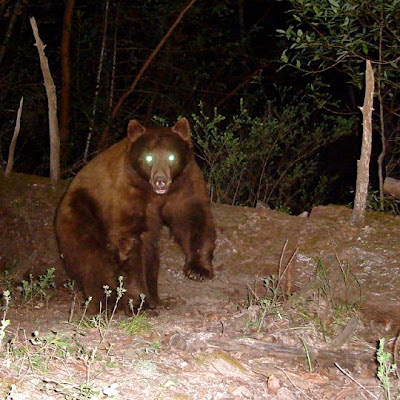 The next few pictures show the bear ambling about between the log and the camera. Then he approached and tried to fathom the thing with his senses. The flashing continued. 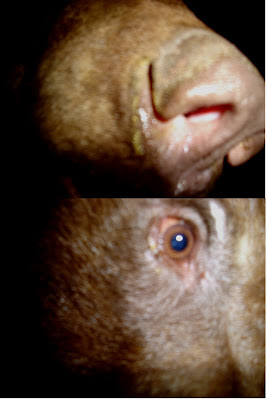 Good bear! He left only his breath on the lens. 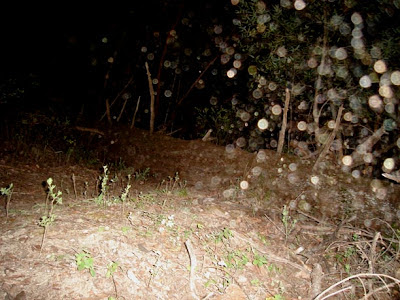 Several days later a gray fox and bobcat climbed over the log, and six days later the bear came back at 2:00 AM.

He must have noticed the flash again, and maybe something just snapped. The good bear turned bad. It was a clear case of assault and battery. He tore off the bear guard, opened the camera case and tore out the camera. He bit the camera just hard enough to jam the menu panel and the lens, which is now permanently extended at an unnatural angle.

My camera trap is finished. This is the down side of camera trapping. 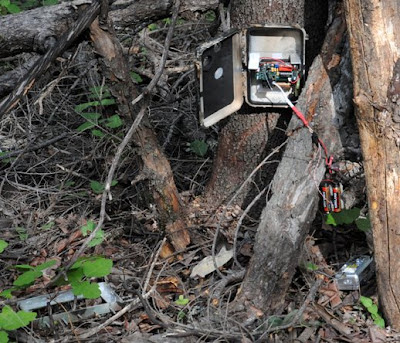 The bear is recognizable by a small notch in the right ear, and over the three week period he encountered three out of five camera traps.

His first encounter was on a sunny morning, and he only approached the camera to examine it. When he found the camera two days later in the middle of the night he pushed it down, but didn't damage it.

Seven days after that he came upon the second and third cameras. He walked on by. I suppose he just wasn't in a mood for tinkering that day.

But when he met up with the second camera 6 days later he decided to examine it thoroughly.

I don't really think he snapped or that he's a bad bear. But he taught me a recurrent lesson of life. You always get a surprise when you think you have it all figured out.

The spiked bear guards are not the final solution to curious bears.

Maybe I need a constant reminder, an anti-trophy to hang on the wall.

How about this? I could mount the camera on a walnut plaque, frame it with the defeated bear guard, and include a picture of the great brown tinkerer wearing that slack jawed look of surprise.
Posted by Camera Trap Codger at 2:50 PM

WOW! I know the feeling because that happened to me twice last year. I hope neither of us has that kind of luck again. Nice pictures though.
Bob

This truly is a grand series of posts!

Chris great photos and story.
Too bad about the camera but I guess it was worth it. I think you need a metal locking camera enclosure with the appropriate windows. This experience will provide you with a great story for your upcoming class this summer.
So far I have not struck "Beaver gold" yet. I won't give up.

Yes, it's back to the drawing board on these bear guards. Perviously they were attached to the camera case. Now I am going to cable them with the camera case to the tree.

Amazing shots! I really enjoy your blog, and that bear sequence was stunning. Though I think maybe you should mount the destroyed camera with the photo of just the bear's eye. It looks pretty intimidating. ;-)

I love the pic of his eye peering into the lens. Sorry he broke your camera though.

Humans should react so healthily to surveillance.

Get a life. If you want to be with nature, don't do it through the proxy of a lens. Well done, bear.

Hi, FYI your blog post is on Slate.com in an article about the potential negative effects of camera traps on animals. It does say that they're generally a good thing for observing wildlife and deterring poachers but points out that the noise and flash can be irritating to animals. How about getting a quieter camera with infrared?

To the commentator above me, if you're going to post nasty and irrational comments, doing so anonymously is even less brave than using cameras to observe predators. YOU get a life.

maybe a joke, but this phrase/attitude bothers me. the bear is in its environment, and this robot freaked it out! i am a photographer, and cinematographer as well, and in school i studied under George C. Stoney who lectured us on the ethics of affecting your environment. was it his ghostly voice in my ear that was cheering on the bear as it tore apart the camera? perhaps.

Why is a flash being used??? Your cameras should be outlawed.

Heisenberg, wasn' it? an object will change its behaviour if you observe it